Most radar sensors designed for applications in autonomous systems output what are known informally as raw detections (or targets). These are the direct result of applying standard peak-finding algorithms like CFAR on returned signals converted to the frequency domain.

The "peaks" of this multidimensional data correspond to detected objects; depending on the algorithm used, the resolutions of the sensor and so on, there may be many such detections - for example, from the K79 imaging radar. In this case, we may not necessarily care about the geometry of an object inferred from the group of targets but rather seek a stable detection of the object over time for applications like collision avoidance. We refer to this as a tracked detection (target), and it involves additional processing either on or offboard the radar in order to aggregate information from the many individual returns.

The basic idea behind implementing a filter which outputs tracked targets from periodic scans of raw targets is to maintain the state of potential objects and update them with new data as it arrives, and publishing these objects only when they have been stably tracked for some time.

Consider the figure below. In the top row, the detections evolve over time as the objects move around; even as the cross one another's paths, assuming the framerate is high enough, it's not terribly difficult to "connect the dots" in range-doppler space to track them. The second row is much more realistic, however - there are many returns from each object, plus background noise, which make it difficult to tell where the objects move and even how many distinct objects are in the scene. The final row shows the solution we seek for the tracking problem. 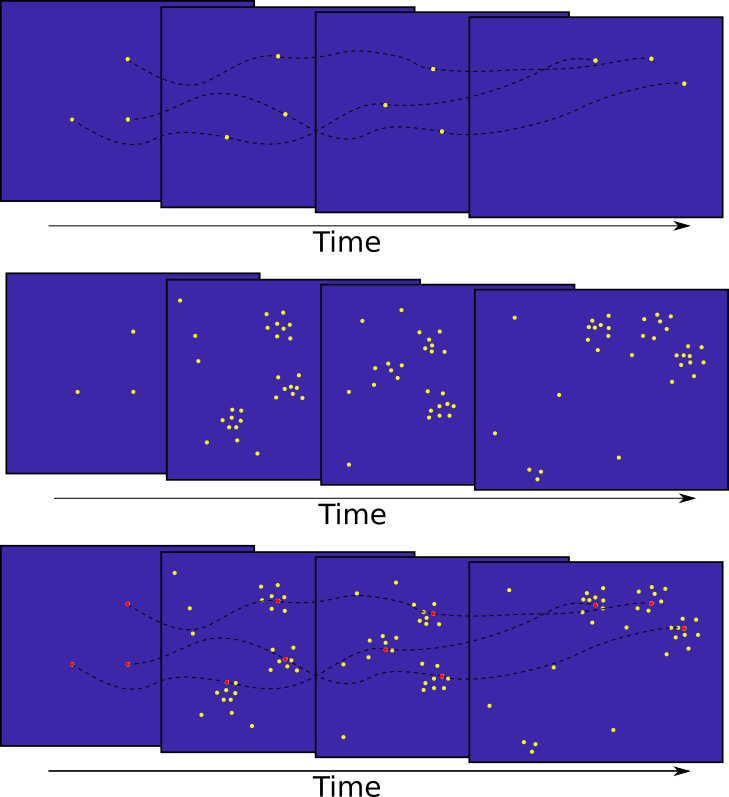 The tracking filter is essentially a bank of simple Kalman filters, each maintaining the state of a tracked object in spherical coordinates. The flowchart below describes roughly how the filter works. 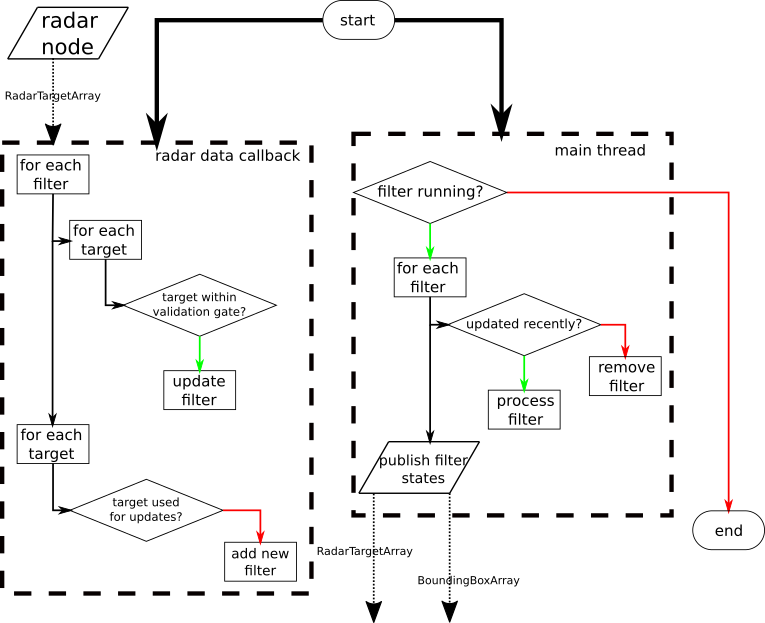 Essentially, a main thread continually updates the filters in the bank using the process model, while new radar data triggers a callback in which detections (targets) are evaluated against the existing filters in the bank. If a target is consistent with a filter's state, it passes through that filter's validation gate and triggers a Kalman filter update. If a target is not consistent with any filter, it is pushed back as a new filter. If a filter has not been updated within a specified timeout, it is removed from the bank.

The state of each instance of the filter is

and the process model is simply

Or, in the matrix form

where F is the state transition matrix, L is the process noise matrix, and

are the process noise on speed, azimuth and elevation angles, respectively. These are each assumed to be normally distributed with specified standard deviations.

Or, in the matrix form

where H is the measurement model matrix and

are the measurement noise on range, speed, azimuth and elevation angles, respectively. These are each assumed to be normally distributed with specified standard deviations.

As detailed on the ainstein_radar_filters documentation, the tracking filter node has the following structure:

The default parameters for the underlying Kalman Filter which is run per tracked object were tuned for people tracking using the K79 imaging radar. For other radars and applications, it may be necessary to re-tune these parameters for better performance. The parameters and their descriptions are listed below.