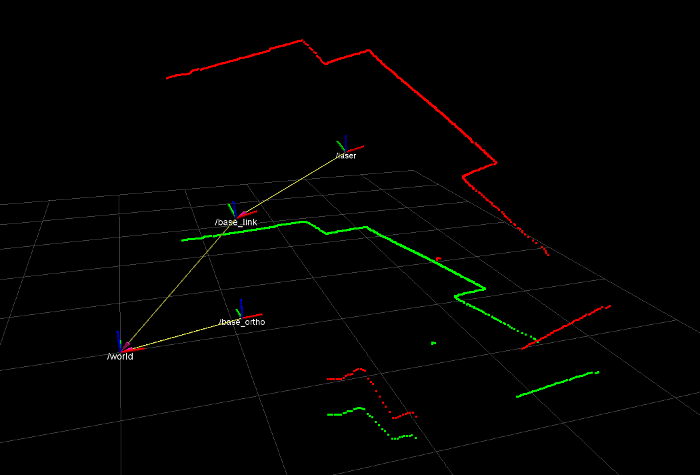 The package is intended as an intermediary step to transform laser data, before passing it to another node that performs scan-matching (for example, laser_scan_matcher or slam_gmapping). It works under the assumption that the environment is rectilinear in the z-dimension, meaning that obstacles look the same, regardless of the height where they are observed. This assumption typically holds for indoor spaces.

The orthogonal projector can be used for vehicles with varying roll-, pitch-, and z-pose that travel in indoor environments.

Alternatively, it can be used for vehicles that travel in 2D, but have a laser scanner that is mounted at an angle to the horizontal plane.

Laser scan data is often used to calculate the motion of mobile robots in static environments. Most scan-matching implementations assume that the robot only moves in the xy plane, and calculate the translation and rotation that best maps two sets of points from consecutive laser scans onto each other.

Attempting to apply this technique directly to robots in 3D presents two key challenges. The additional degrees of freedom (z, pitch, roll) impose a greater computational cost. More importantly, the data obtained by statically-mounted planar laser scanners is not sufficient to correctly determine the change in the 3D pose.

In most indoor environments, obstacles look the same regardless of the height. If we know the 3D orientation of the laser scanner, we can reduce the problem of 3D scan matching to 2D by projecting the scans onto the xy-plane.

We also calculate a transformation between the world frame and a orthogonally-projected base frame of the robot (labeled /base_ortho in the figure above), and publish it as a tf transform.

Note that projecting the scan from an arbitrary roll and pitch results in points that are no longer equal angles apart. Thus, we pubish the projected scan as a pcl/PointCloudXYZ. The point cloud is published in the base_ortho frame of reference.

You can run the laser_ortho_projector on a pre-recorded bag file that comes with the package. First, make sure you have the scan_tools stack downloaded and installed by following the instructions here.

Next, make sure you have the necessary tools installed:

You should see the input laser scan and the orthogonally projected scan displayed in rviz, similar to the video below:

The laser_ortho_projector_node takes in sensor_msgs/LaserScan messages and outputs their orthogonal projections in the xy-plane.

We appreciate the time and effort spent submitting bug reports and feature requests.

Please submit your tickets through github (requires github account) or by emailing the maintainers.