Description: This tutorial shows a user how to start the test viewer, which graphically displays the status of running burn-in tests. The viewer displays output from the Test Manager program.

You must install ROS before using the status viewer.

After installing ROS, build the viewer:

Periodically, you may have to update your ROS packages. After you update with svn, rebuild as shown above.

In order to use the viewer, you'll have to set your ROS master to point the computer that is running the Test Manager. For the Beta lab, it's "cmi". Open a terminal, and type:

Now, open the viewer. In the same terminal: 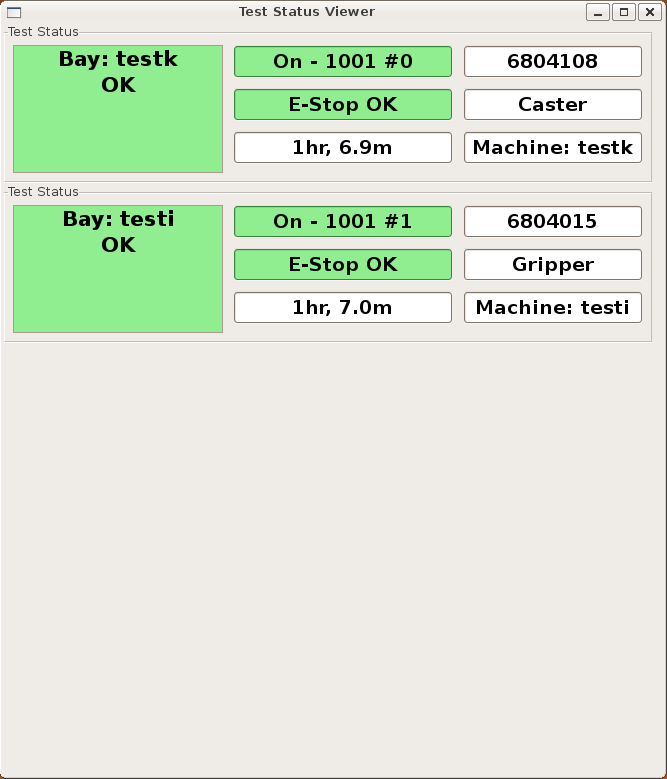 The viewer will display the status of all tests that are running, along with their power state, bay, test machine and serial number. After a test is shut down, the viewer will show it as closed.

If you think you'll be using the viewer often, you may want to set up a shortcut to open the viewer and set your ROS Master.

Add these lines to your .bashrc file

Open a new terminal. When you type:

It will set your ROS master to cmi (the test machine), and the viewer will come up.

If you try to open the viewer and see:

you have not correctly set your ROS master, or the Test Manager isn't running. Press Ctrl-C, then close the window.

Check that your ROS master is set correctly:

If it is set correctly, the Test Manager probably isn't running.