This package is a ROS wrapper that set up the communication and control of the ZLP1 Z-LASER Projector, making it fully compatible with all available sensors and devices running over the ROS-Industrial project. For that purpose, it provides a ROS API that expose the different functionalities offered by the device.

This package is a ROS wrapper that set up the communication and control of the ZLP1 Z-LASER Projector, making it fully compatible with all available sensors and devices running over the ROS-Industrial project. For that purpose, it provides a ROS API that expose the different functionalities offered by the device.

The ZLP software has a modular architecture. These modules communicate via TCP/IP and have to be located within the same network.

Z-Laser offers different solutions depending on where you prefer to have zService running. This package has been developed in a device with zService built-in to the projector itself.

Projector is expected to be reachable under 192.168.10.10 (factory default configuration).

The laser projector ZLP1 covers working fields from 1.0m x 1.0m up to 3.5m x 3.5m; and working distances from 1.0m to 3.0m. It is able to project figures in a specific position at various workpiece distances. It also has the ability to move and rotate the displayed object. To do this, you need to specify a reference coordinate system first. In order to embrace this issue, the definition and setting up of reference coordinate systems will be further explained in this section.

There are two ways to specify a coordinate system: either by setting the coordinates manually, or by automatic target search. Note that each point on the projection surface can be referenced by two different coordinate systems:

Note that a coordinate system needs 4 points to be fully defined.

An example of manual system definition is going to be developed in order to guide this section. First, the user must decide the coordinate system’s resolution to set a position. See the differences in the scheme below. This value is non-dimensional, i.e., do not represent real world dimensions.

For the following example, we use a resolution of 1000. Then, the user should indicate the position of the four points that define the coordinate system in real world values (millimetres). This means to specify the desired correspondent points in Projector Reference System {P}. For example:

Please, be careful to indicate dimensions that correspond to either a square or a rectangle.

Finally, the user is required to introduce the value for T0 that will form the User Reference System {T}. Then, the following points will be auto-defined based on the resolution value. In case the above values represent a square as in the example, resolution is applied directly:

However, if it is a rectangle, resolution is applied to axis with the longest dimension and autoscaled for the other. When creating a coordinate system, those values are returned for the user to know.

This is a scheme of the example: 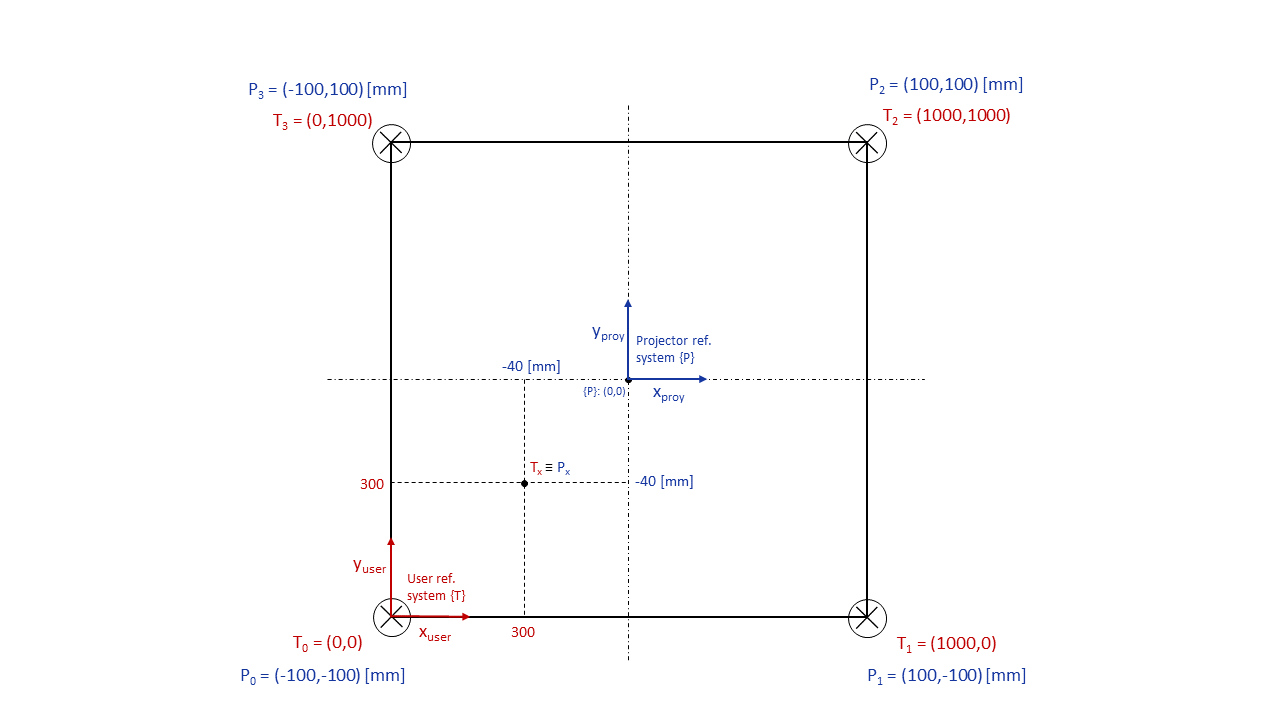 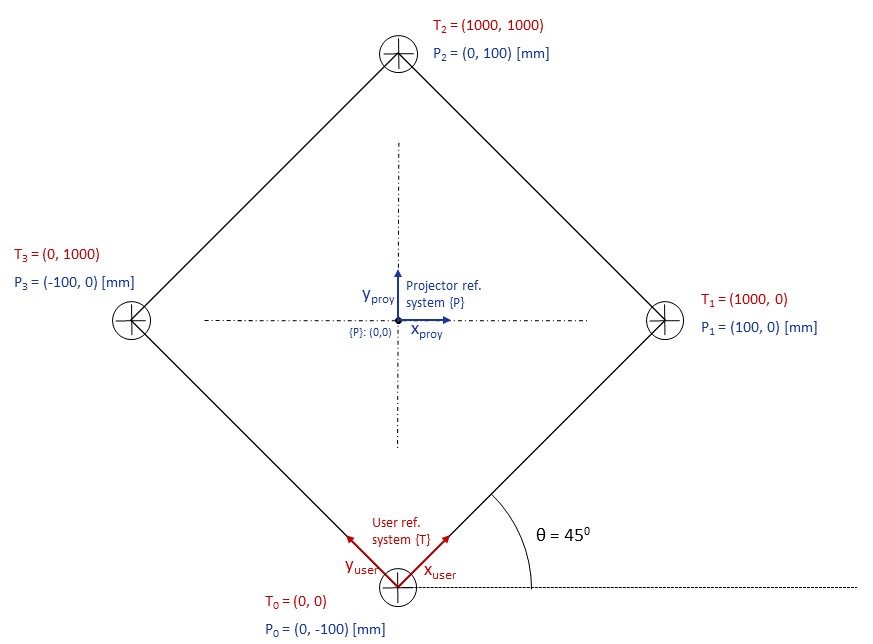 Finally, notice that real world coordinates specified in Projector Reference System {P} depends on the projection distance (distance between the laser projector and the projection surface), as it is a beam.

In this example, the real distance between projector and surface is ‘d’. If it is incorrectly indicated as a greater distance ‘D’, the projected points would be located more distant (‘W’) to the coordinate system origin than the user has specified (‘w’).

For that reason, the installation projection distance must be correctly indicated, and it can be calculated using the following formula: d = f * 0.5 / (tan(α/2)) where

Given a length of the desired projection area of 2000mm and an opening angle of 56o, it results in an installation distance of 1880.7mm:

The procedure is similar to the manual definition but in this case, the user indicates the approximate position of the targets that correspond to the P0, P1, P2 and P3 points. After that, the projector device scans these approximate positions and redefines the reference system with the exact ones.

The zlp_projector_zlp1 provides a collection of topics, services and parameters in order to operate the projector device from ROS environment, as connecting, disconnecting, defining coordinate systems, starting and stopping projection, etc.