The dirt detection software is intended to run on human-sized service robots with the ability to localize themselves in the environment. The current implementation has been recorded and tested on a Care-O-bot 3 platform which uses the RGB-D sensor Microsoft Kinect to capture the necessary point cloud and image data for dirt detection. These simple requirements allow for an easy application of the dirt detection algorithm on a different robot.

The usage of the dirt detection system is quite simple. If you are working with a Care-O-bot 3, start the robot, launch the bringup scripts and the localization, e.g. with

and launch the dirt detection software with

If you want to detect dirt on a bag-file data stream, start the dirt detection software and then play the bag-file.

The dirt detection software expects to receive the topics /tf (transformation tree) and /cam3d/rgb/points (the colored point cloud from the RGB-D sensor). If you are using a different robot make sure that the topics are remapped accordingly in the launch-file. As long as you provide a proper transformation from the /map frame to the camera frame the dirt detection software should work with any robot.

The algorithm publishes the topic /dirt_detection/detection_map which displays the detected dirt as dark cells in a grid map. You can use RViz to visualize the resulting dirt map.

There are further launch files provided with the autopnp_dirt_detection package for different purposes:

The parameters, topics, services and actions provided or needed by the dirt detection system are described here.

In order to conduct a proper evaluation of the dirt detection algorithm, a novel dirt database has been recorded and labeled with ground truth. The dataset provides 65 different kinds of dirt recorded at 5 floor materials. This section introduces the dirt dataset by explaining the recording conditions and the contents.

The whole database has been recorded with the service robot Care-O-bot 3 under realistic conditions. The Care-O-bot 3 platform is equipped with a mobile base, an arm for manipulation and a sensor head for perception as depicted in Figure 1(a). The integrated laser scanners are utilized to localize the robot within the environment during the recordings. This allows the detection software to relate dirt detections to real locations at the floor and furthermore enables the software to integrate detections in a map. In order to increase the reusability of the dirt detection algorithm the data was recorded with the general purpose RGB-D camera Microsoft Kinect mounted inside the robot’s head. For the recordings, the flexible torso of Care-O-bot was bowed to the front to maximize the visible ground area close to the robot. This way the recorded data can be retained with the highest possible resolution and the robot is more likely being able to record every part of the ground surface. The camera is mounted at a height of 1.26 m above the ground and is tilted downwards by 30°.

For capturing the dirt database various kinds of dirt have been distributed at the floor with a minimum distance of ca. 20 cm between the samples. Then the robot was manually driven through the room imitating the behavior of exploring the scene. This means that the robot was usually driven forwards into the dirty area and then backwards in conjunction with several turns. The data stream of the sensors has been recorded into ROS bag-files that contain

Given this selection of data, dirt recognition algorithms are enabled to segment the ground plane, to choose between the lower or higher color image resolution for dirt recognition, and to transform the respective coordinates between the camera and the fixed world coordinate systems. The next section details which kind of data has been recorded under the described conditions. 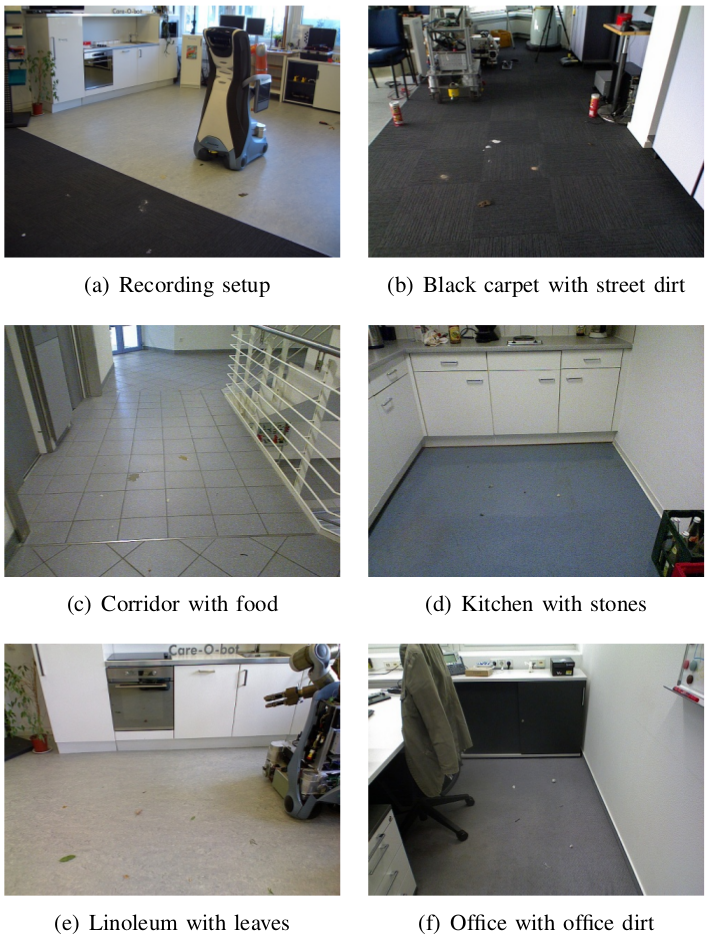 The dirt database contains 5 different floor materials that were recorded with 9 groups of dirt and under clean conditions each, resulting in a total of 50 bag-files. The ground surfaces are depicted in Figure 1 and the 9 groups of dirt can be found in Figure 2. Each of these groups contains 6 to 10 different items totaling in 65 distinct kinds of dirt for the whole database. The captured sequences have a length of 12 s to 55 s and contain between 100 and 300 frames of point cloud and image data. The file sizes range between 1.18 GB and 4.86 GB. Every data sequence is accompanied by a ground truth file that labels the position and extent of the present dirt by means of a rotated rectangle as well as the type of dirt. The coordinates of the ground truth labels are provided in the fixed world frame which is possible because of the localization of the mobile robot. This proceeding has the advantage that each piece of dirt has to be labeled only once per bag-file and not for every frame. 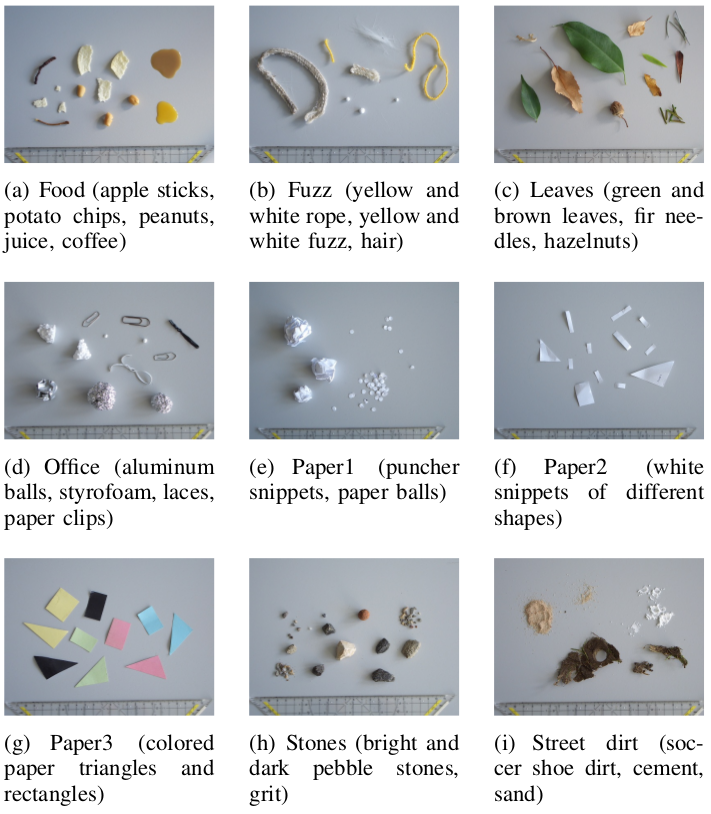 The dirt database is available for download at http://153.97.5.95/data/dirt_dataset/. Because of their size the 50 bag-files need to be downloaded individually. The labels and file listing of bag-files to test are provided for all bag-files in the archive dirt-dataset-annotation.zip. Please cite our ICRA paper when using our datase (see References).

Furthermore, we provide another sequence named apartment-show.bag which contains the transition between two types of floors. This file is not annotated.

You can either play those bag-files and watch the results with the dirt detection system by following the directions provided in Section Dirt Detection Software or you can run a database test, which is explained in Section Database Testing.

Recording and Labeling Your Own Bag-Files

The /map topic does not need to be recorded if you do not aspire to display the results in the original map.

After recording the bag-file, start the dirt detection software with

and then play the recorded bag-file with

You can also use the -r <number> option to play the bag-file at a different speed. After a few seconds, the dirt detection software will open two images showing the normal view onto the scene as well as the warped image. Click into one of the images to move the focus to it and press 'l' whenever you like to label a view. Now a third image with the title 'labeling image' pops up. Press the 'h' button to list all keys that you can use for labeling your data. By pressing the left mouse button if the upper left corner of the dirt item and releasing it in the lower right corner you can draw a label box. This box can then be changed in size and rotated. When you arranged if in the desired position press the 'enter' key and type a descriptive label of your choice. You may use the 'space' key for multiple words. Finish the typing by pressing 'enter' again. Please notice that you only have to label each particle once per bag-file as the labels are converted to fixed world coordinates of the /map frame because the dirt is mapped. After labeling all items, press the 'esc' key. Now, you will see the playback stream of the bag-file again. Whenever you like to label more items within the stream, press 'l' again and label. Should you receive warnings from tf continuously during the repetitions of the playback, restart the rosbag play command. After all data of the bag-file has been labeled, press the 'f' key while the image stream is displayed and the labeling data will be written into autopnp_dirt_detection/common/files/train.xml. Rename the file to the same name as the your bag-file (but keep ending .xml) and place it in the same folder as the bag-file. Please restart the dirt_detection software after labeling a bag-file to avoid storing the information of a previous bag-file again in the next. You can now use the labeled bag-files for your own database test by putting the name without ending into the database index file dirt_database.txt. Do not forget to increment the number of files in the second row of the file. To use the mapping part, please open rviz while your bag-file is playing and display the colored point cloud. Estimate the x- and y-coordinates of the center of your recordings approximately with the grid of rviz and put those numbers separated by a whitespace after the file name. A valid entry in dirt_database.txt looks like

This section explains how to use the testing framework to reproduce the results obtained with the dirt detection algorithm developed in the AutoPnP project and how to test your own algorithm.

The autopnp_dirt_detection package contains three launch files that reproduce the results stated in [1].

There is an index file for database tests which tells the algorithm which bag-files are included in the test. This file does already exist for the provided dirt database (for your own bag-files see Recording and Labeling Your Own Bag-Files). Before launching any of the three prepared database tests please go to the respective folder autopnp_dirt_detection/common/files/results/<experiment_name> and open the index file dirt_database.txt. You need to put the appropriate path to your storage location of the bag-files from the dirt dataset in the first line.

Then start the database test with

Depending on the speed of your hard disc and processor your computer will now compute for some hours or up to a day. The results will be written into autopnp_dirt_detection/common/files/results/<experiment_name>.

After all bag-files have been processed you can generate recall-precision plots by opening common/matlab/dirtDetectionStatistics.m in Matlab. Before executing the script, enter the correct path to your results in the parameter section. The script allows you to adjust some parameters that are directly described in the code.

Database Testing with Your Own Dirt Detection Algorithm

It is easy to adapt the dirt detection software to use your own dirt detection algorithm. To do so have a look at the function void DirtDetection::planeDetectionCallback(const sensor_msgs::PointCloud2ConstPtr& point_cloud2_rgb_msg) in file ros/src/dirt_detection.cpp. This is the current callback function that initiates the dirt detection procedure. You can define a similar function and register it as callback. If you need to use different input data to the function please also adapt the publishers in function void DirtDetection::databaseTest().

Please make sure that your dirt detection callback function

Please consult ros answers to see if your problem is already known.

Please cite our ICRA paper when using our dataset or software.