This paper describes an object segmentation approach for autonomous (humanoid) service robots acting in human living environments. The proposed system allows a robot to effectively segment textureless objects in cluttered scenes by leveraging its manipulation capabilities. In this approach, the cluttered scenes are first statically segmented using part-graphbased hashing and then the interactive perception is deployed in order to resolve possibly ambiguous static segmentation. In the second step the RGBD (RGB + Depth) features, estimated on the RGBD point cloud from the Kinect sensor, are extracted and tracked while motion is induced into a scene. The resulting tracked feature trajectories are then assigned to their corresponding object by using a graph-based clustering algorithm, in which the graph edges can be used to measure the distance dissimilarity between the tracked RGBD features. In the final step, dense model reconstruction based on region growing algorithm is applied. We evaluated the approach on a set of scenes which consist of various textureless flat (e.g. box-like) and round (e.g. cylinder-like) objects and the combination thereof. 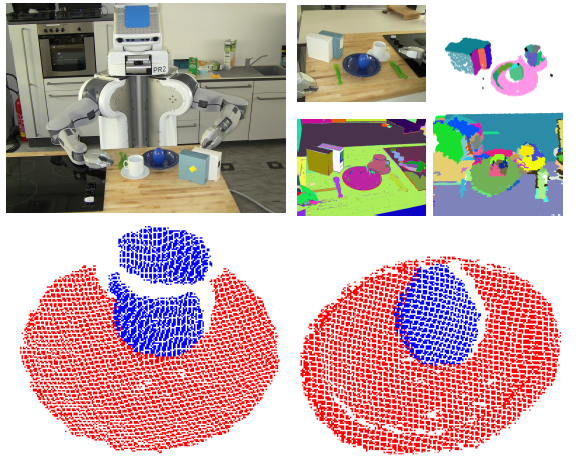 Tutorials are still work in progress.