Note that as of laser_pipeline-0.4.0 this API is deprecated. Please refer to the laser_assembler page for the latest API

The general data flow can be descibed as follows: 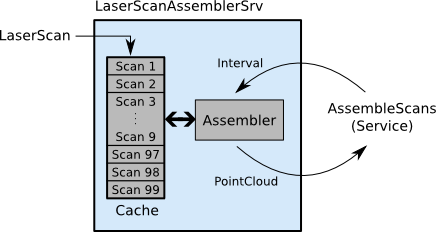 The LaserScanAssemblerSrv simply listens to the appropriate topic and accumulates messages in a ring buffer of a specific size. When the AssembleScans service is called, the scans in the requested interval are assembled into a single cloud and returned.

Interfacing with a Snapshotter

There are several robot systems (including the PR2) that have an articulated laser sensor. In these systems, it's often useful to get a "snapshot of the world". This can be done by writing a snapshotter.

The general data flow can be described as follows: 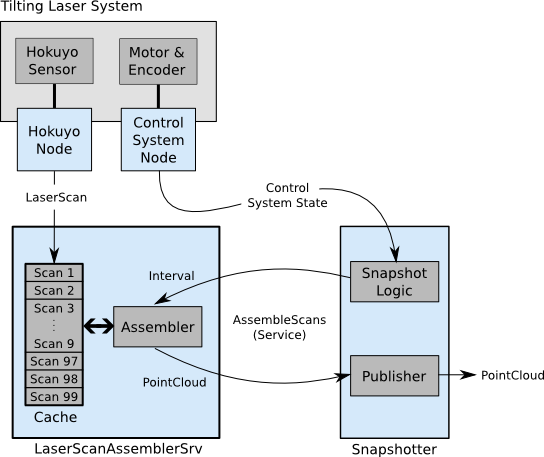 A snapshotter listens to the state of the mechanism, and then computes the interval on which to assemble scans. This interval is requested from LaserScanAssemblerSrv, and then published on a topic.

In the case of the pr2_laser_snapshotter, it listens to special messages from the control system that indicate when the tilting mechanism has reached the very top or bottom of its sweep.