Description: This tutorial shows step-by-step how to setup up the Arduino IDE to use rosserial.

The Arduino and Arduino IDE are great tools for quickly and easily programming hardware. Using the rosserial_arduino package, you can use ROS directly with the Arduino IDE. rosserial provides a ROS communication protocol that works over your Arduino's UART. It allows your Arduino to be a full fledged ROS node which can directly publish and subscribe to ROS messages, publish TF transforms, and get the ROS system time.

NOTE: If you do not already have an Arduino IDE installed, download it from the Arduino website. It is best to install the application into a folder on the application PATH, the desktop, or home folder. Once installed, launch the application to select your sketchbook location. (See arduino official website, sketchbook is a standard place to store your programs, or sketches). Close the IDE when done.

In order to use the rosserial libraries in your own code, you must first put

prior to including any other header files, e.g.

otherwise the Arduino IDE will not be able to locate them.

Installing on the ROS workstation

You have 2 options of how to install related libraries.

You can install rosserial for Arduino by running:

Installing from Source onto the ROS workstation

Source build instructions are different for groovy+ (catkin) than for earlier (rosbuild) releases. Select the build system based on your release to see appropriate instructions.

Rosserial has been catkin-ized since the groovy release, and the workflow is a bit different from fuerte and earlier releases. Rather than running the library generator over each package you want to use, you run it once and generate libraries for all installed messages. In the instructions below, <ws> represents your catkin workspace.

These commands clone rosserial from the github repository, generate the rosserial_msgs needed for communication, and make the library files in the <ws>/devel/lib directory.

Note: currently you HAVE to run catkin_make install, otherwise portions of the ros_lib directory will be missing. This will hopefully be fixed soon.

These commands clone rosserial from the kforge repository using mercurial, generate the rosserial_msgs needed for communication, and make the ros_lib library.

Install ros_lib into the Arduino Environment

The preceding installation steps created the necessary libraries, now the following will create the ros_lib folder that the Arduino build environment needs to enable Arduino programs to interact with ROS.

In the steps below, <sketchbook> is the directory where the Linux Arduino environment saves your sketches. Typically this is a directory called sketchbook or Arduino in your home directory. e.g cd ~/Arduino/libraries

Alternately, you can install into a Windows Arduino environment.

Ros_lib installation instructions are different for groovy source (catkin) than for earlier (rosbuild) or binary releases. Be sure you've selected the correct build system above to see appropriate instructions - catkin for a groovy source build, rosbuild otherwise.

Note: you have to delete libraries/ros_lib, if present, in order to regenerate as its existence causes an error. "rosrun rosserial_arduino make_libraries.py" creates the ros_lib directory.

If you are building the Arduino on Windows, you need to create the ros_lib folder in some convenient directory.

Now that you've installed either from source or debs, all you have to do is copy the rosserial_arduino/libraries directory into your Arduino sketchbook:

If you are building Arduino on Windows, copy the ros_lib directory from Linux to the Windows sytem's sketchbook/libraries folder (typically found in My Documents).

*Note: Currently you can install the Arduino libaries directly in the Arduino IDE. Just open the Library Manager from the IDE menu in Sketch -> Include Library -> Manage Library. Then search for "rosserial". This is useful if you need to work on an Arduino sketch but don't want to setup a full ROS workstation.

After restarting your IDE, you should see ros_lib listed under examples: 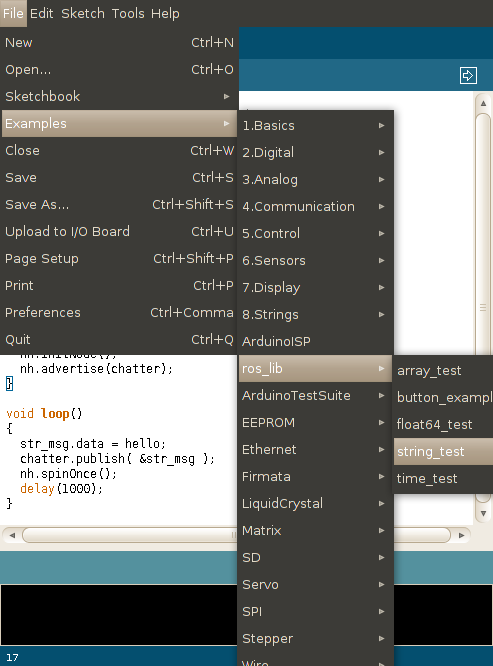 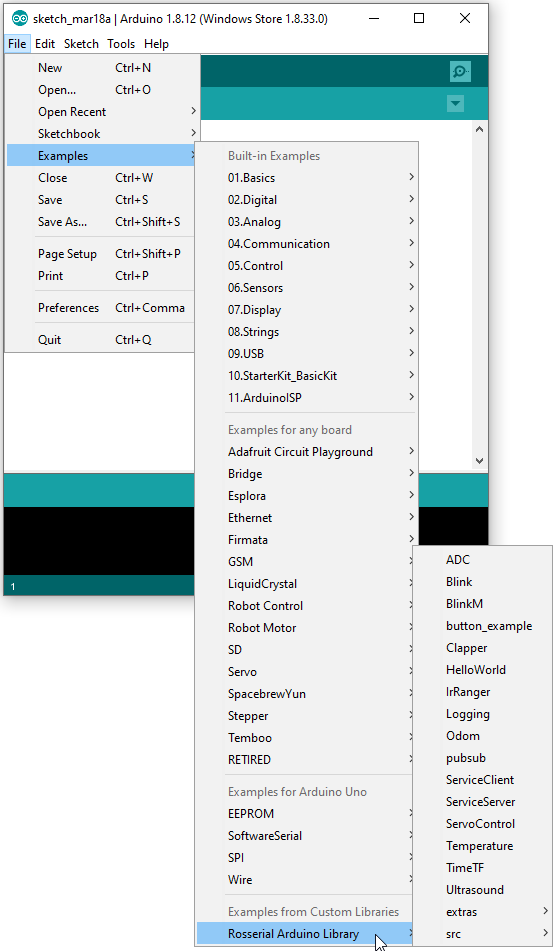