Mapping and Navigation with Turtlebot

Description: This tutorial shows how to use RTAB-Map with Turtlebot for mapping and navigation.

For Turtlebot3 on Melodic/Noetic, see below.

This page will show how to use rtabmap on a Turtlebot. I don't own a Turtlebot, so I've made a launch file from what I can test without the actual robot. The launch file demo_turtlebot_mapping.launch is a one to one replacement of the gmapping_demo.launch of the official SLAM Map Building with TurtleBot tutorial. 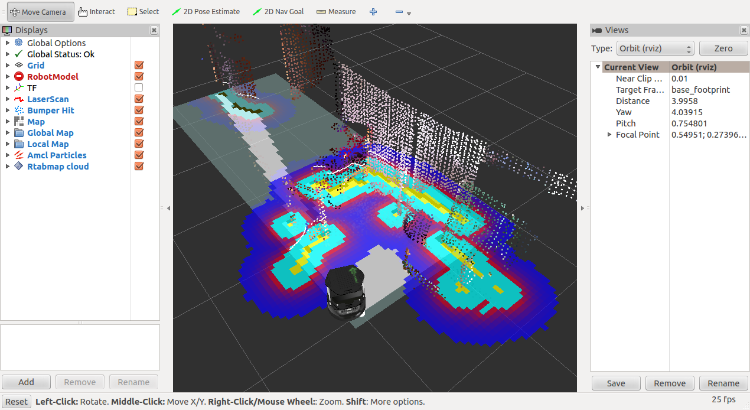 You should see a 2D map and a 3D map. For the navigation stuff, see below. By default, rtabmap re-uses always the same database after each mapping session. To delete the old one and start fresh, delete the database saved here ~/.ros/rtabmap.db or use argument args:="--delete_db_on_start" when launching the demo_turtlebot_mapping.launch:

After a mapping session as above, a database is saved here ~/.ros/rtabmap.db. Now restart the demo_turtlebot_mapping.launch with argument localization:=true:

Move the robot around until it can relocalize in the previous map, then the 2D map would re-appear again when a loop closure is found.

When a map is created (in mapping mode or localization mode), you can then follow the same steps from 2.3.2 of the Autonomous Navigation of a Known Map with TurtleBot tutorial to navigate in the map.

Normally, you only have to "drop" a navigation goal on the map with RVIZ to see the robot moving autonomously to it. Click on "2D Nav Goal" button in RVIZ to set a goal. You should see a planned path (red line) like this to the goal set (green arrow): 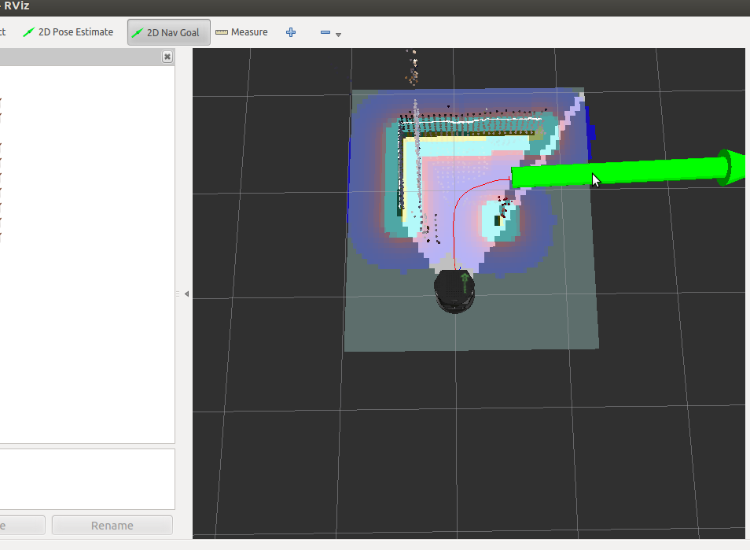 The commands sent by move_base:

If you don't have the robot

If you don't have the robot and you just want to see what it could look like if you have one, you can still generate an odometry like this (with rgbd_odometry:=true):

Note This example has been added on August 2017, make sure you have the demo_turtlebot_mapping.launch with simulation argument depending on the rtabmap_ros version installed.

Turtlebot3 on Melodic and Noetic

Note This example has been added on September 2019, the following file may not be installed with binaries, download it here: demo_turtlebot3_navigation.launch

To avoid TF warning about leading '/' in frame name (map, odom, base_footprint), remove it in those files: