Next Tutorial: Performing SBA on Data from a File

Sparse Bundle Adjustment, or SBA, is used for reconstructing 3D structure and camera pose from a series of monocular or stereo images. The technique is usually used for refining existing estimates of 3D geometry and camera pose.

SBA is used for many applications, including improving estimates from visual odometry for use in visual SLAM, reconstructing object geometry, localizing tourist photos, and many more. In most application involving uncertain camera pose and uncertain point positions, SBA would improve the position estimates by minimizing a particular cost function.

A point or world point is the representation of a keypoint in world coordinates, expressed as a homogenous coordinate x, y, z.

A node contains information about camera pose and camera parameters. A camera pose is expressed in terms of 6 variables: translation in x, y, z and rotation expressed in unit quaternions in one hemisphere (with a w > 0).

The projection of a point or world point is the location it would be in an image given a camera pose.

A projection is used to calculate the reprojection error, or the difference between the location of a keypoint in an image and its reprojection into the image plane after computing a world coordinate and camera pose for the point.

A track is an ordered collection of the projections of a particular world point into images from different camera poses. 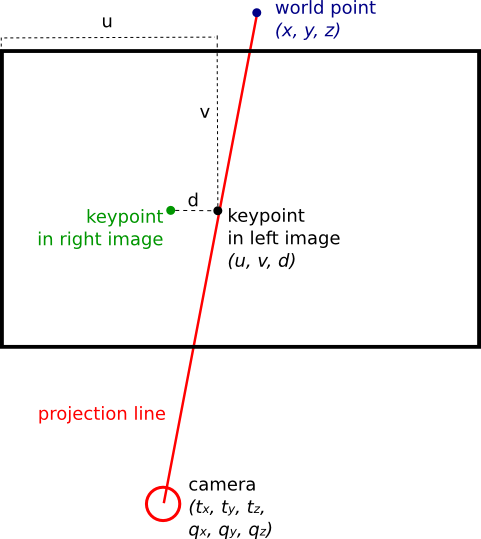 What do you need to run SBA?

Notice that SBA requires an estimate of the camera pose and point positions to be already computed and refines these estimates to better fit all data. The method that is appropriate to generate these data varies by application, but for uses such as visual SLAM, visual odometry is the preferred method.

Now that you know the basics, continue on to the Performing SBA on data from a file tutorial.