Calibrating a Kinect to the TurtleBot Arm for Manipulation

Description: This tutorial will describe how to calibrate the physical position of the kinect to the TurtleBot arm, when the kinect is positioned either on-board the TurtleBot or off-board.

What is calibration and why?

In this case, calibration refers to extrinsic calibration, or calibrating the physical position of a camera to some reference frame. If you have the camera in the factory position of the TurtleBot, it's already extrinsically calibrated - that is, its position on the robot is correct. However, that camera can not see the workspace of the arm. So in order to be able to perceive what the arm is doing, there's a few options: add a second kinect overlooking the workspace, or move the kinect on the robot.

If you add a new kinect or move an existing one, you now have the problem of not knowing the precise location of the camera in 3D space. This tutorial will walk you through determining the position of the kinect relative to some fixed frame by using the arm.

Having a kinect on-board the TurtleBot (that is, physically mounted on the TurtleBot) has the advantage of letting the robot move its base while performing some manipulation task. However, since the kinect will have to be moved from the position that allows the TurtleBot to navigate, you will either have to add another sensor for navigation or adapt the data coming from the kinect in some way to still allow obstacle avoidance.

Having a kinect off-board allows you to keep your current robot setup, and gives a guaranteed good view of the workspace. However, since the kinect is off-board, it only allows you to use one workspace at a time.

This extrinsic calibration procedure works by using a calibration pattern. The kinect can localize the calibration very precisely, and by moving the arm to certain positions on the pattern, we can calculate the transform between the kinect and any frame on the robot.

The physical setup for calibration involves having a camera (in this case, kinect) that can see the workspace, and a workspace that the arm can reach. The IKEA Lack side table is actually the perfect height for the TurtleBot arm, though anything of around the same height should do.

Next, print out this check_7x6_27mm.pdf calibration pattern on A4 paper and attach it to the workspace, making sure that the arm can reach every point on the pattern. 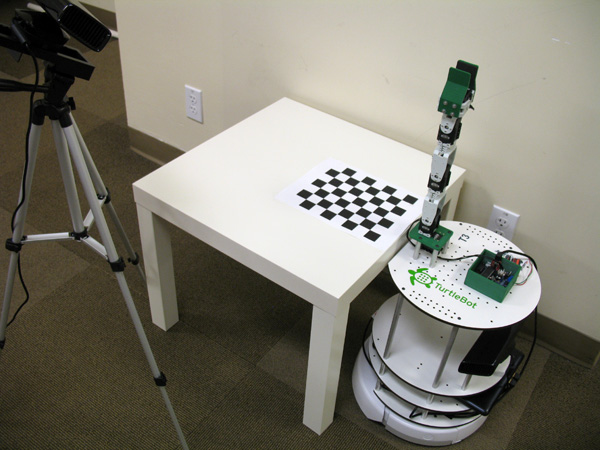 First, if they're not already running, start up the kinect and arm drivers on the TurtleBot.

Next, make sure that the kinect is set up in such a way that it can see the entire calibration pattern. The image below is a good example of such a setup. 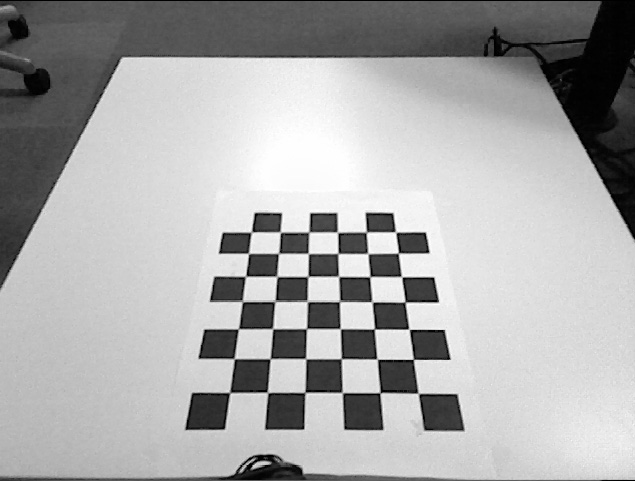 On your PC, make the package and launch the correct launchfile for your application. If you are calibrating an off-board kinect, launch calibrate_old_kinect.launch instead.

This should detect the checkerboard and pop up the image shown below, with the calibration pattern edges overlaid and four points marked on the image. 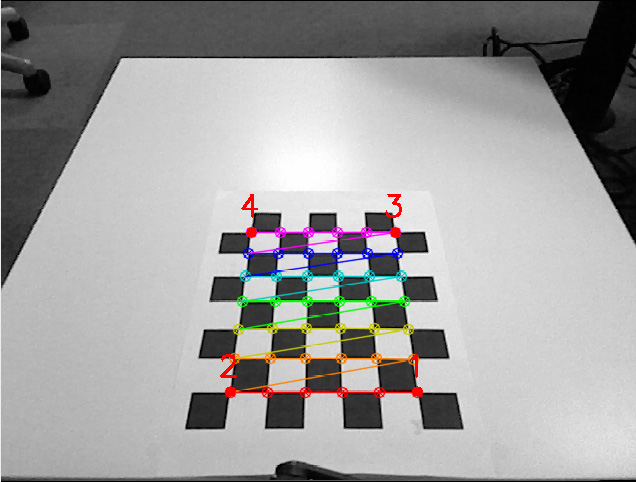 The next step is to move the edge of the gripper to the four specified points in order. Note that there is one specific edge you are trying to move: if you orient the arm so that the un-actuated side of the gripper is on the left, it will be the bottom left point. Make sure that your setup matches the one pictured below. 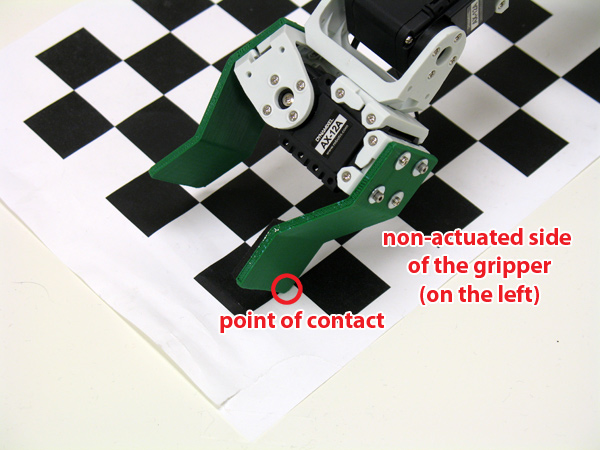 Next, move the point of contact to the four points indicated on the image, pressing Enter every time you have the correct position. 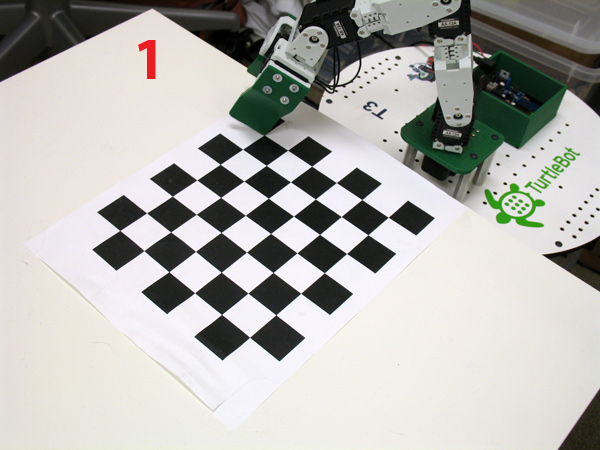 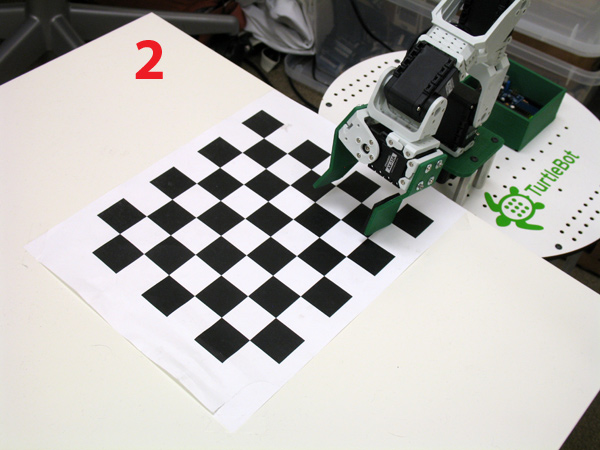 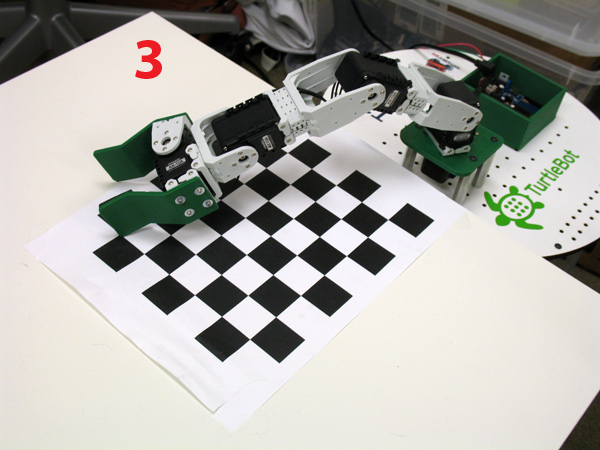 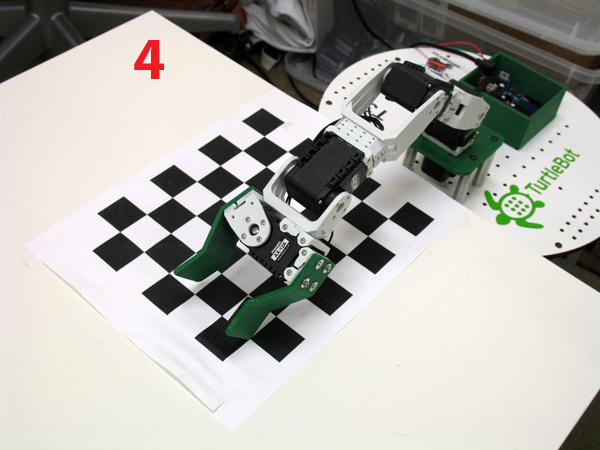 After moving to the fourth point, the calibration script will output something like the following:

If you're calibrating a kinect on the TurtleBot, you need to update the calibration URDF for the robot to reflect the new position of the camera.

On the TurtleBot, roscd turtlebot_description and open urdf/turtlebot_calibration.xacro. Replace the contents with URDF output of the calibration script. You will need to restart the turtlebot node for the change to take effect.

If you're calibrating an external kinect, open up a new terminal window, and run the static transform output by the script, such as

As long as this command runs, the static_transform_publisher will publish the transform between a frame on the TurtleBot and the kinect frame. If you move the physical camera, you will need to recalibrate again.

Whichever option you chose to take, the kinect pointcloud (usually /camera/rgb/points) should line up with the actual position of the arm in rviz, as shown in the image below. 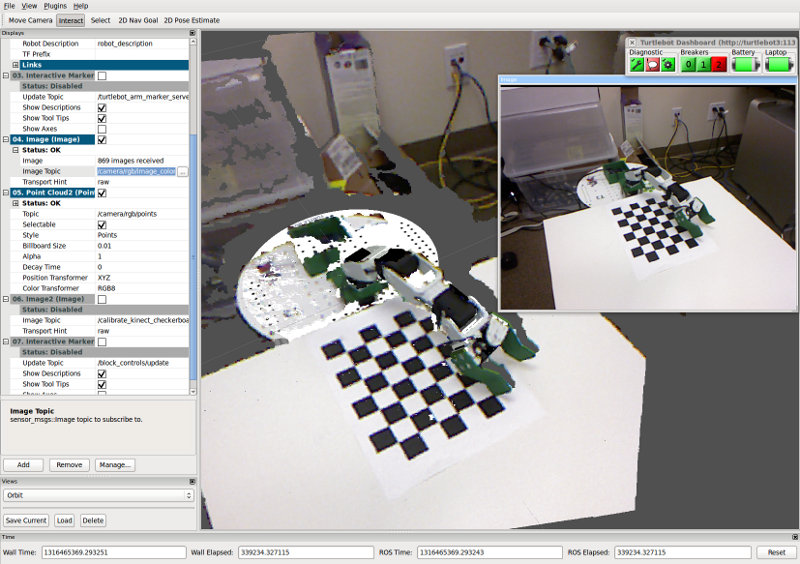