There are two main components of object perception:

Our manipulation pipeline always requires segmentation. If recognition is performed and is successful, this further informs the grasp point selection mechanism. If not, we can still grasp the unknown object based only on perceived data.

Note that it is possible to avoid segmentation as well and select grasp points without knowing object boundaries. The current pipeline does not have this functionality, but it might gain it in the future.

To perform these tasks we rely the following assumptions:

The sensor data that we use consists of a point cloud from the narrow stereo or Kinect cameras. We perform the following steps:

The output from this components consists of the location of the table, the identified point clusters, and the corresponding database object id and fitting pose for those clusters found to be similar to database objects. 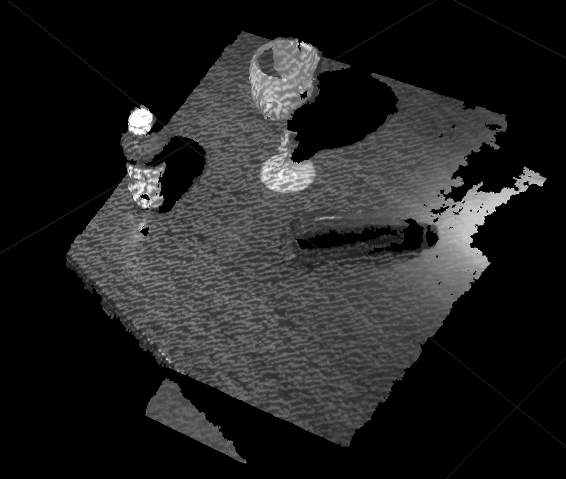 Narrow Stereo image of a table and three objects 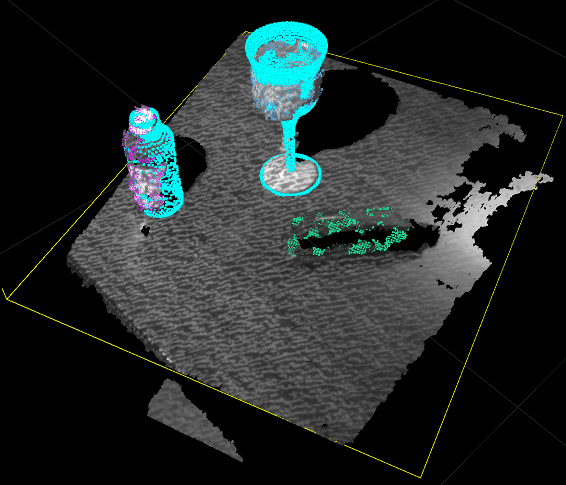 All of these parameters are applied to decide what part of the point cloud the detector should focus on. They must make sense in the processing_frame. If processing_frame is unspecified, all processing takes place in the native frame of the incoming cloud, which on the PR2 robot is the camera frame. Therefore, all these parameters have default values which makes sense in the camera frame.

Most often, segmentation and recognition are used together. To simplify this process, the tabletop_complete node will pipe them together, passing the results of segmentation directly to recognition so you don't have to worry about that. It implements the TabletopDetection service.

To launch the manipulation pipeline, complete with the sensor processing provided here, and execute pickup and place tasks using the PR2 robot, tutorials and launch files are provided in pr2_tabletop_manipulation_apps.