Humans require the sense of touch to identify objects based on their tactile properties and to dexterously interact with them. Until recently, humanoid robots have needed to rely on machine vision as a substitute for this important sensory function. The BioTac (SynTouch LLC) is a unique tactile sensor capable of acquiring sensory modalities that mimic the full range of capabilities in the human fingertip. It consists of a rigid core that houses all of the sensory electronics and an elastomeric skin made of low-cost silicone, making the design uniquely robust and easy to repair if the skin becomes worn or damaged. The space between the skin and core is inflated with a liquid giving the sensor a compliance very similar to the human fingertip. 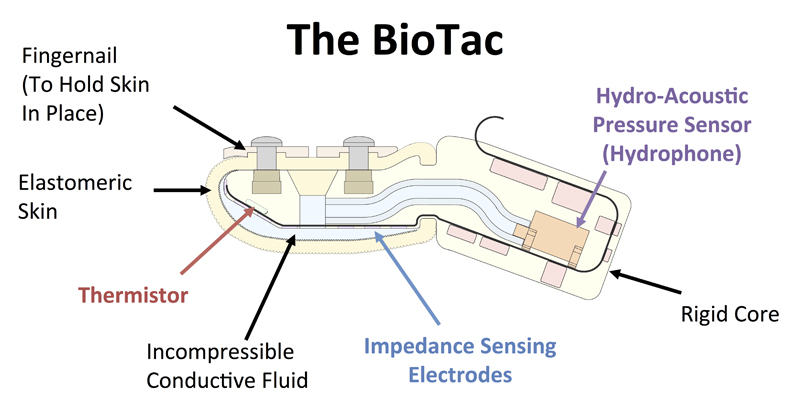 The sensory modalities of the BioTac were modeled after the tactile function of the human fingertip to robustly sense:

See the two videos below for a demonstration of the BioTac's capabilities:

Note: Detailed descriptions of the BioTac sensory modalities and function are covered in its Product Manual.

All sensory modalities of the BioTac are sampled and digitized at 12 bits by a microprocessor inside the sensor. Communication between the BioTac and other devices is done using SPI protocol as explained in more detail in the Product Manual. Through use of chip selects, multiple BioTacs can share the same sampling sequence and timing. In most applications, the SPI host sends a command to sample a particular channel to all BioTacs and then reads their responses back individually. The following channels of information are available from the sensor:

Details of configuring the BioTacs and data acquisition hardware are covered in the descriptions of the SynTouch stack and the st_biotac package.

Many biomimetic features of the sensor such as the inclusion of the fingernail, fingerprints and internal heating give rise to the ability to perform a number of biomimetic signal processing functions including:

When combined with actuators a number of dexterous and perceptual applications can be accomplished including:

To support these functions we intend to develop ROS packages to be included in the SynTouch stack.