Description: Learn to use the planning scene warehouse viewer, a GUI application for editing, loading, and saving planning scenes and trajectories.

This will launch the GUI application without launching the mongo database or any planners, trajectory filters, or inverse kinematics solvers. In addition, robot-specific launch files are included for the warehouse viewer which will launch all of its dependencies.

Launching the Viewer for the PR2

Default launch files for the PR2 are distributed in move_arm_warehouse/launch:

If you plan on using real or simulated robot data, then the robot's trajectory action clients and perception nodes must be launched before the warehouse viewer can be used.

Launching the Viewer for Other Robots 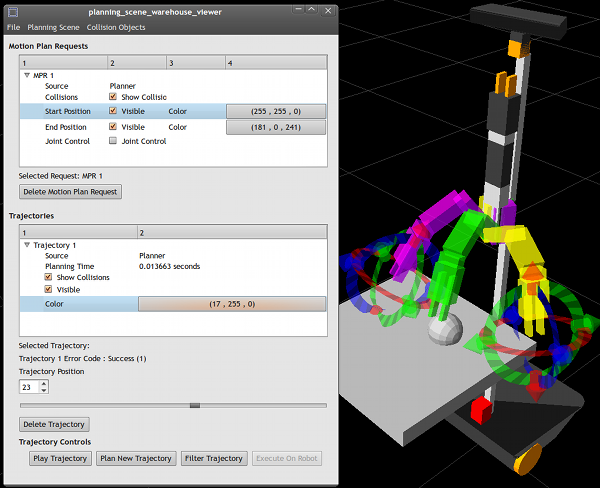 The warehouse viewer supports other robots, provided that they have the following prerequisites:

There are several parameters that must be set before the warehouse viewer can be used. These define the topics that your robot's planners, trajectory filters, and inverse kinematics solvers respond to. As an example, here is the complete list of robot-specific parameters given by the pr2 launch file. Any of these parameters can be ignored by entering "none" as the value of the parameter.

From the Planning Description Configuration Wizard

This will generate a launch file called planning_scene_warehouse_viewer_<your_robot_name>.launch in the launch directory of your <robot>_arm_navigation package. Then type the following:

This will launch the planning scene viewer and all of its dependencies for your robot. 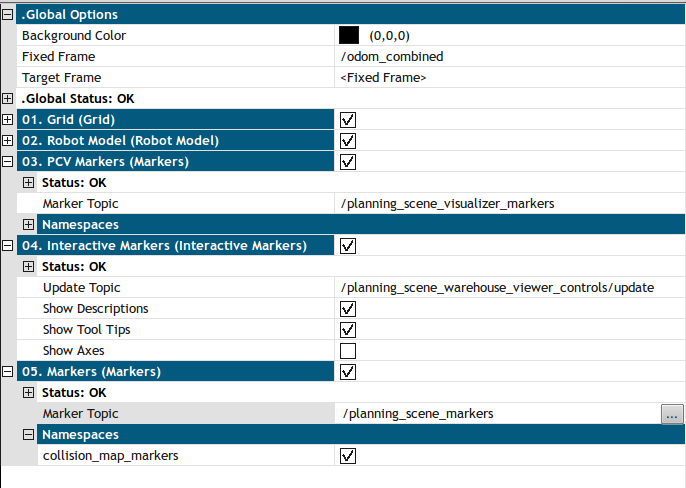 Also, make sure that you have the "Interact" tool selected, and that the base frame of Rviz is correct for your robot. 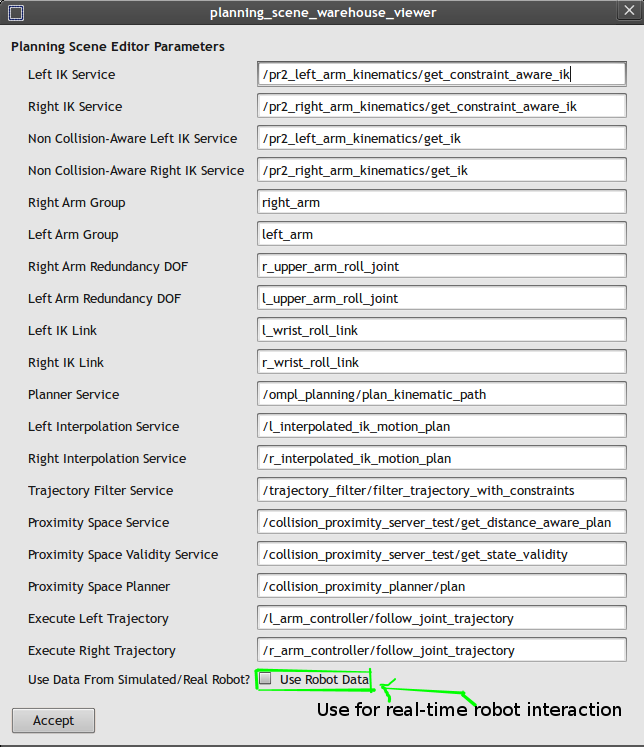 These parameters are passed in as ROS params to the dialog, but they can be verified and edited by the parameter dialog before the viewer runs. Any of these parameters can be ignored by typing "none" into the field listed. In addition, the checkbox labeled "Use Robot Data," when checked, will allow you to send commands to the robot via the Execute Left Trajectory and Execute Right Trajectory parameters, and record the resulting trajectories. Press "Accept" when you are satisfied with the listed parameters.

Warning: Do not check "Use Robot Data" while the Execute Left Trajectory and Execute Right Trajectory services are not being advertised. Make sure they are running by invoking rosservice. Otherwise, the viewer will hang on startup while waiting for these (or any other) services.

Components of the Viewer

After you've accepted the parameter list, the warehouse viewer will subscribe to the requested topics, and the following window will appear: 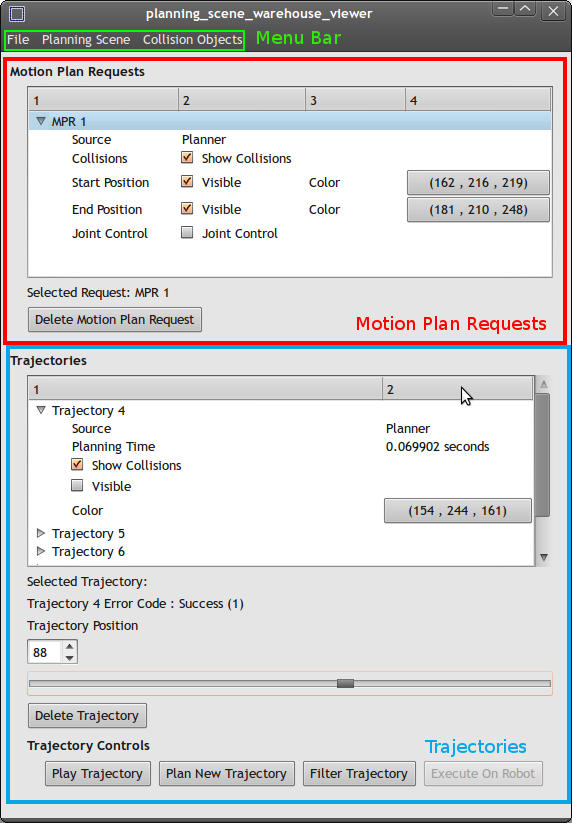 Planning Scenes are the bread and butter of the arm navigation system in ROS. A Planning scene consists of the robot and its current state, the collision objects in the environment, motion plan requests within that planning scene, and trajectories associated with each motion plan request. The planning scene exists to tell planners and collision-aware inverse kinematics solvers what obstacles to avoid, and to provide a method of validating robot states and trajectories to ensure that they are collision-free.

When using the warehouse viewer, you will interact with a single planning scene. You can edit the motion plan requests, trajectories, and collision objects associated with that scene, and then save the scene to a MongoDB database.

You can make a new planning scene at any time by using the menu command:

This will prompt you to save the current planning scene before creating a new, (empty) one.

To view the state of the current planning scene, and to refresh it, open the "Planning Scene" menu on the menu bar.

An Outcome is an error code associated with a particular feature of the planning scene. For instance, each trajectory in the planning scene is associated with a particular error code such as Success, Planning Failed, Collision Constraints Violated, etc. In addition, each Pipeline Stage is associated with an error code. A Pipeline Stage is an arbitrary name defined by the application using the arm navigation stack. For example, the move_arm_simple_action program has several pipeline stages, such as "before ik", "after ik", "planner", "filter", "monitor", and so on.

When you do this, the following modal dialog will appear: 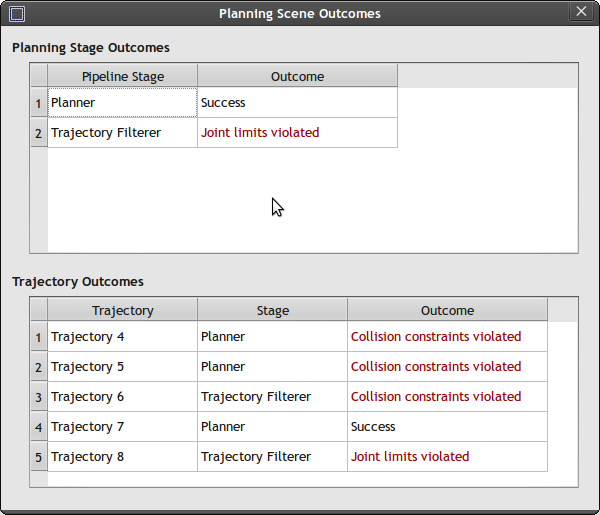 All error codes except for Success are shown in red.

Collision Objects consist of polyhedral obstacles in the planning environment which planners and collision-aware IK solvers must avoid. These can be simple geometric shapes such as boxes, spheres and cylinders, or they can be collision maps (which are collections of voxels) generated by point clouds, or even imported meshes. The planning scene warehouse viewer allows you to create and manipulate simple geometric collision objects.

(Note: currently, collision maps and meshes are not interactive in the warehouse viewer, but they can be loaded from existing planning scenes or imported by other programs)

To create a collision object, go to the menu

Then, the following dialog will appear: 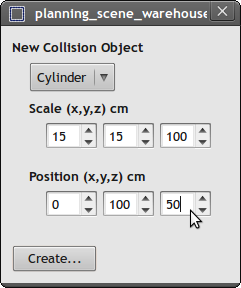 Using this dialog, you can create boxes, cylinders and spheres of various sizes. For boxes, the sizes given in centimeters correspond to the x, y and z lengths of the box's sides. For cylinders, the first scale field corresponds to the radius of the cylinder, the second field is ignored, and the third field is the height of the cylinder. For spheres, the first scale field is the radius of the sphere, and the other two are ignored.

The position fields correspond to an arbitrary point in 3D space in centimeters. These positions can be negative.

Press "Create ..." to place the collision object in the planning scene. It will then appear as an interactive marker in rviz. 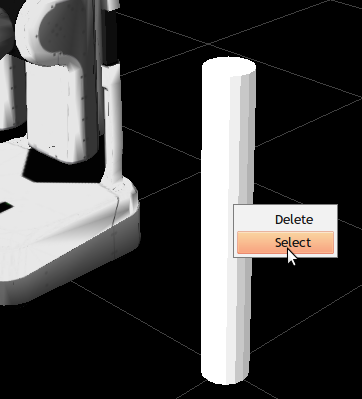 After you have selected it, a set of 6DOF controllers will be created around it. The arrow controls represent motion along a set of axes relative to the object's 6DOF pose, while the rings represent rotation around these axes. Pose the pole as desired, and deselect it by right clicking on it and pressing "Deselect." 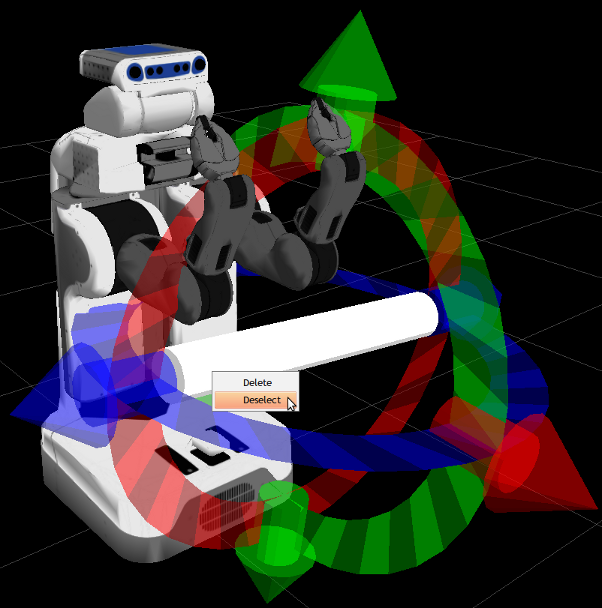 Complex planning scenes can be created in this manner out of simple shapes.

A Motion Plan Request is a ROS message that specifies start constraints and goal constraints. They are used to specify the command "Get from the start state to the goal state without hitting anything in the planning environment" for the robot. A constraint may be a set of joint angles, a 6DOF pose, or other specifications. Arm planners take in motion plan requests as input, and generate trajectories from the start constraints to the goal constraints as output. Inverse kinematics solvers take position constraints on the start and goal of a motion plan request to generate a set of joint angles.

To create a motion plan request, go to the menu

Then, the following window will appear: 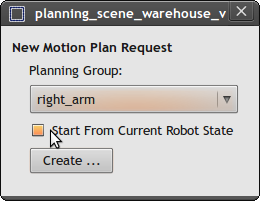 Press "Create ..." to add the motion plan request to the planning scene.

The new motion plan request created was called "MPR 1." There are controls for its start position, end position, collisions, and joint control. You will also see in RVIZ that a new set of markers have appeared for interacting with the motion plan request, labelel "MPR1_start_control" and "MPR1_end_control." 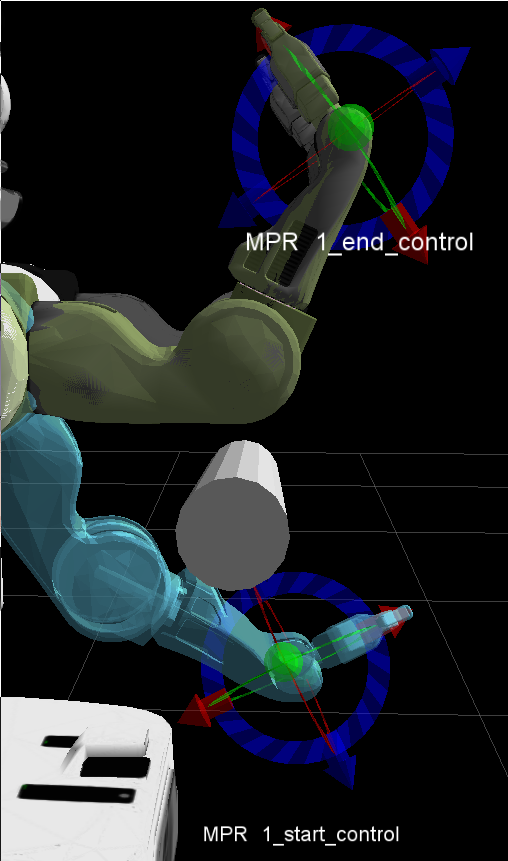 Here, I've moved the start position down below the pole, and the end position is the current state of the robot. You can turn either one of these on or off by toggling the "Visible" check box for the corresponding motion plan request.

Over the start and end positions of the motion plan requests, you should see a 6DOF control. This represents the pose of the end effector of the robot. If you re-pose these using their 6DOF controls, the IK solver will attempt to produce a set of joint angles. The resulting robot state will be displayed as a set of colorful markers in RVIZ. If no IK solution can be found (for instance if the pose is in collision), then the end effector of the arm will appear to be disconnected, and the set of markers will turn to a bright red color: 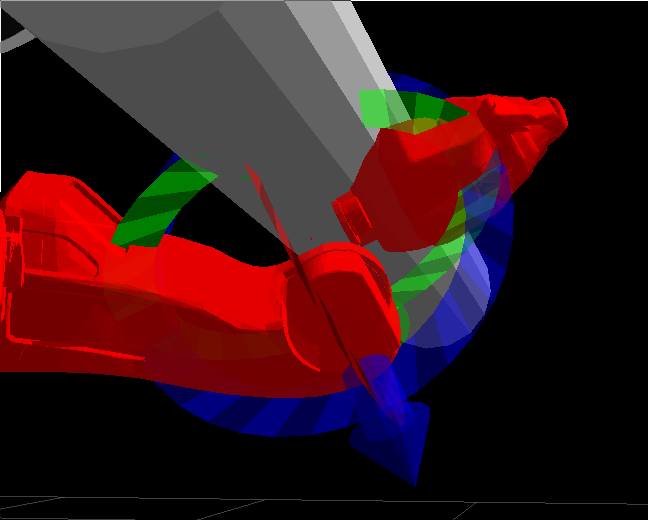 In this state, the motion plan request has no valid joint constraints. If you wind up in a bad state, you can go back to the last good state, or go to a random joint state by right clicking one of the interactive IK controls and invoking a command from its menu: 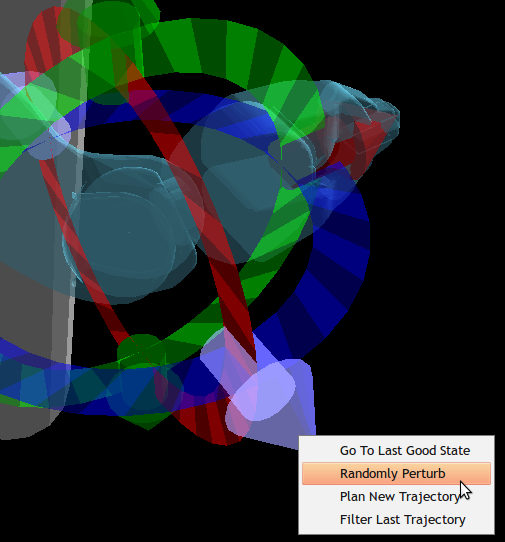 The menu entries are:

In addition to using the IK solver to produce joint angles for the starting and ending positions of motion plan requests, you can also control the joint angles of the start and end positions of the request directly.To enable joint control, check the check box labeled "Joint Control Active" for the selected motion plan request. A new set of controls will appear in rviz: 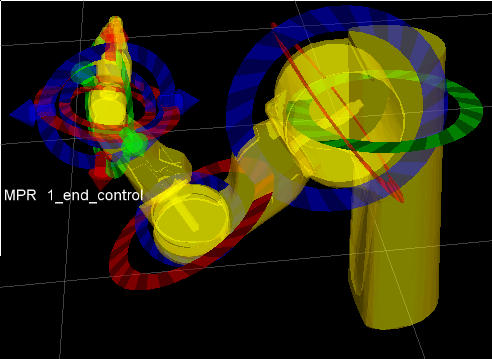 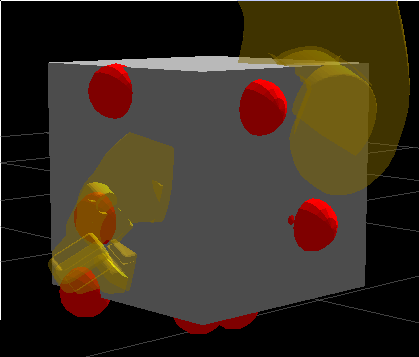 The red spheres can be selected in RVIZ using the "select" tool. This will show which links exactly are colliding.

In addition, the start and end colors of the motion plan requests can be altered. By default, these are given random colors. The button with the 3-tuple corresponds to the red/green/blue values of markers' color. Click the button to produce a color dialog.

A planner's task is to take a motion plan request and produce a trajectory from it. By default, the warehouse viewer is set up to use the Open Motion Planning Library (OMPL) planner, which uses a randomized sampling based method to produce very fast (albeit jerky) results.

Once you are satisfied with the start and goal positions of your motion plan request, you can invoke a planner by either right clicking on the IK control of the motion plan request and pressing "Plan New Trajectory" or by pressing the "Plan New Trajectory" button on the planning scene warehouse viewer itself. After planning a new trajectory, the warehouse viewer will save the resulting trajectory, and it will appear in the trajectory box. If the plan fails, an empty trajectory will be saved to the trajectory box, and a relevant error code will be saved to the trajectory outcomes table.

Many planners rely on a post-processing, or "filtering" stage to smooth the resulting planner trajectory and make it executable by an actual robot. Usually, these randomly interpolate collision-free cubic splines between random pairs of points in the trajectory, resulting in a much smoother, much slower trajectory with many more points. Trajectory filtering usually takes much longer than planning. While the OMPL planner may take a few milliseconds to produce a plan, the Trajectory filter can take up to two seconds to process the resulting planned trajectory.

When interacting with a real or simulated robot, you may also execute any trajectory on the robot, causing the robot's controllers to follow the trajectory. Before you do this, make sure the following prerequisites have been met:

To do this, the warehouse viewer constantly monitors the robot's state, and records a discrete set of states observed during trajectory execution.

The markers for a trajectory can be turned on and off by checking the "Visible" check box for that trajectory.

Just as with the motion plan requests, collisions with the current state of a trajectory can be visualized as red spheres in RVIZ by checking the "Show Collisions" check box for that trajectory.

Just as with motion plan requests, the colors of trajectories can be selected by clicking on the button with the 3-tuple representing red/green/blue color values for that trajectory.

To save your planning scene, simply choose the menu

Your planning scene will be saved with the current time stamp. (Note: At this time, it is not possible to overwrite existing planning scenes.)

To load a planning scene, simply choose the menu

This will bring up the load planning scenes dialog:

You can refresh the database by pressing "Refresh ..." this will re-pull all of the planning scenes from the database.