Do scene recording on a real robot

Description: In this tutorial we record a scene by moving the robot by hand to the objects of the scene.

In this tutorial we record a scene by moving the robot by hand to the objects of the scene.

Make sure you are using the robot as master, to do this you have to export the following environment variables:

Do the following steps on your robot (e.g. via SSH):

The actual recording of the scene is divided into three parts. First we have to capture each object of the scene once. After that is done, we recognize and record the objects of the scene again, but now we can move them slightly to represent slightly different arrangements of the same scene and uncertainties in the objects poses. To capture the objects you will have to move the robot Platform from one recording location to another by hand, as the robot obviously does not yet know where those objects are located. After that, we train the scene to create an ism model. This is needed in order to have associations between the objects in the scene.

1. Move the robot Platform to the first location from where you want to record objects.

2. In Rviz, click on "2D Pose Estimate" and the click on the current location of the platform on the map. Hold the mouse button and drag it until the appearing green arrow has the same orientation as the robot 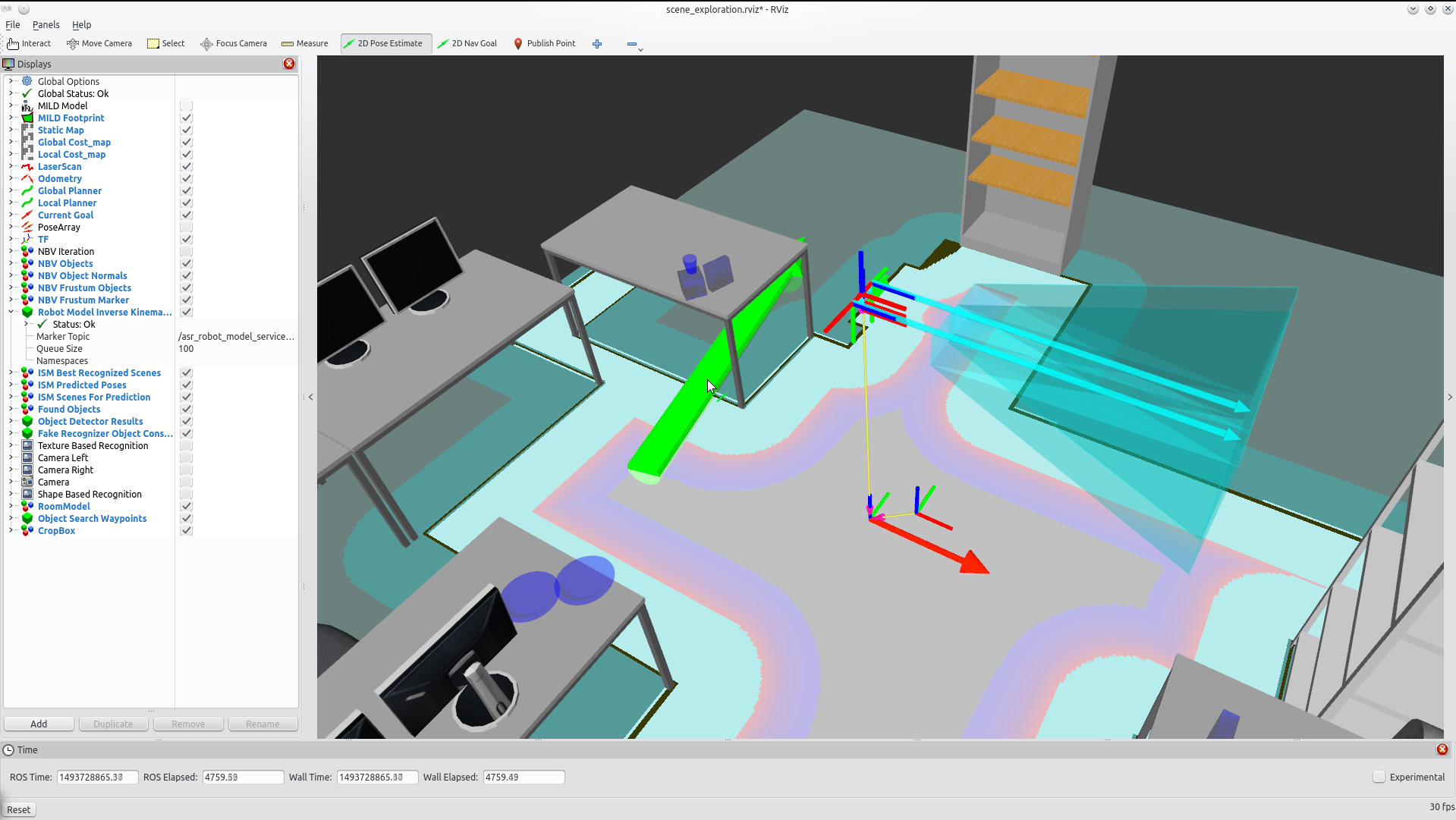 3. Use the ptu cli_controll.py (in tmux window 2:ptu the lower right panel) to control the tilt and pan of the cameras so that they capture the objects you want to record from the current position. Make sure that those objects are fully in the field of view of both cameras. You can check this in rviz using the camera view. 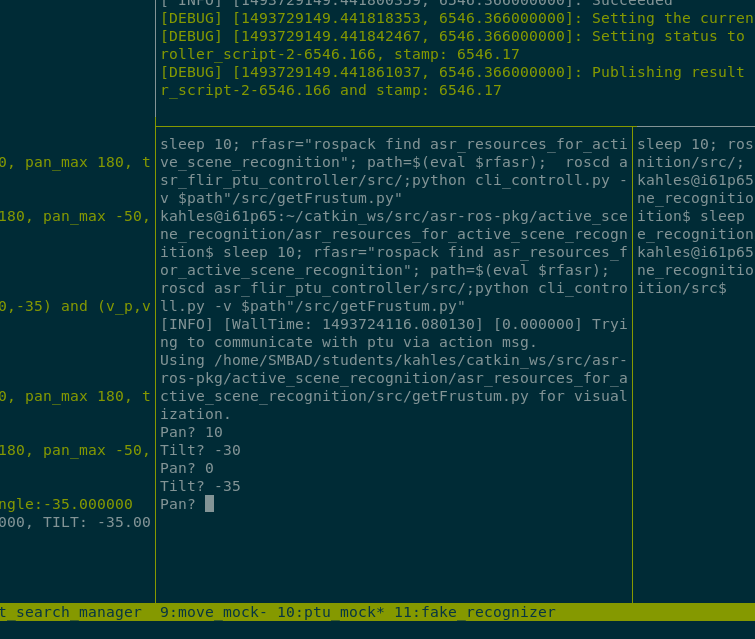 4. For each object you want to record you have to start the recognizers, therefore use tmux "window 5:recorder" the lower panel. issue the command start, ObjectName,recognizertype. This tells the object recognizer to look out for the object specified by ObjectName and recognizertype. If you struggle at this point see AsrResourcesForActiveSceneRecognition, section 3.3. to see how this tool works.

6. For each object you just have started the recognition, issue the command stop, ObjectName,recognizertype so that the object recognizer stops looking for them.

7. Slowly move the robot Platform to the next location. If you are to fast there might be problems with the robots localisations and the following recordings will be flawed.

8. Repeat Step 3 to 7 until you have captured all objects of the scene once.

In Part Two we alter the objects poses slightly by moving them around and capture that process. The procedure is the same as steps 3 to 8 in part one, only step 5 is different and you don't have to execute step 6.

Once you are done recording all objects, stop the recorder with ctrl + c.

To train the scene, we need to launch the trainer. It will modify the database you set in sqlitedb.yaml in the asr_ism package. If you don't want the database to be modified in place, make a backup of it first. Then execute

It will print process information and print done(n) if it has finished. Press ctrl+c to quit the trainer. 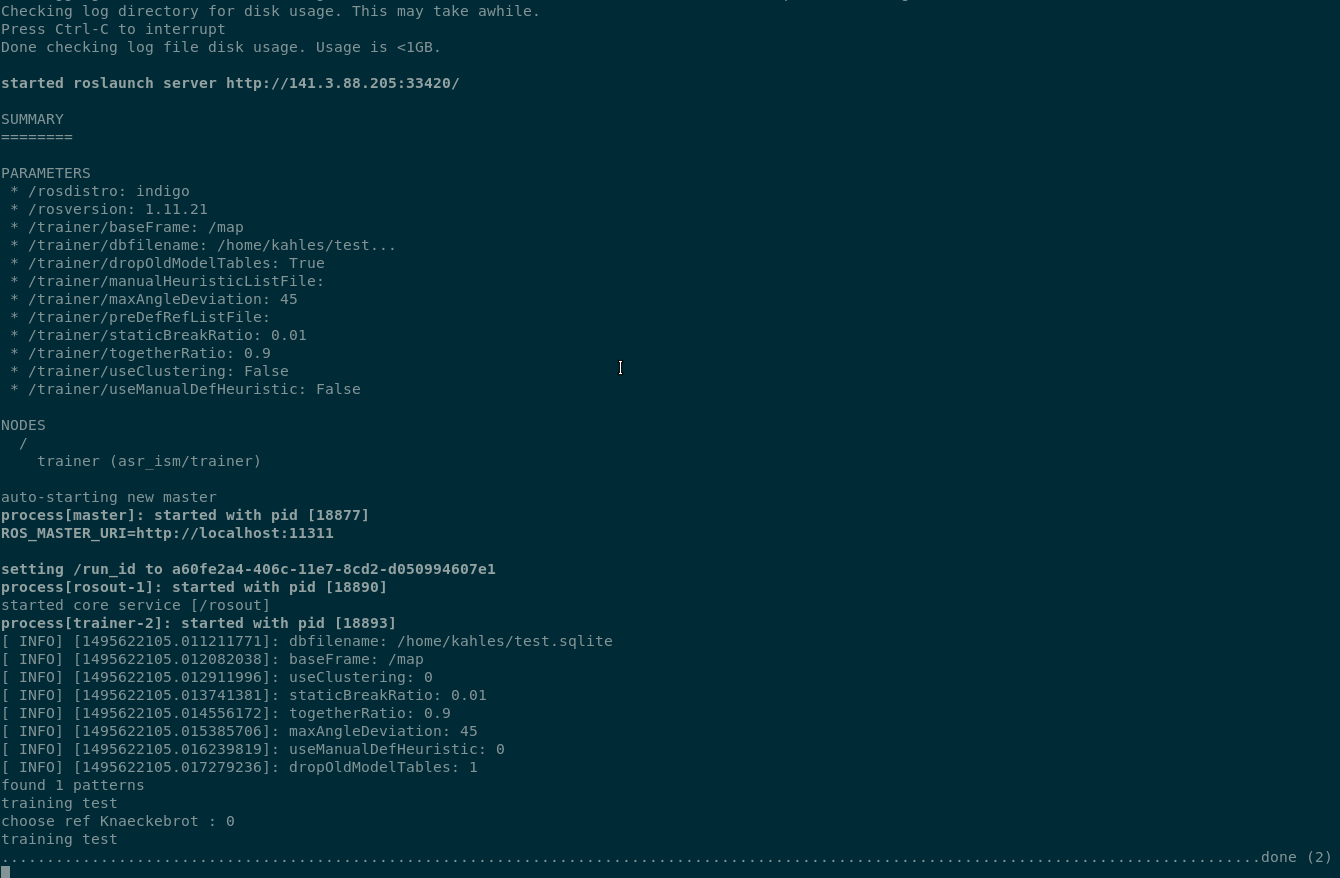 You're done with recording the scene. Now proceed with the next tutorial, doing scene recognition with the recorded scene.