Assistive_teleop provides an accessible interface for control of a PR2 by persons with severe motor disabilities. It is designed for use with an assistive HCI device providing control of mouse movement and a single (left) click. The interface is presented in a web browser, requiring no installation by users, and allows low-level control of all degrees of freedom in the PR2, provides visual feedback, and provides semi-autonomous functions for general manipulation and performance of Activities of Daily Living (ADLs), with the intention of allowing users greater control over their environment as well as their own bodies, and providing increased independence. This package is a direct product of the Robots for Humanity effort, a collaboration between Willow Garage and the Healthcare Robotics Lab at Georgia Tech. 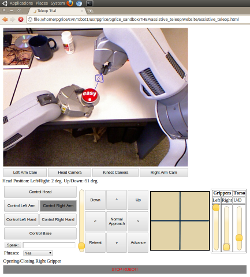 The web interface is served directly from the robot on port 8000 using roswww. To launch the web server and other back-end services:

Point a Chrome web browser to:

The interface provides visual feedback using the mjeg_server from bosch-ros-pkg to stream images from the PR2's right wide_stereo camera, either of the forearm cameras, and an added kinect sensor on the head of the robot. The forearm camera image streams are rotated using the image_rotate package so that the image is always 'right-side-up'. Buttons beneath the image stream allow for user camera selection. Also, when using Normal Approach, the camera stream will be modified to include an arrow indicating the point in the image and normal direction which has been selected, in order to provide confirmation that the robot is attempting the desired behavior.

Text feedback is displayed beneath the video, providing an indication of the action currently being taken by the robot. While somewhat trivial for low-level, immediately responsive control, this becomes extremely valuable for longer-term, semi-autonomous behaviors, so that the user is constantly aware of what the robot is doing.

In order to manage the PR2's many degrees of freedom, control of the robot has been heavily subdivided based on the part of the robot being controlled and the form of control being used. Under the default controls tab, the selection of a component to control is placed on the left, and alters the actions performed by the control inputs. All motions (except base movement) are performed in discrete movements. The relative step size for a given input can be adjusted (+/-100% of the default) with the slider to the left of the command buttons. The scaling value will remain set for each portion separately, but will reset when the page is refreshed.

When Control Head is selected, the control inputs provide arrows for looking up(^), down(v), left(<), and right(>). In addition, the center button will point the head at the base of the robot, which can be used for navigation while driving. Lastly, this also exposes controls to direct the head to persistently follow either the left or right gripper.

Control Right/Left Arm provides access to low-level control of the arm position of the PR2. The arrow buttons send commands in either the /torso_lift_link or 'l/r_gripper_tool_frame', as selected in the dropdown menu. These commands attempt to move the arm a small distance in the given direction while maintaining the gripper pose, or else rotate the gripper about the tool frame while maintaining this end-effector position.

Additionally, this sub-division also exposes controls for performing a Normal Approach, which will attempt to place the gripper perpendicular to any arbitrarily indicated point visible in the kinect image. This is performed by selecting Normal Approach for the desired arm, and clicking a desired point on the image. Using pixel_2_3d to determine the associated 3D point in space and a vector normal to the surface at that point, the interface attempts to use move_arm motion planning to place the gripper 20cm away from the point, with the tips of the gripper pointing perpendicular to the surface.

In combination with this function are controls to Advance and Retreat the gripper. These commands will move the gripper directly forward or backward along the current orientation, allowing for easy grasping and manipulation at arbitrary gripper orientations. While designed for use with Normal Approach, these functions are completely general, and will work at any point in time when using the interface to control the robot.

Selecting Control Right/Left Hand exposes controls for directly commanding the joints of the PR2's 'wrist': Forearm Roll, Wrist Flex, and Wrist Roll. The position of the arm is determined by the origin of the /wrist_roll_link, and so these commands can extend the reach of the PR2 by extending the wrist flex beyond the current position of the arm.

When Control Base is selected, control inputs are exposed for driving the robot forward/backward, strafing left/right, and turning in place. Driving is the only motion which receives velocity inputs, and consistent motion can be achieved with a click-and-hold.

Currently, clicking anywhere on the image defaults to pointing the head to look at the 3D point associated with the image point where the click occurs, as returned by pixel_2_3d.

Similarly, the open/close state of the grippers is controlled by sliders, with the grippers being open at the top of the bar, and closed at the bottom. These sliders also report the current position of the gripper, and will display changes over time if the grippers are sent large commands.

At the bottom of the interface, a large button labeled STOP ROBOT acts as a user-controlled run-stop, and immediately halts the PR2's motors. This replaces the interface with a warning message, and a Reactivate button to restart the motors. Be careful of the movement of the robot when run-stopped (gravity acting on head and arms, spring tension in arms, etc. ) as well as the possibility of the robot dropping any held objects.

First and foremost, the work depends upon the insight, drive, and feedback of Henry Evans, as well as the support of his family.

This package depends heavily upon the rosbridge_suite and mjpeg_server packages.