Description: This tutorial will describe how to add a new cart to the cart pushing stack.

This tutorial describes how to configure the cart navigation stack for use with a new cart. Note that the stack is currently only supported on the PR2. We further require that the cart is holonomic. The following three files contain parameters that need to be updated given a new cart: 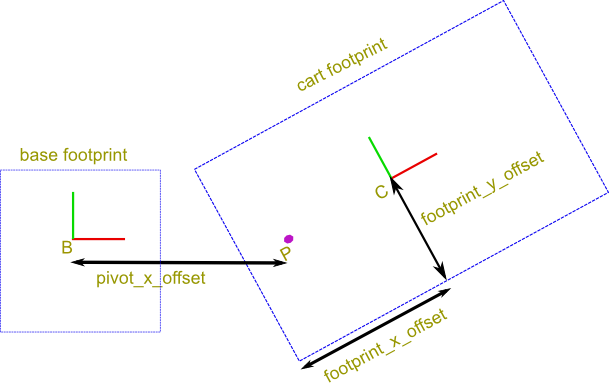 The next figure shows the situation when the cart has been rotated. The cart frame has now moved relative to the base frame. Note, however, that the pivot point has remained fixed in both the base and cart frames. The location of the pivot point thus determines the configuration space of the cart-base combination. The choice is between allowing very tight in-place turns, that might require awkward, possibly infeasible, arm configurations, and loose turns that allow the arms more freedom.

All parameters are in wg_holonomic_cart_params.yaml unless specified otherwise.

The cart polygon must also be separately specified for the laser filter. All laser returns lying within this polygon are ignored. The polygon is specified in params/polygon in the cart_footprint_filter section of wg_holonomic_cart_filter_params.yaml.