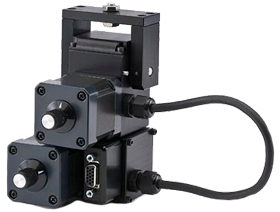 This driver is particularly intended for use with the FLIR D46 line of pan-tilt units. However, because FLIR uses a common serial protocol for their products, this node is likely to work on related FLIR devices, or be adaptable without too much trouble. 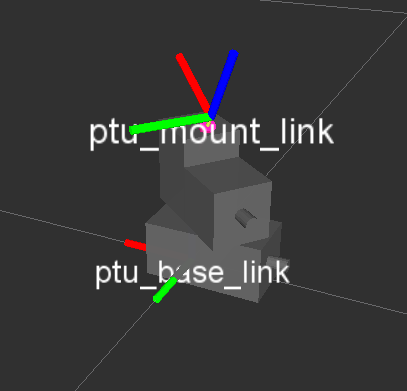 Alongside the basic serial driver, there is also included a URDF description of the D46. This is structured as a xacro macro, so it should be straightforward to integrate into your complete robot description. The example.urdf.xacro file provides an example of how to use the macro.

To visualize the model without running the driver, you can launch it like so:

This should produce an rviz window showing the device model, as well as a joint_state_publisher window letting you adjust the joint values.

To try out the driver prior to integration with a larger robot, you can connect and power it, and run:

Once up, you can bring up the visualization in rviz:

You can send it one-off commands using a provided convenience script:

The basic driver is stable and usable, but various improvements and fixes are needed, as tracked on Github. Pull requests addressing these are very welcome.

The driver portion of this package is an evolution of the old ptu46 package, and thus retains its GPL licensing. However, as it is a standalone binary, this should not be an obstacle to using this code. The URDF description macro is BSD, so you are free to integrate that into other projects without implications on their licensing.