netft_node is ROS node that communicates with NetFT and publishes force and torque data as ROS topic. This tutorial describes setting up Linux network to communicate with NetFT, and running netft_node

The default jumper settings on the NetFT device cause it to come up with static IP address of 192.168.1.1 . The best way to communicate with device is to connect it to stand-alone Ethernet interface on a Linux box an configure interface with static IP in same network (such as 192.168.1.100).

Determine what network interface NetFT is connected to

In Linux there multiple ways to determine what network interface device is connected to.

NOTE: The lo interface is the loopback device. It is a virtual interface that you should ignore.

To see all Ethernet interface (enabled or not) run :

On my computer I see two more devices eth1 and eth2 that is not enabled:

You can try enabling Ethernet interface ethX by running:

Say you've determined that ethX is the Ethernet interface that the NetFT is connected to. If NetFT is configured with default IP address you should be able to communicate with it by running:

Verify connectivity with device by running

If above command works, you should be able to view webpage from webserver running on NetFT by typing http://192.168.1.1 into web browser's address bar.

If can view NetFT's webpage with address such as 192.168.1.1 you should be able to run ROS node by running netft_node with same address.

If the node doesn't quit immediately with an error message, then it should be running. You view ROS messages from device by running

It is also possible to plot data. An easy way to do this is use plot.sh script.

You should see a window that has two graphs. 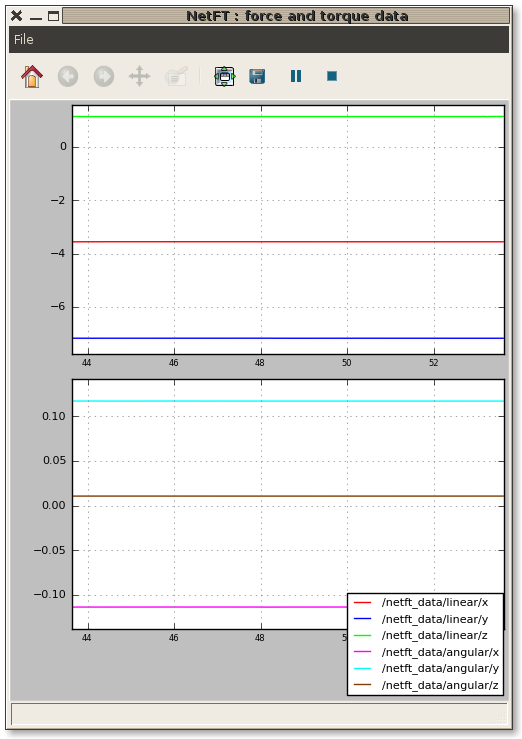 In next release of ROS the publishing rate can be changed from hardcoded default of 100Hz with with the --rate argument.

Where ethX is network interface NetFT box is plugged into, and xxx.xxx.xxx.xxx is IP address on same sub-network as NetFT box.