This stack contains code for robot behaviors and radio frequency perception techniques that enable a PR2 (modified with articulated patch antennas) to efficiently discover, locate, and interact with long-range (UHF) RFID tags applied to locations, objects, and people of interest. Sample capabilities include: estimating the bearing toward a tag, RFID servoing, and RFID search. These techniques form the foundation of Travis Deyle's PhD thesis; we also demonstrated sample applications such as medication delivery, sensor fusion, and RFID search in home environments.

These algorithms (predominantly) use two RFID reader antennas (Laird S9025P) affixed to the PR2's shoulders via a pan-tilt system built using Robotis servos. Both antennas are connected to a single ThingMagic M5e reader. The system is shown in the figures below. 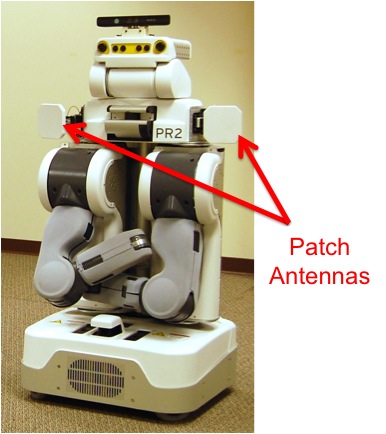 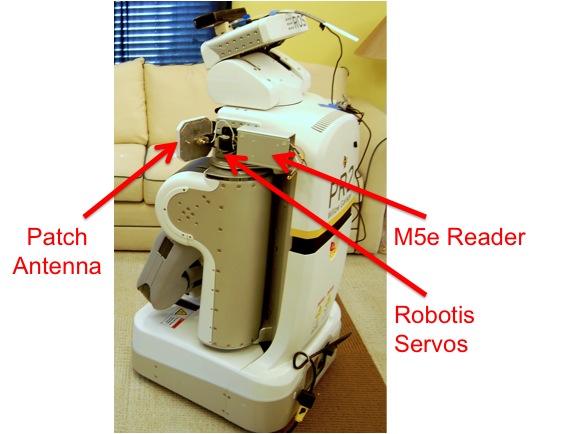 There are a number of packages in this stack:

This stack is not strictly self-contained (as the dependencies would suggest). Rather, it is simply a collection of packages, each with their own dependencies. For example, it relies on several packages in gt-ros-pkg. However, this repo does not have a proper stack (release) to build dependencies against. Rather, it was last tested on revision 1907 in August 2011 under ROS Diamondback on the PR2. I am told by labmates that some of the dependencies are unlikely to function under Electric without modifications. YMMV.