The Retalis language (Etalis for robotics) supports a high-level and an efficient implementation of a large variety of robotic sensory data processing and management functionalities.

After you program retalis as described below, rune it by:

Retalis is programmed using three files, located in the application_source folder of the retalis package:

This node automates the conversion between ros messages and retalis events

The usecase is to position the recognized objects in the world coordination frame and reason on high-level events occurring in the environment.

The following clause in pub_sub.xml subscribes retalis to the tf topic:

Similarly, the following clauses in pub_sub.xml subscribe retalis to messages of recognized faces and objects.

Messages received by retalis from the subscribed topics are automatically converted to events. For example, the following message of type tf/tfMessage 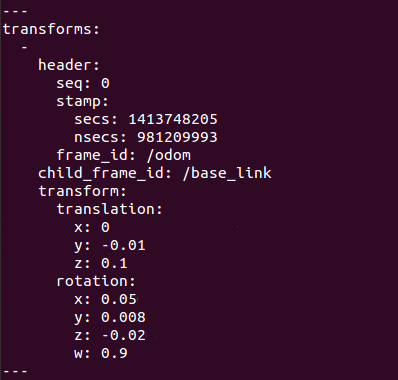 is converted to the following event:

Events are time-stamped according to header times of ros messages. If a message does not have a header, it is time stamped with ros::Time::now(). The format of time-stampes are datime(Y,M,D,H,Min,S,Counter) where Counter encodes nanoseconds since seconds (i.e. stamp.nsec in ros messages). For example, the above tf/tfMessage message contains a list of geometry_msgs/TransformStamped messages (only one here). While each geometry_msgs/TransformStamped message is time-stamped, the tf/tfMessage itself does not have a header. Therefore, the corresponding event is stamped with the current time.

Each ar_pose/ARMarkers message from ar_pose contains a list of recognized objects, each represented by a ar_pose__0__ARMarker message. The following rule generates a separate event for each object.

where Name represents a recognized object and (Sec,NSec) encodes the time of recognition. This time corresponds to the time of taking the picture at which the object was recognized. This time is taken from the header file of the corresponding ar_pose__0__ARMarker message. The events is also time stamped with (Sec,NSec).

We saw in Section 4.1.3 that the split_tf and split_ar_pose functions are implemented as Prolog clauses. The eventRules.txt file can include an arbitrary Prolog program to encode a domain knowledge. We also saw in Section 4.1.4 that how memory instances are used to maintain histories of events

The Prolog program in eventRules.txt together with the the dynamic knowledge maintained by memory instances represent a Prolog-based knowledge base. This knowlede base can be queries by event-processing rules, for instance, as in Section 4.1.3. It can be also queried directly by a ros service (in our ToDo list).

Queries to the knowledge base are normal Prolog queries, but with two main differences, described in the following sections.

A memory instance is accessed by its Id. There are three types of access:

An example of using prev and next terms is in implementation of the interpolate_tf(Id,T,Pos) function, in the eventRules.txt. The input values to this function is the Id of a memory instance, keeping the history of some tf events, and a time point. The tf events represent observations of the transformation between two coordinate frames over time. From these observations, this function interpolates the transformation between the frames at time T. This is implemented as follows. The last observation before T and the first observation after T are found using the prev and next terms. Then the position is linearly interpolated by making a function call to the OpenGL Mathematics library that has been integrated with retalis.

The transform_marker(RelativePos,Time,AbsolutePose) function in eventRules.txt uses the interpolate_tf function to position an object in the world reference frame. Given RelativePos, the position of an object relative to the camera at time Time, this function computes AbsolutePose, the position in the world, as follows. First, it changes the time format from ros time to datime. Then, it interpolates the transformation between /odom-to-/base_link, base_link-to-torso, torso-to-Neck, Neck-to-Head and Head-to-CameraTop_frame at the time Time. Third, it applies these transformations on the RelativePos by making a function call to the OpenGL Mathematics library. It is assumed that the /odom frame is aligned with the world reference frame.

We saw in Section 4.1.6 that how calling interpolate_tf(odom_base,t,Pos) function interpolates the position between the /odom and /base_link coordination frames at time t. This function uses next and prev terms to access the first and the last observations after and before t, respectively. To interpolate the position at t, the position should have been observed, at least once, after t. The observations, tf/tfMessage messages here, are received asynchronously. Therefore, the interpolate_tf(odom_base,t,Pos) function should be evaluated only after the odom_base memory instance has been updated with an event occurring after t. This is realized in retalis using a synchronized event, as follows.

The synchronized(Event,Query,SynchConditions) function, performs the Query, when the SynchConditions are satisfied and then generate the Event. Consider the following clause from eventRules.txt:

Such a PoseStamped event encodes the marker's name, its position in the world and the time of recogntion. The SyncConditions are the followings, specified in line 4:

These conditions specify that the transform_marker function should be evaluated, only after all odom_base, base_torso, torso_neck, neck_head and head_cam memory instances have been updated, at least once, with events occurring after time Z. The time Z is the time of recognition of the marker.

Retalis performs the synchronization of events in an event-driven and efficient way. The generation of a synchronized Event is posponed, until the syncConditions are satisfied. Postponing an event does not postpone the generation of other events and postponed events are generated as soon as necessary conditions are met.

The following clause in goalPredicates.txt creates a subscription:

The subscription subscribes the topic marker1 to the PoseStamped events in which Name is '"4x4_1"'. Such events are generated by the synchronized rule, presented in Section 4.1.7. They contain the position of the marker 4x4_1 in the world coordination frame. The id of the subscription is m1 which can be used to cancel the subscrition at any time.

This section evaluates the performance of retalis on the NAO application described in Example 1 (Section 4.1). Retalis is executed on an XPS Intel Core i7 CPU@ 2.1 GHz x 4 laptop running ubuntu 12.04 LTS. The performance is evaluated by measuring the CPU time used by the retalis program. In the following graphs, the vertical axis represents the percentage of CPU time and the horizontal axis represents the running time in seconds. The usage of the CPU time is logged every second and is plotted using "gnuplot smooth bezier".

The following figure shows the CPU time used by the retalis and retalis-ros-converter nodes when running the NAO example. The retalis node calculates the position of objects in real-time. It processes about 1900 events, memorizes 130 new events and prunes 130 outdated events per second. It also queries memory instances, 70 times per second. These tasks are performed using about 18 percent of the CPU time. In this experience, the retalis node has been directly subscribed to the tf and ar_pose_marker ros topics. The retalis-ros-converter only subscribes retalis to the face_recognition/feedback topic and converts and publishes events about objects' positions to ros topics. To have this setup, comments out the subscriptions to tf and ar_pose_marker topics in the pub-sub.xml file and instead, set the subscribe_tf_and_ar_pose_ boolean variable in the retalis_interface.cpp file to true. You should also recompile the package. 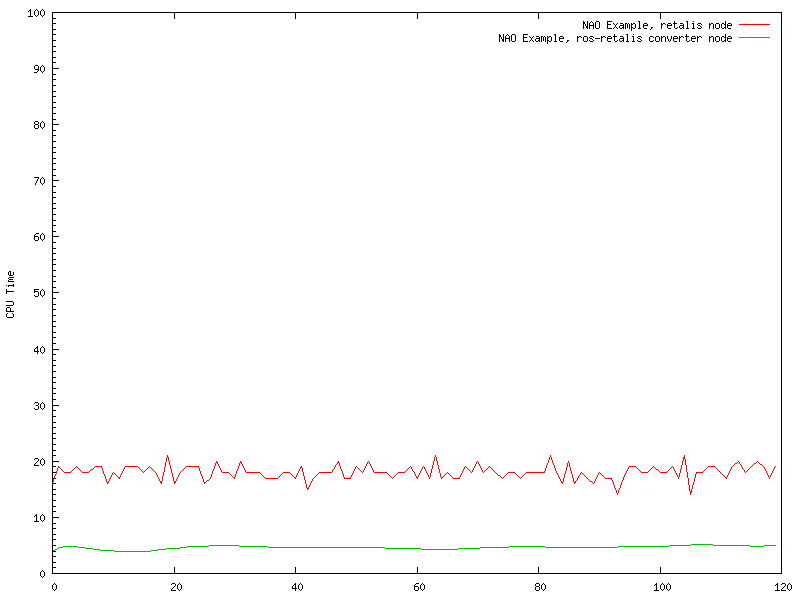 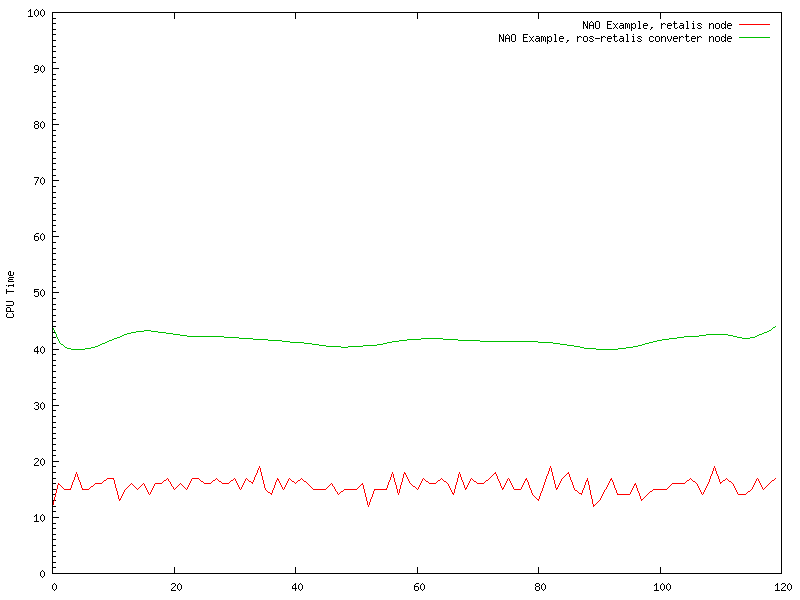 When an event is processed, updating memory instances includes the following costs:

The following figure shows the CPU time for a number of runs where up to 160 memory instances are added to the NAO example. These memory instances record a(X,Y,Z,W) events. Among the events processed by retalis, there are no such events. The results show that the increase in CPU time is negligible. This shows that a memory instance consumes CPU time only if the input stream of events contains events whose type matches the type of events the memory instance records. 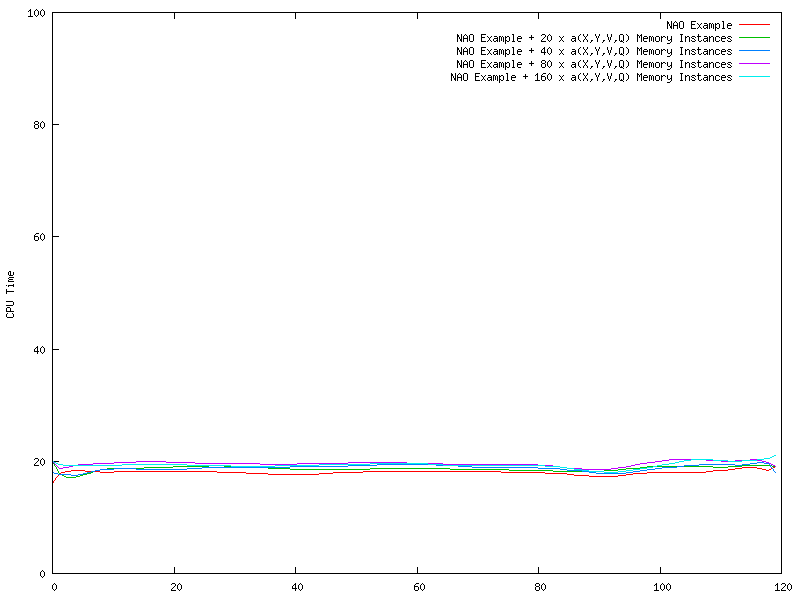 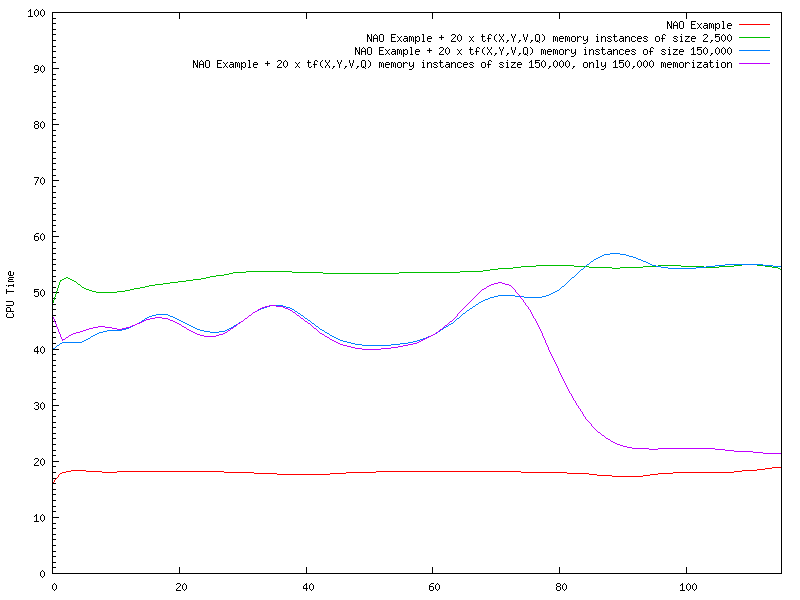 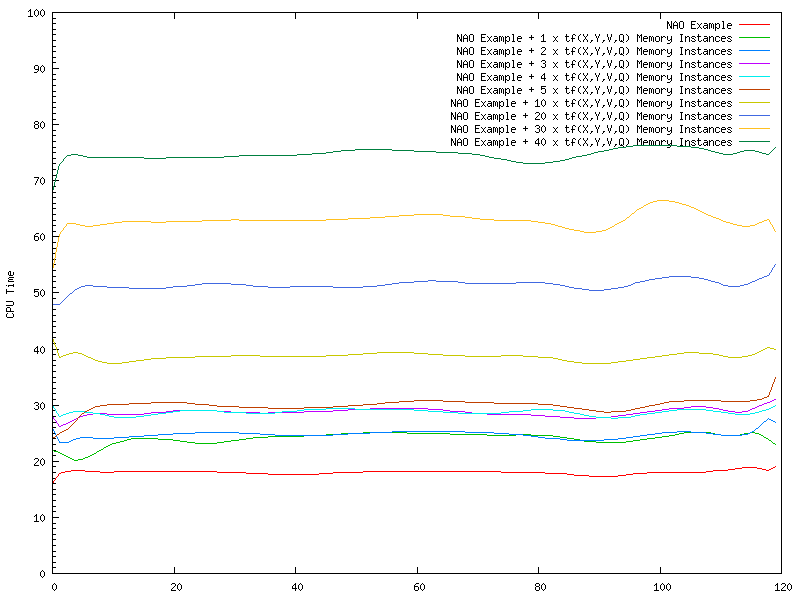 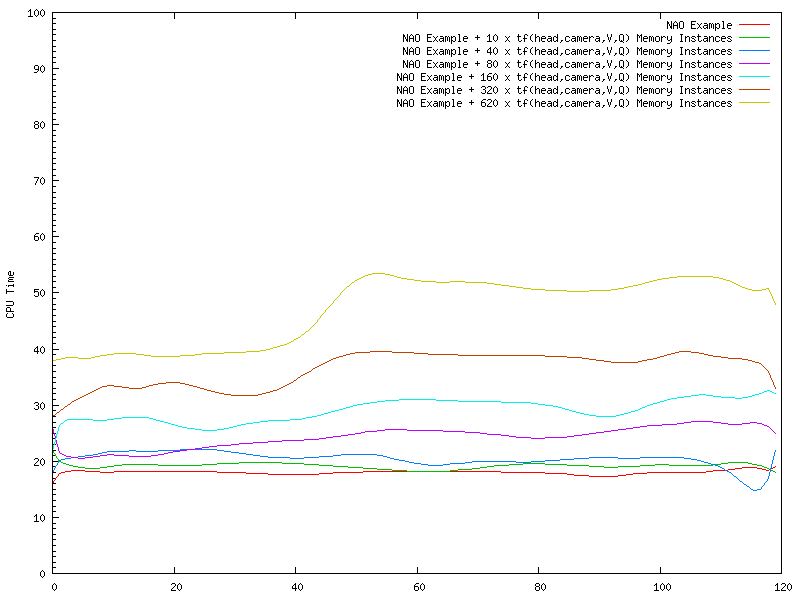 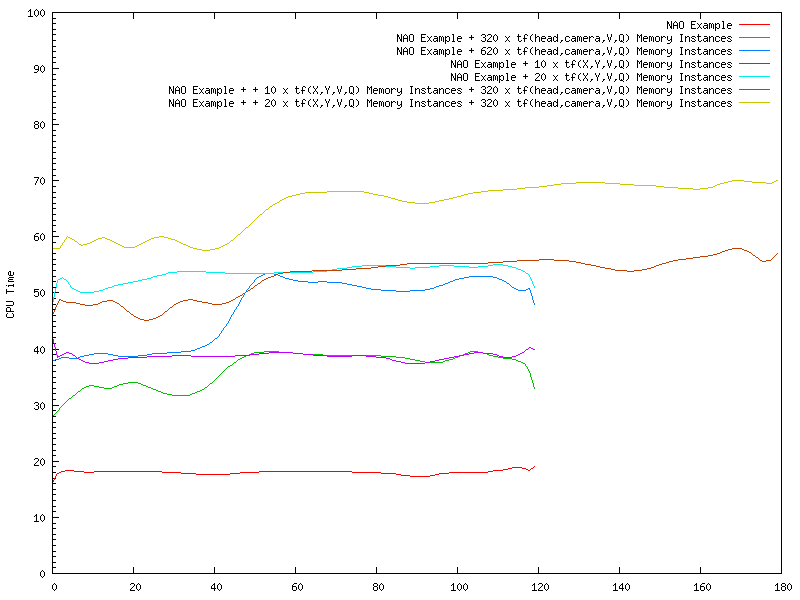 Retalis queries are Prolog-like queries executed by the SWI-Prolog system. The following evaluates the performance of next and prev terms and the synchronization mechanism which are specific to retalis. 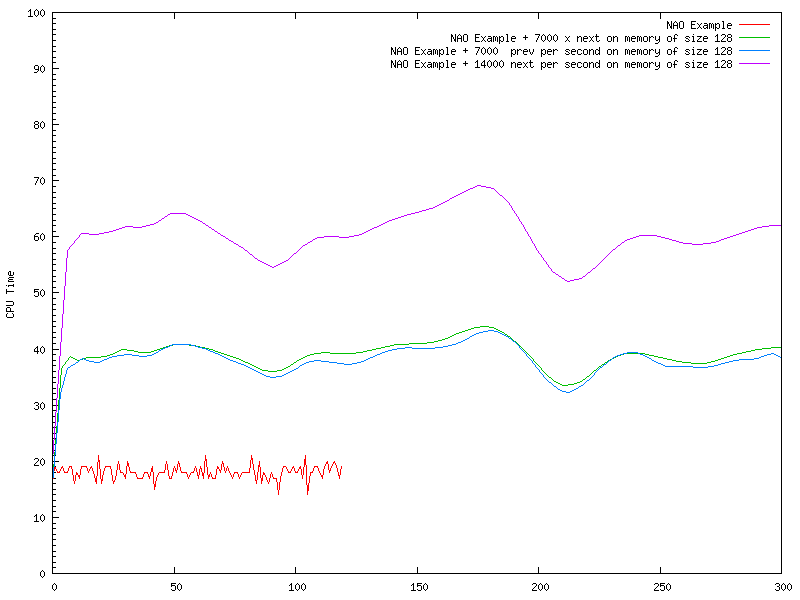 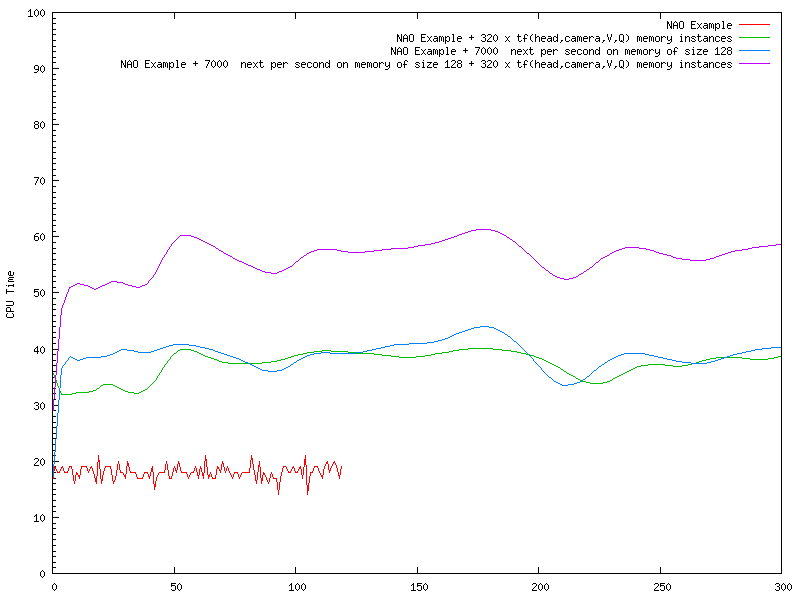 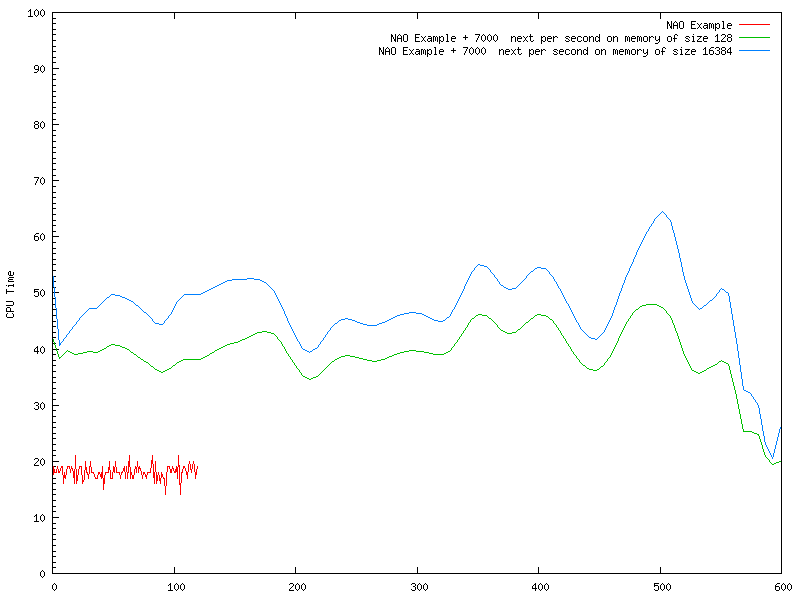 The red line in the following figure visualized the CPU time of the NAO example where in each second, 1000 next queries on a memory instance of size 2500 are evaluated. In addition, for each next query, a new event is generated. The green line visualizes the CPU time of a similar case where the next queries are synchronized. This experiment is conducted in a way that no query needs to be delayed. Coparing these two cases shows that when queries are not delayed, the synchronization cost is negligible. 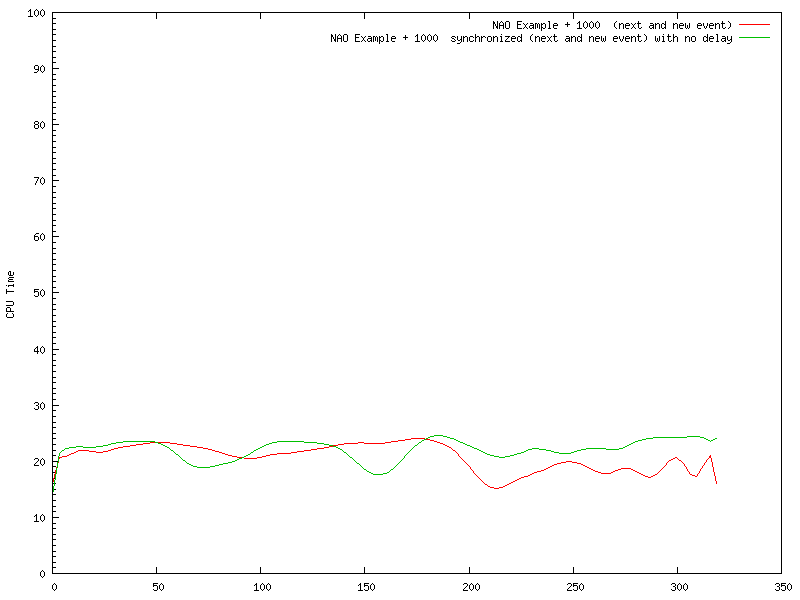 The following figure shows the CPU time of four cases. In all these cases, 1000 synchronized next queries are evaluated and 1000 events are generated in each second. The red line visualizes the case where no query is delayed. The green line visualized the case where queries are delayed for 5 seconds. In this case, the memory instance queried by a next term has not yet received the data necessary to evaluate the query. The query is performed as soon as the memory instance is updated with relevant information. There are 1000 queries per seconds, each delayed for 5 seconds. This means there exist 5000 monitors at each time. These monitors observe 1900 events processed by retalis per second. We observe that for such a large number of monitors observing such a high-frequency input stream of events, the increase in CPU time is less than 30 percent. 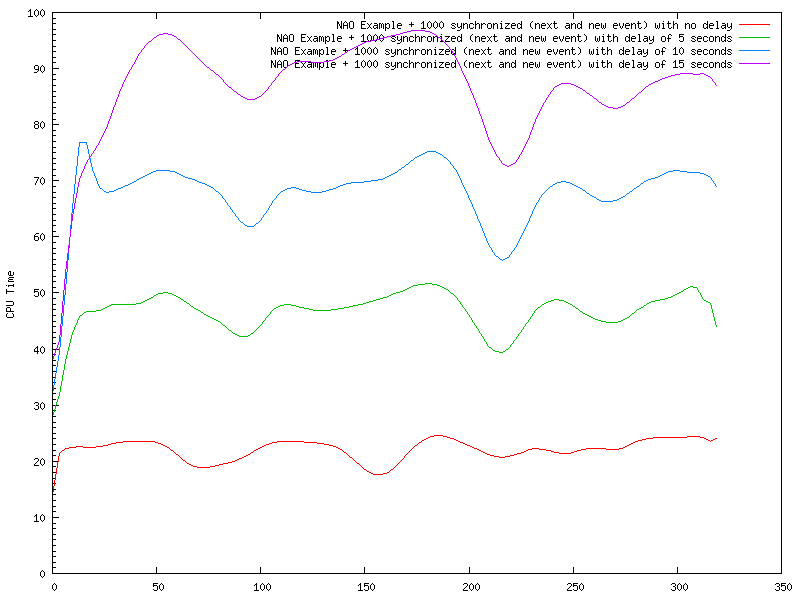 On-flow processing functionalities in retalis are performed by Etalis. Etalis execution model is based on decomposition of complex event patterns into intermediate binary event patterns (goals) and the compilation of goals into goal-directed event-driven Prolog rules. As relevant events occur, these rules are executed deriving corresponding goals progressing toward detecting complex event patterns.