rl_msgs is a package of ROS message definitions, which are used for a reinforcement learning agent to communicate with an environment.

This package defines a standard way for agents and environments to communicate through ROS messages. In ROS computation is done by nodes that perform different tasks that communicate through a set of ROS messages. ROS provides the framework to publish, subscribe to and receive these messages, in addition to tools for logging, displaying, plotting, and playing back ROS messages. This package defines a set of ROS messages for a reinforcement learning agent and environment to communicate. These messages are similar to the messages used by RL-Glue (Tanner and White 2009), but are simplified and defined in the ROS format.

Please take a look at the tutorial on how to install, compile, and use this package

Check out the code at: https://github.com/toddhester/rl-texplore-ros-pkg 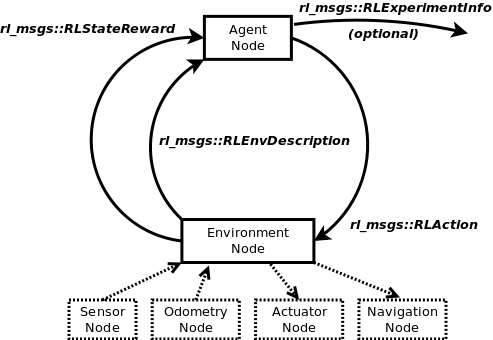 The framework is being designed to be as flexible as possible. While our algorithms and environments will mostly follow a certain style, we understand that every robot and every experiment differs. Our hope is to not force our philosophy onto other people, as long as you adhere to rl_msgs you can design and implement your algorithms and environments in your own style.

Messages passed from Agent to Environment

Messages passed from Environment to Agent