From a software perspective, the simulation setup consists of:

From a hardware perspective, the simulation setup consists of :

In general, performing Interactive Manipulation in this setup implies:

Use the built-in Ubuntu mouse-to-keyboard interface to type at the command line. We have tried hard to keep typing to a minimum, but some commands could not be avoided. We have also added a button to provide easy access to the keyboard: 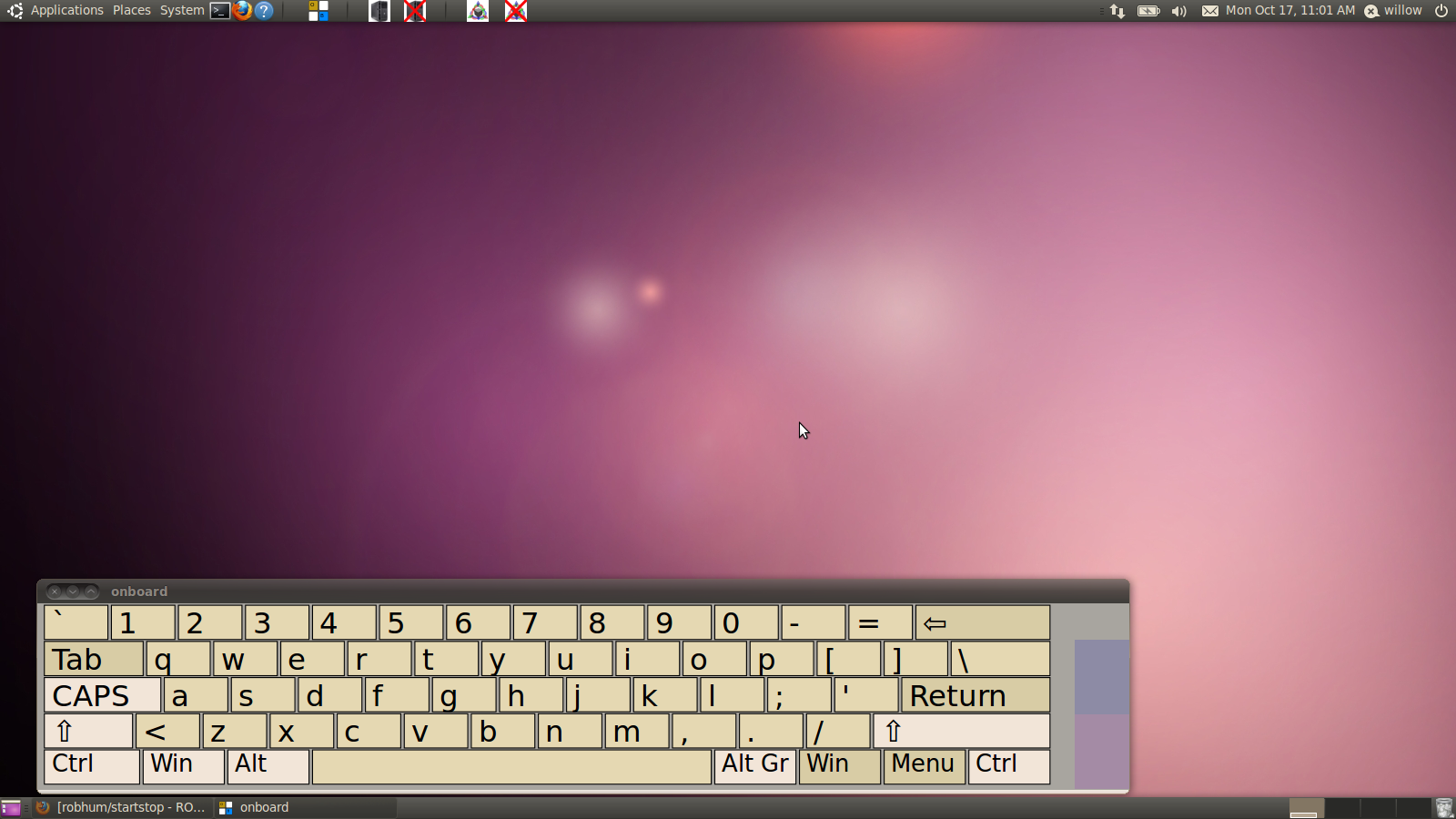 Starting the simulated robot and the manipulation tools

Since the simulated robot is started on the Server, this step begins with opening a terminal on the Server. The icon below creates a new terminal already logged in on the server:

After clicking that icon, the terminal opens up: 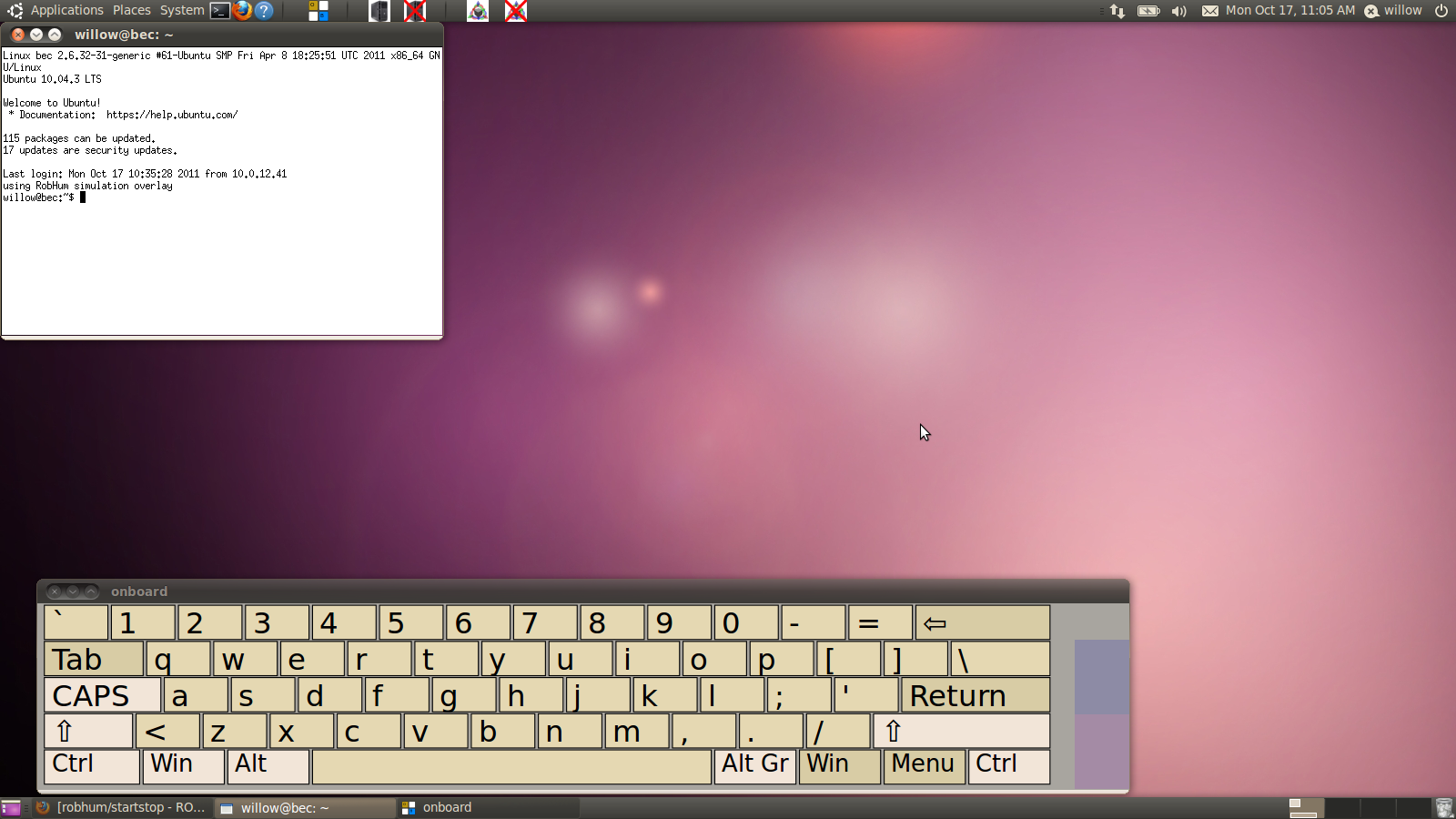 Inside the terminal, type ./sim_launch.bash. Note that typing ./s followed by Tab is usually enough to auto-complete. You will get prompted with a list of the simulation worlds that are available to be used. Choose on of them and click Enter.

The script will then start the simulation, followed by the manipulation tools. You should see the following output:

The last line will tell you that everything has come up correctly and it's ready to go.

A button provides easy access to the User Interface: 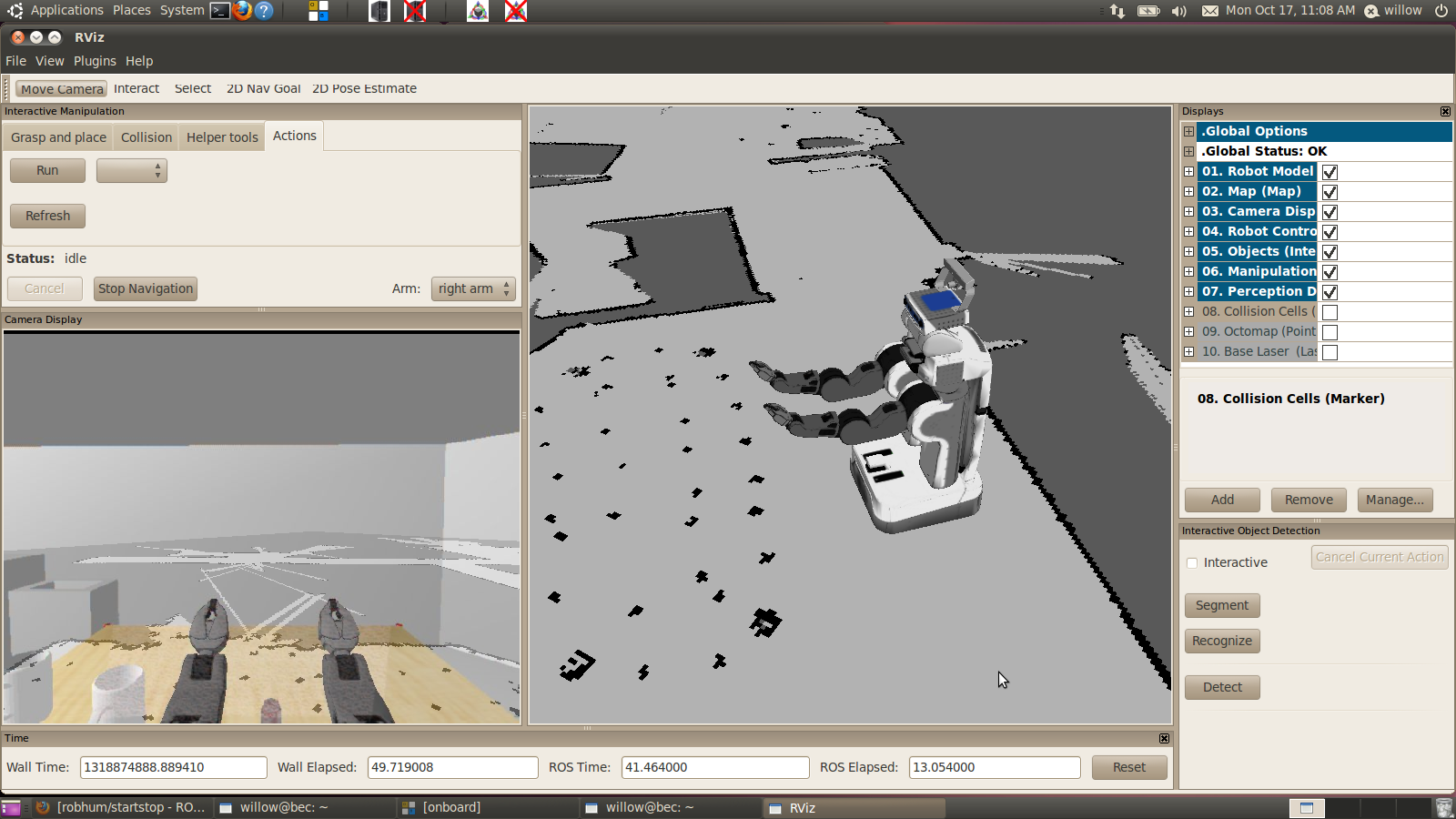 A quick system check that all is OK is to left-click anywhere in the "camera image" on the lower left corner of the User Interface. The simulation robot should move its head to "look" in the direction of the click.

This button kills the User Interface:

The terminal window on the Server (the one used earlier to start the simulation and the manipulation tools) should print:

At that point, the simulation can be restarted exactly as above.

Important: most of the robot control is done with the "Interact" button selected in RViz, like so: 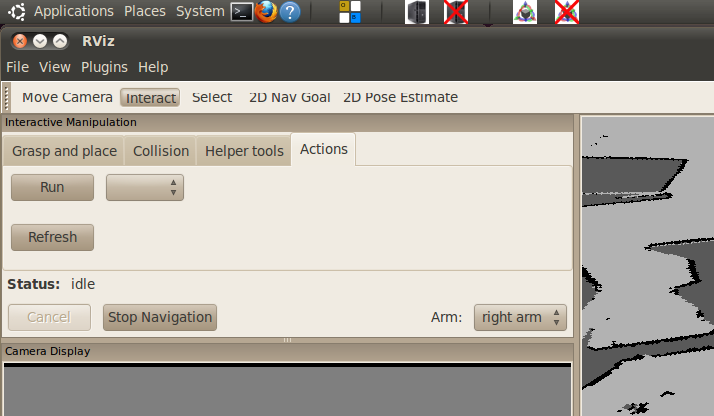 When the interact button is active, you should see two arrows (green/red) behind the torso, a little white cube above the head, and the upper arms should highlight when moused over: 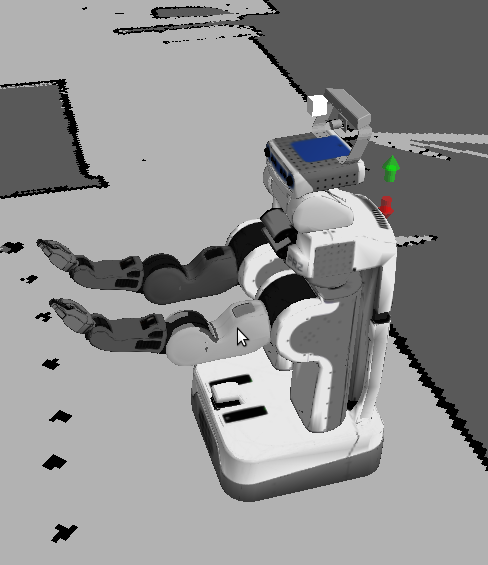 If this is not the case, something is wrong.

Simulation does not start

Sometimes, the simulation refuses the start, and the terminal in which you type ./sim_launch.bash never gets to the "Launch RViz..." line. Give it a minute to see if it makes it past it. If it does not, stop the simulation (the usual "Stop simulation" button used above), wait for the command prompt to come back, and try starting it again.

If this starts happening every time, or at least often enough that it's annoying, let us know and we'll look into it.

The next troubleshooting tips assume that the simulation and manipulation tools have been started and the User Interface is up. 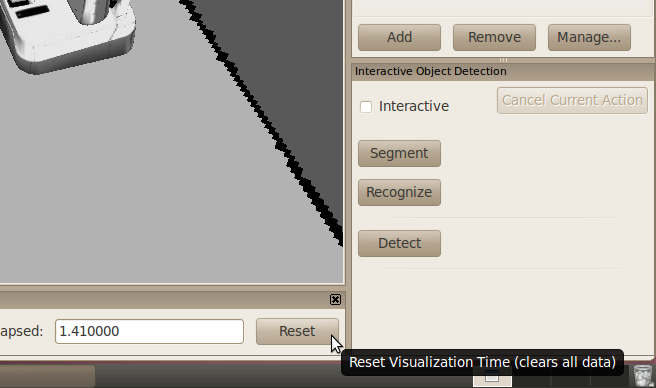 This is particularly helpful when the whole screen seems to go crazy with random triangles, like so: 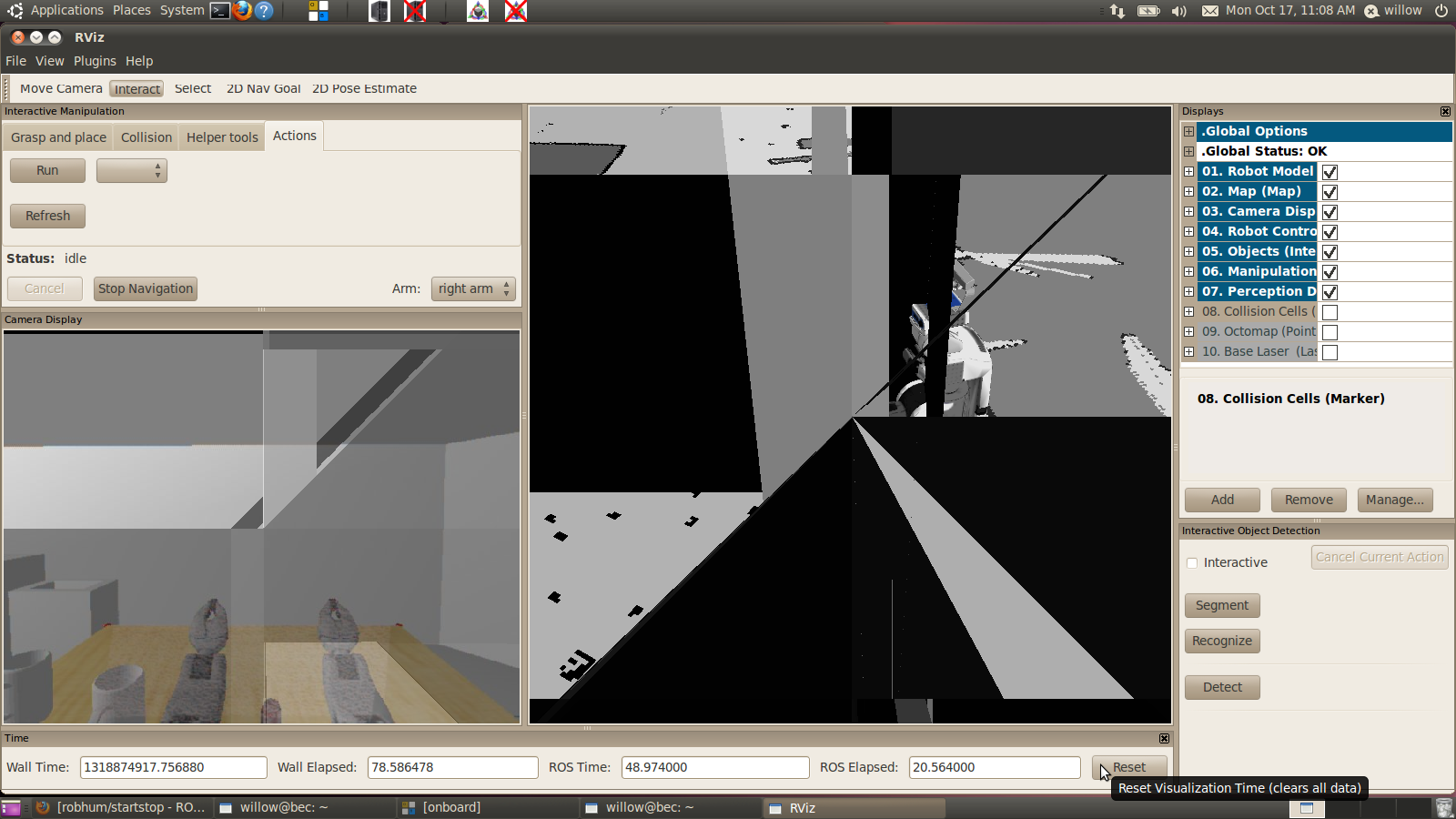 After clicking "Reset", the user interface takes a few seconds to come back.

This is particularly helpful when, even though the "Interact" button is selected, the arrows behind the torso do not show up. It should also be done when the "Robot Control" entry in the list glows red, as in the image above.