Note: This page is obsolete.

See the swiftnav_ros page, which is maintained by Swiftnav, for updated information on piksi and piksi multi. This page is retained for historical purposes during the transition to the Swiftnav-maintained page, and may be deleted in the future.

This package is a ROS release of a driver for Swift Navigation's Piksi RTK GPS receiver module. A pair of Piksi modules connected by a wireless link provides the location of each receiver relative to the other with accuracy as good as a couple of centimetres, and in addition, each Piksi module provides its location with typical GPS accuracy (about 3 meters). Typically one module is a stationary base station, which may be located at a surveyed point, while the other is mounted on a rover and provides ROS navigation software with a highly accurate position relative to the base station.

See Wikipedia's Real Time Kinematic article for an explanation of RTK GPS. It is important to understand that RTK GPS does not give a 2cm-precision absolute position (lattitude/longitude). It gives a 2cm-precision position of a rover relative to a base-station. If the base station is at a surveyed point the relative position of the rover can be converted to an absolution position, but the RTK position reported by Piksi is its position relative to the base station.

Other configurations of two modules are possible, such as placing both on moving platforms. Each Piksi computes its position relative to the other. This symmetry of operation enables the robot's position to be found using position data from either the base station or the rover.

In a configuration with a base station and a rover one unit can be standalone (no attached computer, only a power supply) while the other is connected to a computer that guides a robot.

It is crucial to a successful integration of Piksi into your robot that you understand Piksi's and the antenna's mechanical, electrical, and performance characteristics. Refer to the Piksi deployment guide.

This driver publishes the following data on the ROS topics listed.

The frame_id field of messages is populated with "gps".

The swiftnav_piksi package is supported on ROS indigo and jade. Currently, you must build it from source, and also build a supporting non-ROS library: libsbp, from source.

The following steps build and install libsbp, which is needed to support the swiftnav_piksi package. Clone libsbp into a local directory, and build and install it. Comments follow a # below - they explain the step; do not type them. Caution: do not build libsbp in your catkin workspace - it is not "catkinized".

Build and Install the swiftnav_piksi driver

The following steps build and install this package into your catkin workspace.

Build and Install the Piksi Console

The Piksi console is an important utility for verifying correct operation of Piksi, and for monitoring it. To run on Ubuntu, it must be built from source. Follow these instructions to build and install the Piksi Console.

Follow the steps in the Piksi User Getting Started guide. After doing so, you will know how to use the Piksi Console to run Piksi in simulation mode (can be done indoors) and also how to make it report the rtk position of the rover relative to the base station (must be done outdoors).

You can do this test indoors.

With a Piksi connected to your ROS computer, start piksi_console and put the Piksi into simulation mode. Observe the simulated vehicle path on the baseline tab as shown below. 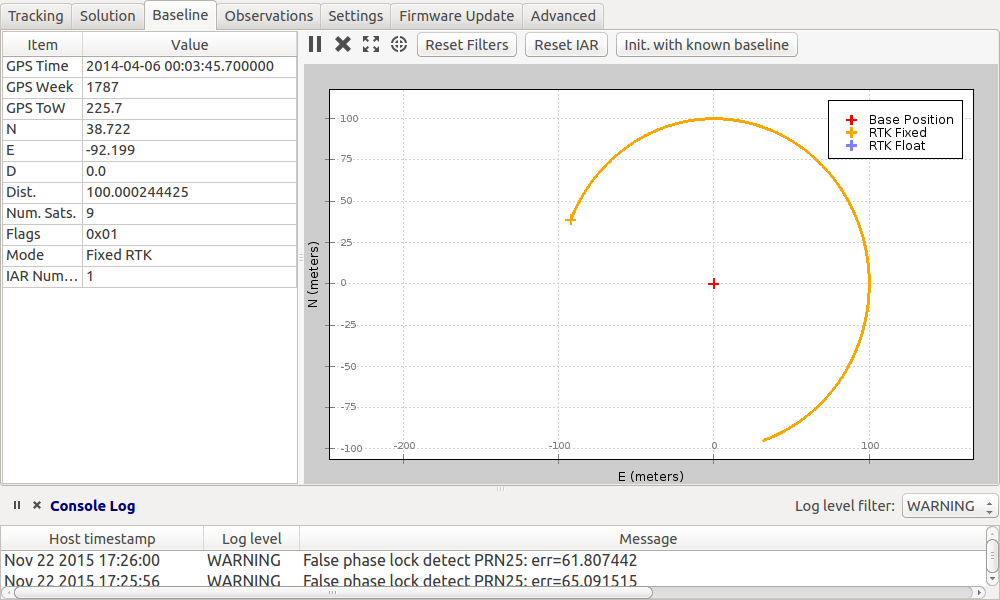 Exit from piksi_console and launch the swift_nav piksi demo script. The demo script launches both the driver, which publishes data from Piksi, and also a diagnotic monitor.

Note: the Piksi is assumed to be at /dev/ttyUSB0. If the Piksi serial port is different, edit the port parameter in swiftnav_piksi/launch/swiftnav_piksi.launch. 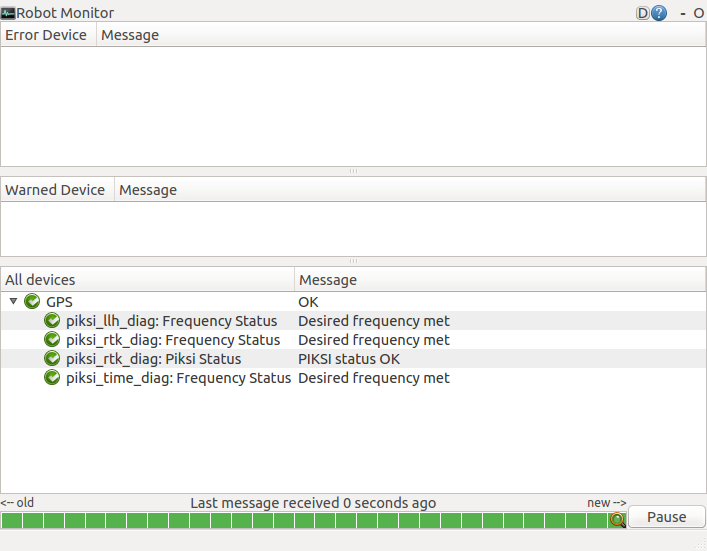 Expand GPS and double-click piksi_rtk_diag:Piksi Status. You should see GPS RTK meters north and east varying as the simulated vehicle travels in a circle. 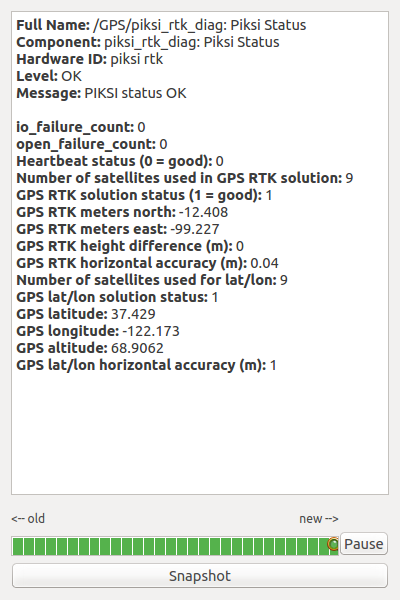 In another terminal, start rviz. In "Global Options" change the fixed frame to "gps". In Grid, set Cell Size to 5. Click Add -> By Topic and add the Odometry message under /gps/rtkfix. Change it's color to yellow to make it more visible, set "Keep" to 1000, and zoom way out. You should see the simulated vehicle circling the grid at a large radius as shown below.

Use Piksi with your ROS Robot

Congratulations! You have now successfully integrated Piksi with ROS, and can use its RTK-GPS accuracy with other ROS software for your outdoor robotic projects.

Thanks to Scott K Logan and Caleb Jamison for authoring this driver and contributing it to the community.