Getting Started with ECHO ONE

Description: Using the Toposens stack to connect to and display data from Toposens 3D ultrasonic sensors

This tutorial assumes that either Ubuntu 18.04 with ROS Melodic or Ubuntu 20.04 with ROS Noetic is used.

Currently the best way to install the Toposens ROS Software Stack is by downloading the software package from our toposens members site and following the instructions there to install the debians. AMD64 and ARM64 packages are available. In the future we will provide docker images in Docker Hub, but these images are currently out of date. Also, the software in the ros repositories is unfortunately out of date.

Connect ECHO ONE Sensor with CAN

The README of the toposens_echo_driver package provides instructions on how to enable the CAN interface for Ubuntu to be used with ROS.

Connect ECHO ONE Sensor with UART

UART is also supported as a communication protocol, but will be deprecated in the future. If you haven't yet, the user will need to be added to the dialout group to access serial communication:

To use this protocol you will need to add a parameter to the roslaunch command, com_interface:=UART, for example:

The command that most people should use to explore the sensor is below. This will set parameters, bring up rviz, and publish pointclouds.

Point data from the ECHO ONE is published on two topics:

The utility of these topics is further explored in the following sections.

The toposens_echo_driver_node translates the sensor data into custom toposens_msgs/TsScan messages.

Launch the driver node to read data from ECHO ONE. If the interface obtained in the previous step is the default (can0 for ECHO ONE), then the launch argument can_device can be omitted:

The sensor data is published to the the topic /ts_scans. View the incoming scans with: 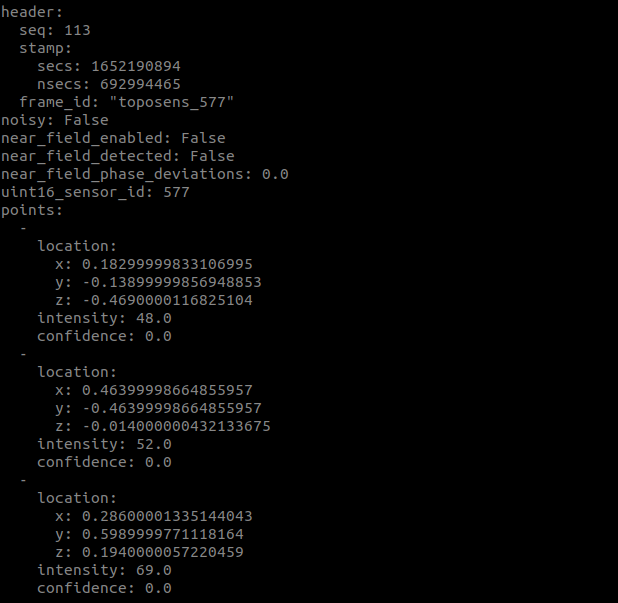 Due to the specular reflection behavior of ultrasound, the surface normal of the detected object can be represented by a vector pointing from the detected point towards the sensor’s position while the point was recorded. This normal vector is added to the PointCloud representation. For a more detailed explanation of the physics behind Toposens sensors see Physics of 3D Ultrasonic Sensors.

The driver node as well as the pointcloud node are launched from within one launch-file (as before, interface defaults to can0 and can be omitted in this case):

The pointcloud is visualized in RViz: 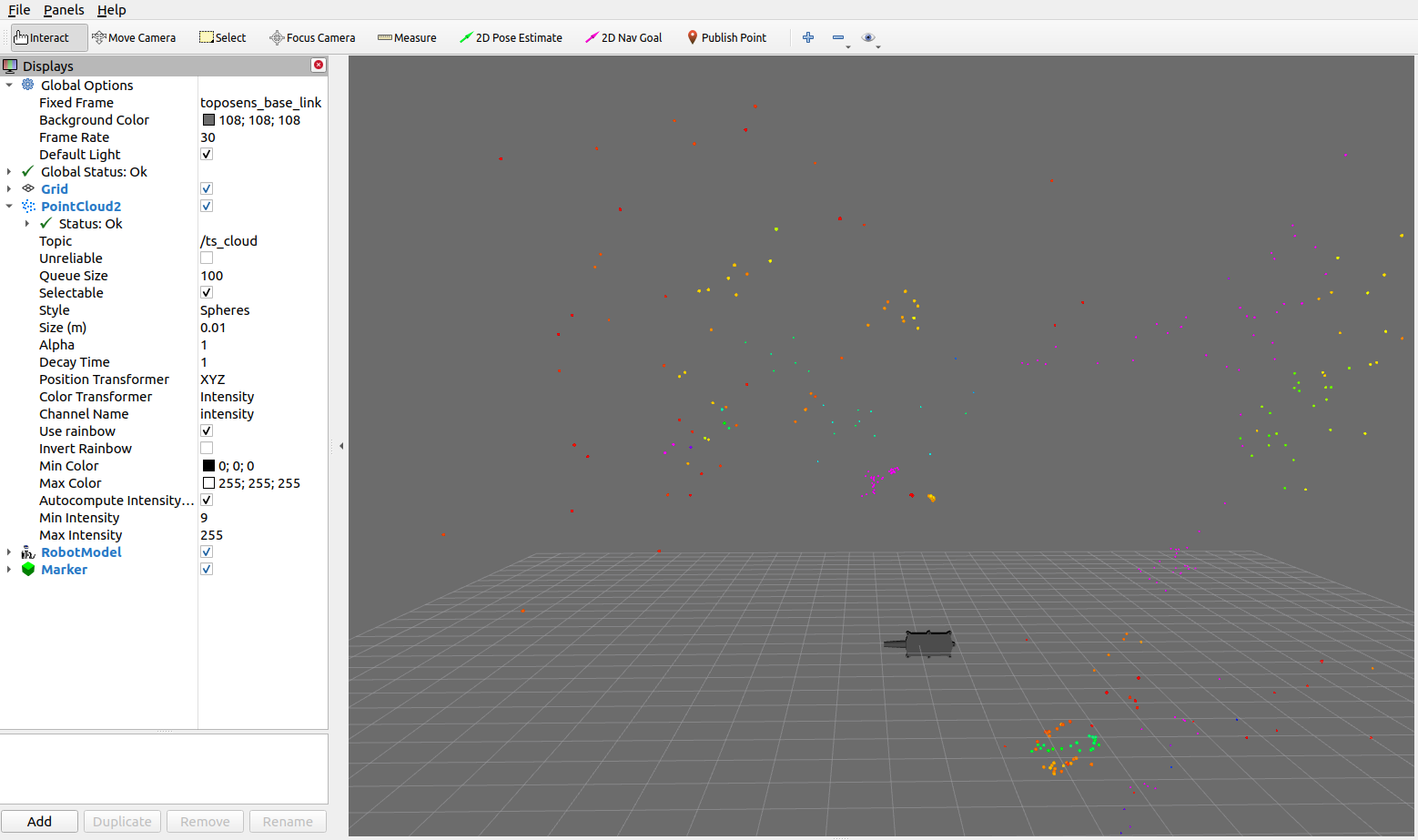 In order to visualize the surface normal vectors, run the launch-file with the corresponding argument: 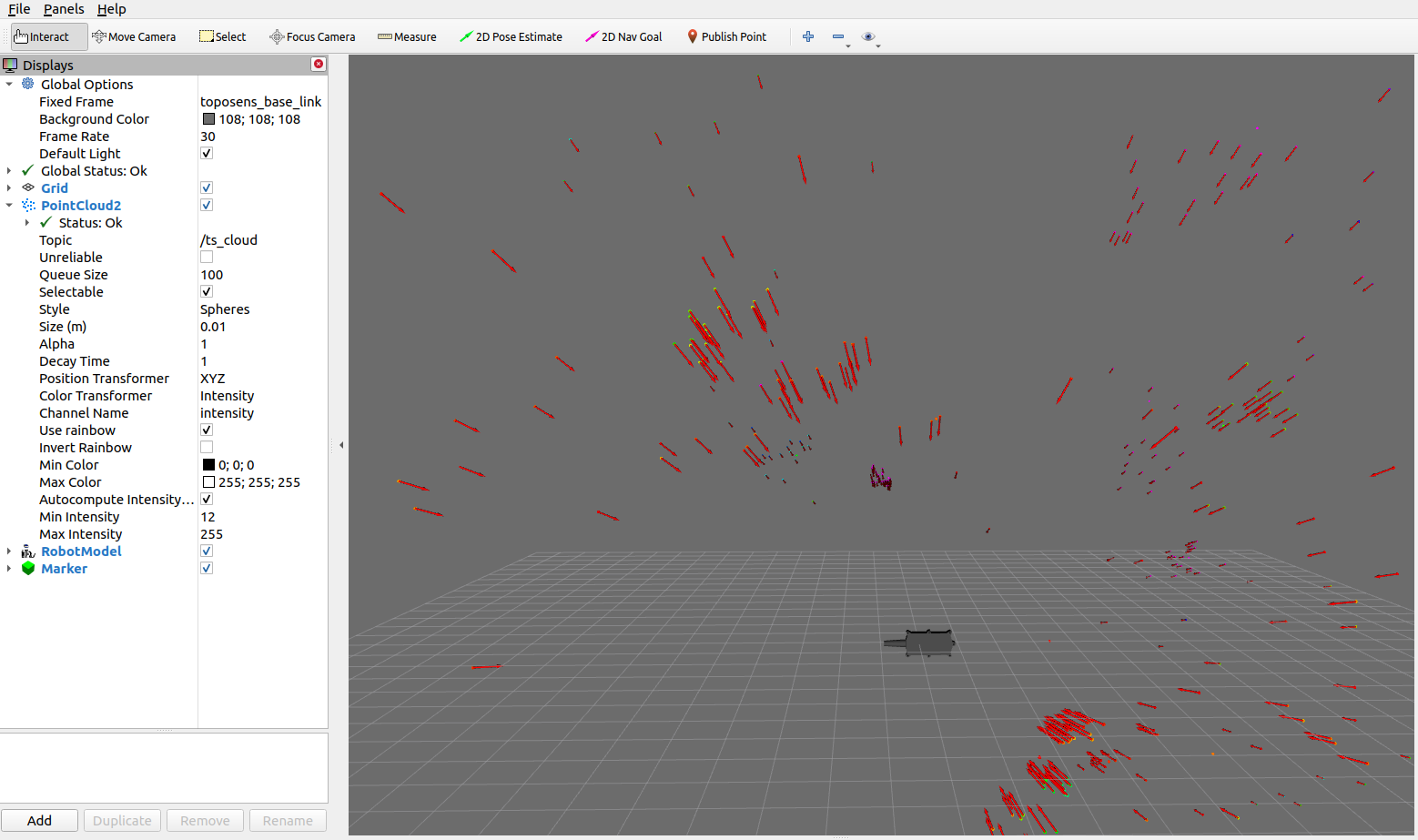 Be aware that in case of a static sensor (i.e. no tf information) the normal vectors are simply pointing towards the sensor at any time.

Make sure roscore and the toposens_echo_driver_node are running before launching the reconfigure gui (roscore is started when using one of the aforementioned roslaunch commands).

There are several parameters that can be dynamically reconfigured in the toposens_echo_driver_node.