This technical overview goes into greater detail about the implementation of ROS. Most ROS users do not need to know these details, but they are important for those wishing to write their own ROS client libraries or those wishing to integrate other systems with ROS.

This technical overview assumes that you are already familiar with the ROS system and its concepts. For example, the ROS conceptual overview provides an overview of the Computation Graph architecture, including the role of the ROS Master and nodes.

The Master is implemented via XMLRPC, which is a stateless, HTTP-based protocol. XMLRPC was chosen primarily because it is relatively lightweight, does not require a stateful connection, and has wide availability in a variety of programming languages. For example, in Python, you can start any Python interpreter and begin interacting with the ROS Master:

The Master has registration APIs, which allow nodes to register as publishers, subscribers, and service providers. The Master has a URI and is stored in the ROS_MASTER_URI environment variable. This URI corresponds to the host:port of the XML-RPC server it is running. By default, the Master will bind to port 11311.

Although the Parameter Server is actually part of the ROS Master, we discuss its API as a separate entity to enable separation in the future.

The XMLRPC API makes it very easy to integrate Parameter Server calls without even having to use a ROS client library. Assuming you have access to an XMLRPC client library, you can make calls directly. For example:

A ROS node has several APIs:

There are many ways to ship data around a network, and each has advantages and disadvantages, depending largely on the application. TCP is widely used because it provides a simple, reliable communication stream. TCP packets always arrive in order, and lost packets are resent until they arrive. While great for wired Ethernet networks, these features become bugs when the underlying network is a lossy WiFi or cell modem connection. In this situation, UDP is more appropriate. When multiple subscribers are grouped on a single subnet, it may be most efficient for the publisher to communicate with all of them simultaneously via UDP broadcast.

For these reasons, ROS does not commit to a single transport. Given a publisher URI, a subscribing node negotiates a connection, using the appropriate transport, with that publisher, via XMLRPC. The result of the negotiation is that the two nodes are connected, with messages streaming from publisher to subscriber.

Each transport has its own protocol for how the message data is exchanged. For example, using TCP, the negotiation would involve the publisher giving the subscriber the IP address and port on which to call connect. The subscriber then creates a TCP/IP socket to the specified address and port. The nodes exchange a Connection Header that includes information like the MD5 sum of the message type and the name of the topic, and then the publisher begins sending serialized message data directly over the socket.

To emphasize, nodes communicate directly with each other, over an appropriate transport mechanism. Data does not route through the master. Data is not sent via XMLRPC. The XMLRPC system is used only to negotiate connections for data.

In order to catch changes that occur in embedded message types, the MD5 text is concatenated with the MD5 text of each of the embedded types, in the order that they appear.

Putting it all together, the sequence by which two nodes begin exchanging messages is: 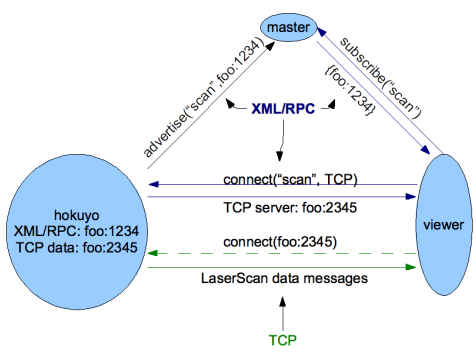 To control a Hokuyo laser range-finder, we start the hokuyo_node node, which talks to the laser and publishes sensor_msgs/LaserScan messages on the scan topic. To visualize the laser scan data, we start the rviz node and subscribe to the scan topic. After subscription, the rviz node begins receiving LaserScan messages, which it renders to the screen.

In the example above, how do the laser_viewer and hokuyo_node nodes find each other? They use a name service that is provided by a special node called the master. The Master has a well-known XMLRPC URI that is accessible to all nodes. Before publishing on a topic for the first time, a node advertises its intent to publish on that topic. This advertisement sends to the master, via XMLRPC, information about the publication, including the message type, the topic name, and the publishing node's URI. The master maintains this information in a publisher table.

Note: message data does not flow through the master. It only provides name service, connecting subscribers with publishers.

We have not discussed services as much in this overview, but they can be viewed as a simplified version of topics. Whereas topics can have many publishers, there can only be a single service provider. The most recent node to register with the master is considered the current service provider. This allows for a much simpler setup protocol -- in fact, a service client does not have to be a ROS node.

If the last several steps look familiar, its because they are an extension of the TCPROS protocol. In fact, rospy and roscpp both use the same TCP/IP server socket to receive both topic and service connections.

As there is no callback from the Master when a new service is registered, many client libraries provide a "wait for service" API method, that simply polls the Master until a service registration appears.

By default, service connections are stateless. For each call a client wishes to make, it repeats the steps of looking up the service on the Master and exchanging request/response data over a new connection.

The stateless approach is generally more robust as it allows a service node to be restarted, but this overhead can be high if frequent, repeated calls are made to the same service.