Training an ISM using the Combinatorial-Trainer

Description: This tutorial explains how the combinatorial trainer can be used to train an ISM from a recorded scene.

Next Tutorial: How to use the recognizer

ou need a recorded scene stored in a sqlite-database for this tutorial; see recorder tutorial on how to create one.

Before you can launch the trainer you will have to set the parameters of the application. At least this will be the path to the sqlite-database containing the recorded scene and the path to the output directory which will contains the trainer's results.

The files containing the parameters of the combinatorial trainer can be found in the launch-directory of the asr_ism package. Open the combinatorialTrainer.launch file and set the value of the outputDataPath parameter to the path of a directory you want to store your results in, e.g. "/home/username/comb_trainer_results/". Make sure this directory exists or the trainer will fail to execute.

Next go to the param-directory and open the sqlitedb.yaml file. Here you will need to set the path to the database your recorded scene is in; if you went through the SceneRecorder tutorial and want to use the database you created, you can use the same value as you did there. Otherwise set dbfilename to the correct path to your database (also make sure the parameter is uncommented or the trainer will fail).

Now you can start the application by using the following command:

If you set all parameters correctly the trainer should give you a console output similar to the following: 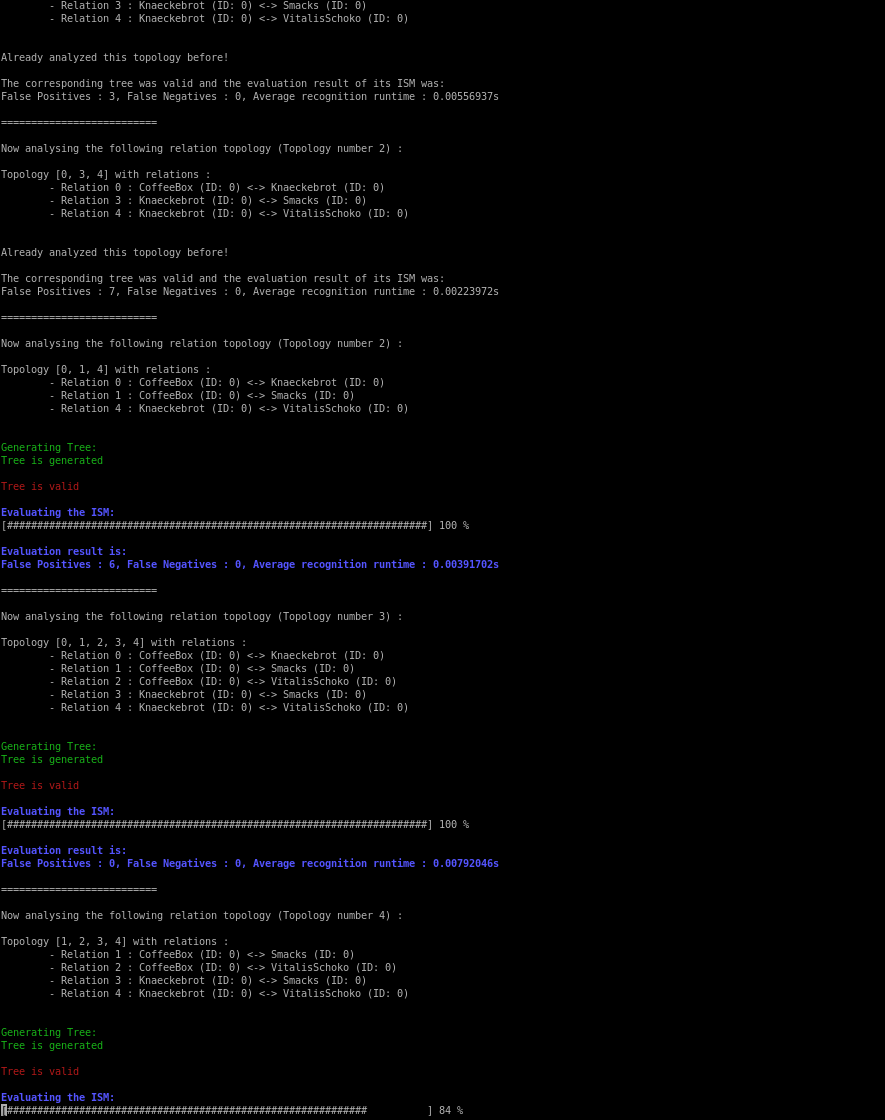 Wait until the trainer is done and the application exits, then you can use the trained model which can be found in the SQL-subdirectory of the output-directory you set before. The name of it should be optimized.sqlite.

The section before described how a model is trained using the default parameters. For advanced users the application offers a list of parameters to influence the training further. The documentation for all of them can be found in the combinatorialTrainer.launch file (they can be set there as well) or here, this section gives a short overview of the most important ones:

As the search for an optimal topology can be seen as a combinatorial problem, the algorithms this trainer uses fall into this category. More specifically this application offers three algorithms the user can make use of to solve this problem by adjusting the optimizationAlgorithmId parameter:

In each optimization round (starting with a generated or manually chosen start topology) the trainer generates neighbor topologies of the current best one by either adding a relation between objects, removing one (can be turned off with removeRelations) or swapping one relation (can be turned off with swapRelations), then it chooses the optimal one depending on the optimization algorithm and a cost function which is a weighted sum of the average runtime of this topology (evaluated with a generated or provided test set) and the false positives of it. The weights for this sum can be tuned by setting the parameters alpha and beta.

For further evaluation the start-topology and fully-meshed one can be stored in addition to the resulting optimized one by setting the parameters storeStartTopologyISM and storeFullyMeshedISM.

The application generates several output files which are grouped in subdirectories in your output directory: