If this node is started as a service the current pattern can be changed by other nodes via service calls, what is required for running the adjust_exposure or the blur_estimation node. The patterns can also be changed within the terminal with "rosservice call change_pattern <pattern_index> <block_size>" (0 = black, 1 = white, 2 = block, 3 = stripe, 4 = random, >4 = patterns from textfiles)

If the node is not started as a service, the pattern can be changed with the keyboard:

In most cases, it is more useful to use the launch file, which enables to project the pattern on another screen device.

Adjust the exposure time so that the average brightness of the area illuminated by the projector is set to a fixed value (default 120) to avoid overexposing that region.

Default namespace for the camera parameters is "/stereo/stereodcam2701/" for the videre camera. That can also be overwritten by calling:

If auto-exposure is activated for the camera, that must be deactivated manually before running the node, for example with the reconfigure_gui: 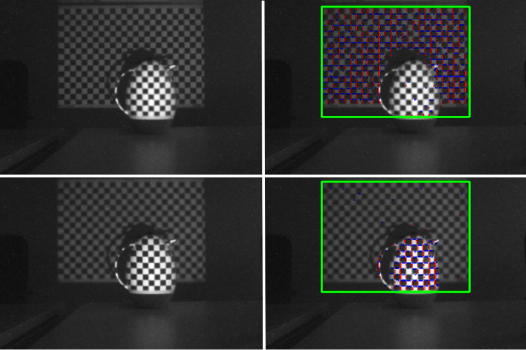 Takes one model_point cloud and a folder with measured point clouds and compares each with the model. For each subfolder the average and the standard deviation is computed for the given compare mode.

Camera driver for the videre stereo camera, just modified not to show the disparity view by default. Disparity view can be shown by calling:

Runs the create_pattern node and shows the pattern on the display, that was specified. Per default the node is started not as a service, this can be done by calling: