Description: This provides a brief overview of the modelica_bridge package, and an introductory explanation on usage.

modelica_bridge has been released for Ubuntu - to download the binary, paste and run the following command in the terminal:

To alternatively build from source, cd to the source subdirectory of your catkin workspace in terminal and run the following command:

In order to use modelica_bridge effectively, it must used alongside its partner package in Modelica, the ROS_Bridge package. Download this from source:

The joint purpose of the modelica_bridge and ROS_Bridge packages is to provide interfaces to connect Modelica tools with the ROS system during simulation. The communication between Modelica and ROS is accomplished via TCP sockets; the ROS node runs the service socket, and the Modelica tool the client socket. This is separate from the actual model and control architecture - the interfaces are packaged as standalone components (a block in Modelica, and a node in ROS). This has two implications:

Separately, it is important to note that as the current version of modelica_bridge uses TCP sockets, and as ROS runs the server socket, the ROS interface node may require a SIGTERM to halt. This is because TCP server sockets generally listen for some time after connections have been closed, to ensure that there has been no queued up and waiting data; it does not affect the system at large, and so should not be a cause of concern.

Like any other ROS node, start the interface node via the following command (after starting the ROS Core):

As previously mentioned, the modbridge_node (the interface node) has two parameters: port_num_ and update_rate_. Set these via a launch file, or using the normal CLI commands. For more information about them, refer to the wiki. modbridge_node publishes the model's feedback to the topic /feedback_values, and takes input from the ROS system by reading from topic /control_values.

For a general idea on how to use the complement ROS_Sampler block in ROS_Bridge, view the example below.

Within the ROS_Bridge Modelica package is an example called the TwoSpringDamperJoytickControl.mo model. This model uses a joystick, read by ROS's joy_node, to set the desired steady-state positions of the two springs, via a proportional control mechanism implemented in ROS. The communication is done via modbridge_node. The following assumes one is comfortable using the joy_node of the joy package - visit the wiki first otherwise.

In order to run this example model, one requires the ROS node architecture - this is available in a separate package, known as modelica_bridge_examples. Currently, it is only possible to build from source, via the following code:

Build with catkin_make as usual.

Within modelica_bridge_examples are the nodes for running the ROS system along with the Modelica model - the nodes and launch file to provide the input to the entire spring-damper system. Looking at the model itself, pictured below, it is constructed from the Modelica Standard Library (version 3.2.2), consisting of the spring-damper and mass components of the Mechanical.Translational sub-package. Each mass, mounted to a spring, is subject to an external force; this force serves as the driving force that settles the position of the mass. The magnitude of the force is given by the output of a control block, and the input of said block are the positions of the masses. 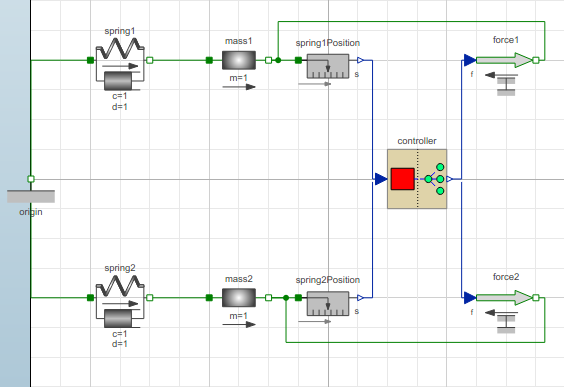 This control block is the ROS_Sampler interface block provided by the ROS_Bridge Modelica package. The parameters of the block are shown in the image below - they consist of the number of inputs and outputs, nin and nout; the samplePeriod and the startTime of the sampling function; and the portNumber and hostName of the ROS server socket.

The values of nin and nout are important. The modbridge_node does not limit the number of control values sent from ROS to what is desired by the model; instead, it is the sampling block ROS_Sampler that does so. When the number of incoming values is too high, it will only read nout number of values; if the number is too low, it will zero-pad or last-provided-value-pad the control input to nout - number of incoming ROS input values, such that the model receives the nout values required.

Furthermore, samplePeriod represents the amount of simulation time to occur between each sample period. Because it is likely the simulation time of the model will not match the machine time (real time), it's highly recommended to run the model in real-time, with fixed solver step sizes.

Before simulating the example, the ROS architecture, provided by modelica_bridge_examples, must be started, otherwise a port-binding error will occur. Do so by running roslaunch modelica_bridge_examples two_springs_example.launch in the terminal. This will start the ROS core, the modbridge_node, two extra nodes for dictating control and input to the model, and the joy_node. Visualizing the node network produces this image:

The flow of information through the system is as follows:

Running rostopic echo /control_values shows that all 8 axes of the joystick, a different control value is being produced. However, only two values are being published on the /feedback_values topic; furthermore, the simulation log from the Modelica tool will only indicate 2 values being read. This is a result of what was said earlier - the ROS_Sampler block will only read nout values; since the default value of nout is 2, only two will be read.

As a separate trial, add another identical spring-damper system to the model, increase the values of nin and nout to 3, and connect the model together - the control block should start reading the third incoming value.

For more information, visit the wiki. If you'd like to add to the modelica_bridge_examples package, open a pull request here; add your associated Modelica code here.