Learn the basics of openai_ros using a Turtlebot2 simulation.

Description: This tutorial will introduce you to openai_ros by making turtlebot2 simulation learn how to navigate a simple maze.

Let's make a Turtlebot 2 robot learn to move without colliding in a simple maze.

You can do it in two ways:

In order for the training script to work, you also need to download and compile the openai_ros package, because it is using an openai_ros TaskEnvironment to do the job (learn more about TaskEnvironments below).

The training environments are the Python classes provided by the openai_ros package.

As I've said before, the Gazebo Environment is mainly used to connect the simulated environment to the Gazebo simulator.

The code for this class is inside the robot_gazebo_env.py of the openai_ros package.

You have to do nothing here. This class is already embedded in the RobotEnvironment of the Turtlebot 2.

The robot environment will then contain all the functions associated to the specific robot that you want to train. This means, it will contain all the ROS functionalities that your robot will need in order to be controlled.

In the Turtlebot 2 example, this is handled by the class TurtleBot2Env defined in the turtlebot2_env.py file of the openai_ros package.

Again, you have to do nothing here, because the openai_ros package already provides you the RobotEnvironment for the Turtlebot 2. We are going to use that class in the TaskEnvironment.

The task environment class provides all the context for the task we want the robot to learn. It depends on the task and on the robot!!.

In our Turtlebot2 in the maze example, the task environment class is created in the turtlebot2_maze.py file.

The purpose of this training script is:

* select the task and robot to be used

Let's do an example

a) Go to your catkin_ws/src directory, and create the package called my_turtlebot2_training.

Create a Python file named start_training.py inside the src directory of the package with the following code:

As you can see on the Python program, you are creating the Reinforcement Learning training loop, and you are using a Qlearn RL algorithm to train.

The code of Qlearning is provided by the code of the following file:

Go to your src directory, create a file named qlearn.py and paste the code of that file link into it.

b) Inside the package, create a new folder called config and create a new file inside it, named my_turtlebot2_maze_params.yaml. Put the following code on it

c) Create a launch folder. Inside the launch folder, create a new file named start_training.launch. You can copy the following contents into it:

Now you are ready to launch the training code:

Let's also check how the reward is advancing. The openai_ros package automatically provides a topic that contains the reward obtained by each episode. The topic is called /openai/reward and you can plot it to obtain something like this: 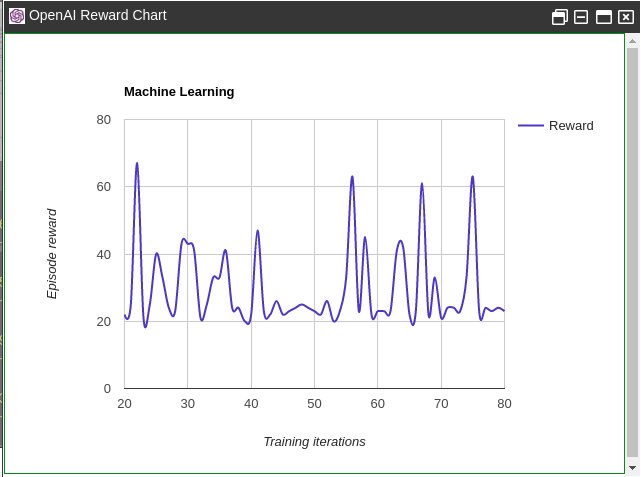 Exercise for home: change the Q-learn algorithm by the Sarsa algorithm (code provided in a separated file named sarsa.py), and check which one produces better results.

IMPORTANT POINT If you only want to concentrate on creating RL algorithms for training robots in already defined tasks, then you only need to concentrate on creating your learning algorithm on a Python file and then use an already existing environment. Use the start_training.py script below and modify the learning algorithm and select the environment you want. You don't need to do anythig else.

If you want to specify your own tasks or your own robots to solve the task, then you need to learn how to create Training Environments.

Create Your Own AIScript , Task or Robot Environment

Depending on what you want to do, create your own RL script, Task , or Robot Environment you will have to edit in one place or another. Lets divide it into three possible scenarios:

This will be the most common scenario if you find that one of the already existing tasks suits your needs.

For example, lets take the MyTurtleBot2Maze-v0.

And that's it. If you execute the script and load the parameters into the param server, you the world and robot appropriate for the Task 'MyTurtleBot2Maze-v0' should be launched in gazebo.

There is this exact example here:start_training_maze_v2.launch

So you like the robots you find supported in openai_ros, but you want to train them to do another task.

I want to create my own Robot Environment

Ok so you have the AI RL script, the Task but you need another robot instead. These are the steps:

We want OpenAI-ROS to be bigger and bigger each day, with support for more and more robots and tasks. So just 'fork' the openai_ros repo, branch version2 and place a pull request. We will process it ASAP. If for the contrary you want to create examples of Deep learning for the different tasks already available, follow the same procedure in the openai_examples_projects

The openai_ros package allows to clearly separate the different aspects of a Reinforcement Learning training for robots using ROS.