Description: Implement a pick and place application and learn to program a simple application with the Python API.

In the previous tutorial you learned how to read robot positions and wrote your first python script to move the robot.

To implement an application you stick multiple such commands together in branches or loops. This tutorial guides you through this process and shows how to move the robot in the tcp coordinate frame and to structure your script file.

So, in the end, you have an application in your virtual environment in which the robot moves in a continuous cycle between different positions in a Python script.

You can also control a real robot manipulator with the same procedure, but we limit this tutorial to a virtual environment. In a later tutorial, we will show you how to do it with a real robot.

You need to have the following prerequisites:

To continue from last tutorial Program your robot with the Python API launch the application again:

As an example, we now continue to program our simple pick and place trajectory. The robot shall move to one side, pick up an imaginary part and then moves to another point. There it inserts the imaginary workpiece into an imaginary machine, waits, and takes it out again. It then moves to the place point and makes the place movement. These functions are called sequentially in an endless loop. So the program flow will look like the following. 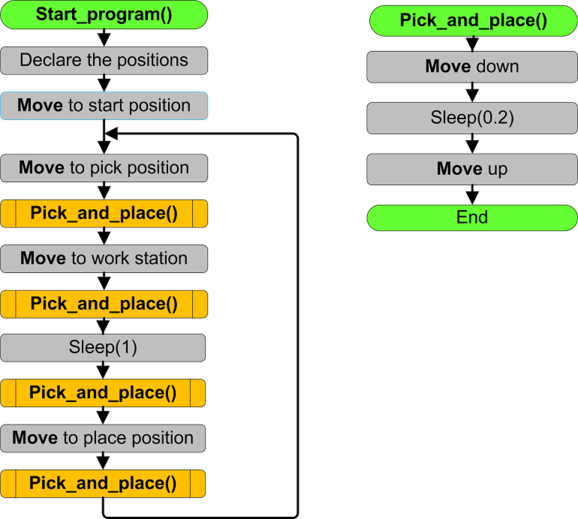 First, we will program the pick_and_place function based on the previous Python file. Then we can write our main positions in the start sequence. Afterwards, we simply write the program flow into an endless loop. You can try out your program after every step, to see if your code works and fine-tune the positions.

Reminder: To start the program use

while the launchfile is running.

Now you have to modify and implement the move-commands in a pick_and_place() function. Therefore, you implement a function in which the robot moves relative to the tcp down, and moves up again. So in the main program, you only have to call this function to do the pick and place movement.

First of all implement the function pick_and_place() in your program. There we add the move commands. Currently, we don't have a gripper mounted at the arm, so instead of opening and closing the gripper we will sleep for 0.2 seconds (and the PNOZ modelled in the application won't move):

The robot moves 0.1 (10 cm) down, and then 0.1 up in the coordinate system of the tcp prbt_tcp. In whatever position the robot is standing, the pick_and_place() function always moves in direction of the tcp.

If you want to create your own reference frame, you can look the commands for it up in the pilz_robot_programming’s documentation. You can also move absolute, of course, but for pick-and-place prbt_tcp is the correct coordinate system.

To try your program just call the function in the main function start_program(). Make sure that the positions of the robot allows a down and up movement without a collision.

You did all preparations to develop the remaining program now. So teach the robot now as learned in the previous tutorial.

Replace the content of the start_program function with the following:

If you need help for the commands, visit pilz_robot_programming’s documentation.

Now we can start the main program sequence.

The main program runs in an endless loop moving the robot infinitely.

Therefore, we simply alternate between moving to a point and then call the pick_and_place() function we developed. The result should look similar to the following code:

If we now run the program, the robot should move as specified from one point to another. At each point, it should do an up-down-movement to pick the PNOZ. This all will be done in an endless loop so the program won't stop if you don't stop it.

You can find the final Python script at GitHub/myFirstApplication.py for reference.

At last, we present you some helpful tips and tricks. They are not necessary for this tutorial, but if you have any issues you can read it through. This might help you to solve common bugs or general mistakes. This chapter is sectioned in runtime tools, debugging and common mistake description.

If any errors are occurring, have a look at the terminals and read the error messages. If you started the robot (launch file) and your python script (*.py) in separate terminals, you can debug your program easier. The reason is that the terminal where you started your script shows all the Python errors. Furthermore, it also shows in which line of your program the error occurs, to simplify the debugging process.

On the other hand, the terminal in which you started the robot shows all the errors from the robot. For example, if you collide with the wall or have a cable rupture.

But errors if for example the kinematic solution can not be found will be shown in both terminals. So if you want to find the reason why your robot stopped or did unexpected things, you better check both terminals for errors.

You can write a console log, too if you want to know until which point your program is executed. Therefore use for different priorities:

In this tutorial, you have learned, how to control the robot with the Python API. Therefore, you can now write your own program moving the Pilz Manipulator Module PRBT. If you want to learn more commands with the Python API, you should check out the pilz_robot_programming’s documentation.