Realuex is a basic package for Robot Reachability and Base Placement. It provides tools for creating various types of robot reachability maps and finding optimal base locations for a given task specified by poses through those reachability maps.

Inside you catkin workspace clone the Reuleaux package. Navigate to your existing src folder for workspace:

Setting everything up for your robot

Reuleux is highly dependent of ikfast package which can be obtained from http://openrave.org/. All the Inverse Kinematics solutions of the workspace are obtained by ikfast. There is a detailed instruction on how to create ikfast solver from urdf here http://docs.ros.org/indigo/api/moveit_ikfast/html/doc/ikfast_tutorial.html. You can obtain moveit_ikfast from here: https://github.com/ros-planning/moveit_ikfast.git .

To install openrave in ubuntu please follow these commands:

If you have only xacro file for your robot, it can be easily changed to urdf by

When you have the urdf file for your robot, run

where <myrobot_name> is the name of your robot. There is a script in moveit_ikfast package which rounds all the numbers to a fixed decimal places in the dae file. If the default dae file takes long time for generating Ikfast solution, it is encouraged to round up the numbers to 5 decimal places or lower.

To see the links in the newly generated Collada file

To test the newly generated robot in Openrave

You need the link index numbers for the base_link and end_lin between which Ik would be calculated. By running this command you can count the number of links from a model:

Setting up Kinematics for the robot

Now as you already have an ikfast file for you robot, we can link it to reuleaux. copy your ikfast solution file and paste it in the map_creator/include folder:

Note you may also need to copy header files that your *.cpp includes.

After copying the file, we have to link it in the map_creator/include/map_creator/kinematics.h header file and block the previuos defined filename (in the case in the link, "mh5_ikfast.cpp"). You have to have at least a single ikfast mentioned in the header, otherwise the package won't build.

(please do not put more than 1 ikfast filename here, otherwise the system will generate error). Saving the kinematics.h file, go to your catkin workspace and run catkin_make once:

The most difficult part is done. Now you can start creating workspace maps and visualizing them.

Now as the kinematics is set up for reauleaux, we can start creating reachability maps for the robot. Reuleaux map_creator package creates three types of maps. (You don’t have to create all the maps, it is per your needs):

To create a reachability map, run:

The ouput map file will also be stored in map_creator/maps folder. ( As for all the outer spheres, the algorithm tries to fit different opening angles, the generation process of capability map may take upto hours with low resolution)

Here provided reachability map is of motoman_mh5 robot and resolution is 0.08. The outout of inverse reachability map will be stored in map_creator/Inv_map folder unless specified otherwise.

(OK.Enough of the maps. Lets go and visualize the created map)

To visualize the created maps from section 4, First in a terminal start rviz:

Add a new display. Find the workspace_visualization tab (most probably at the lower section). Add a reachability panel. Set the topic to /reachability_map

In a second terminal load the map file(load any one map at a single time, otherwise it may lock up the system).

The map may take some time to show up. The load_reachability_map commands run through the whole database file, searches for all the spheres and associated poses and then renders them. When the map shows up, the whole workspace would most likely show up as sphere with variation of colors ranging from blue to red. The blue spheres are indicating the most reachable sections in the workspace, while the red ones are sections where the robot can hardly reach (mostly in the outer spheres).

If you dont like the colors, you can change it by checking the box checkbox "color by reachability"

By checking the "show poses" checkbox , you can visualize all the reachable poses by arrows. But the poses can be upto 8 digits, so the system may lock up.

You can also disect the workspace, if you want to visualize the inner spheres of the workspace. It can be done by changing the values in disect drop down arrow.

There are no poses section in the capability map. Only the spheres will be visualized.

Sometimes the changes in the visualization of the maps do not instantly take action. Pressing the reset button will bring back changes.

The base placement plugin finds optimal base locations for the robot for a given task. A task can be defined by several task poses.

To start base placement plugin, start by running rviz

Upto this point an interactive marker should show up with a red arrow. The red marker is at the origin. You can drag it to your desired location. While you are dragging the position of the marker will change in the Task Poses window. You can also change the orientation by using the 6-DOF marker control.

If you do not want this task pose, you can delete it by indicating its number and press the remove pose button. Also a new pose can be added by indicating its position and orientation by changing the values and pressing the add point button.

A task of several task poses can be saved by the save task button. A saved task can also be loaded by load task button. 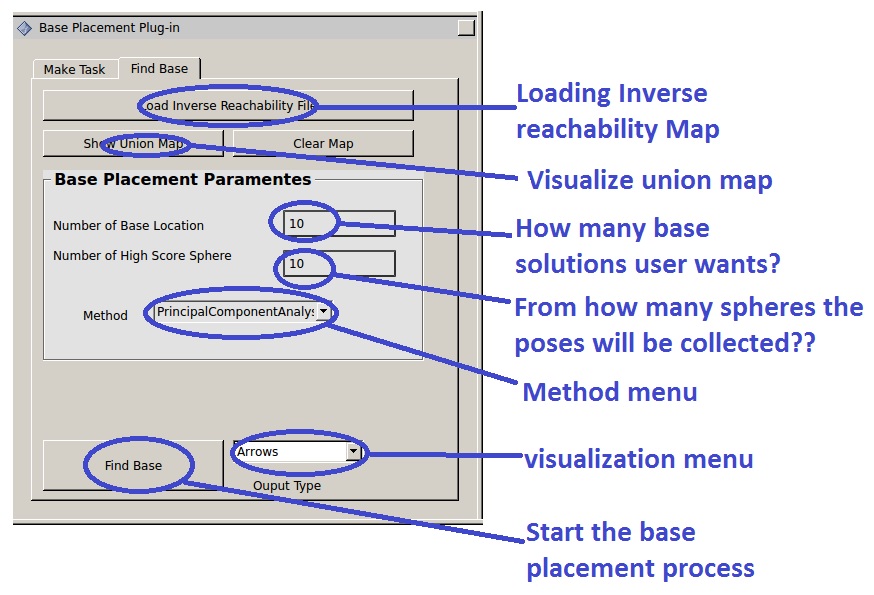 It also creates an union map based on the inverse reachability solution of all the grasp poses. To visualize the union map press the show union map button.

To search for only robot arm base, there are 3 base placement methods which can be changed by the dropdown arrow in the method menu.

When all the parametes are setup. Press the Find Base button which will find optimal base locations for the given task.Based on your selected visualization output, the output can be shown as an arrow or robot manipulator.

Find Robot Base Locations on the Ground

To search for robot bases, the VerticalRobotModel method can be used. It slices up the newly created union map at the ground and searches for the spheres that has the highest inverse reachability index. The visualization should be only the robot model or the arrows, not the manipulator.

The husky robot with an UR5 arm. Two base locations are searched for 3 task poses(magenta arrow). The manipulator configurations from the the left robot model(green) are :a)Dark green, b)green c)white and from the right robot model(blue) are:1)Dark blue, 2)blue 3)pink

There is also a fun method called userIntuition method, where the user can challenge their own intuition of placing base with the algorithms in Reuleaux. Go crazy.

If you like this package and want to use Reuleaux in your work, Please cite our arXiv paper: