Stack of packages related to the RoboFrameNet project.

To checkout, move to a directory within the ROS package path, then:

To run a test suite that is executable on a desktop:

Demo commands can now be sent to the system:

Speak should play a mooing sound over the speakers. Ping displays "Ping!" in the terminal. Loop displays "Loop [n]." in the same way; however, instead of terminating, it simply counts upwards and waits to be preempted. Stop does nothing on its own but can take advantage of the preemption offered by the executor to preempt and thus halt the previously-running program. (This can be used, for instance, to halt Loop.)

RoboFrameNet grounds natural language in robot actions through a processing pipeline. An illustration of this process is below: 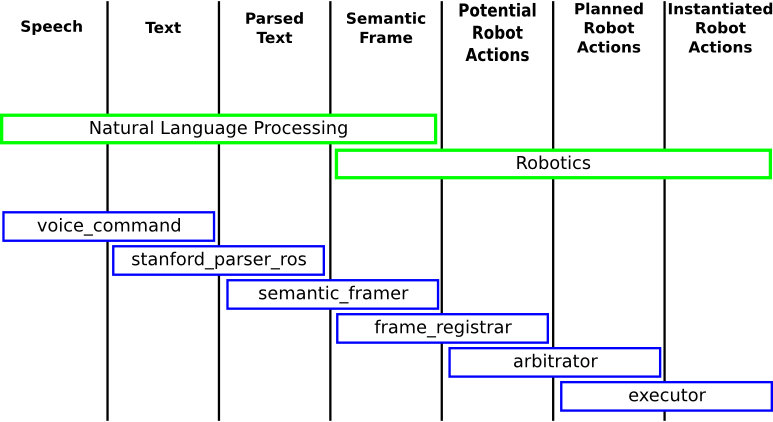 In the development of RoboFrameNet, many pieces of terminology were borrowed from FrameNet. The most pertinent ones are defined below, in terms of how they are used in the RoboFrameNet project. (This may differ slightly from their use in FrameNet.)

You can also run launches specially designed for the PR2:

as well as a Turtlebot:

RFNServer was developed to enable users to quickly integrate their work with RoboFrameNet. Please see the RFNServer package for more details.