FORTERC_driver is a ROS driver for the FORTE-RC platform, implemented on the Arduino board. It deals with the omnidirectional kinematics, motor controllers and ultrasonic sensor readings. FORTERC_driver benefits from rosserial_arduino to publish and subscribe topics to the high-level layer.

Turn ON FORTE-RC and connect to its internal CPU (take a look here to know how to do so). Once FORTE-RC starts, simply run:

script, from forte_rc_robot/scripts folder. Or it is possible to launch it step-by-step description of how to start FORTERC_driver normal mode of operation is presented next.

To launch the serial bridge between the pc NUC and the ForteRC driver (Arduino Mega) and the 2 Hokuyo lasers:

Also if is necessary teleoperation with the wiimote, simply launch:

To check if FORTERC_driver is on its normal mode of operation (i.e., publishing/subscribing topics through streaming mode), run check the topics published by the Arduino and echo the sonar readings as:

The communication between the low-level (Arduino MEGA ADK ) and high-level (Intel NUC NUC5i5RYH) layers is made entirely via serial, as depicted above.

The ping-pong communication is mainly used for debugging. It allows the user to test specific features of FORTE-RC, such as reading the ultrasonic sensors and the encoders, or even move the platform on a predefined path. Yet, the most relevant ping-pong commands are the ones that allow to start and stop the streaming process, which, on the other hand, enables the publish-subscribe ROS architecture on the Arduino board through rosserial_arduino.

All commands between CPU (NUC) and Arduino (uC) are sent and received in ASCII, starting with the '@' character and ending with the 'e' character. Note that some of the commands do not return any answer (NA). Next table presents all ping-pong commands implemented to date. 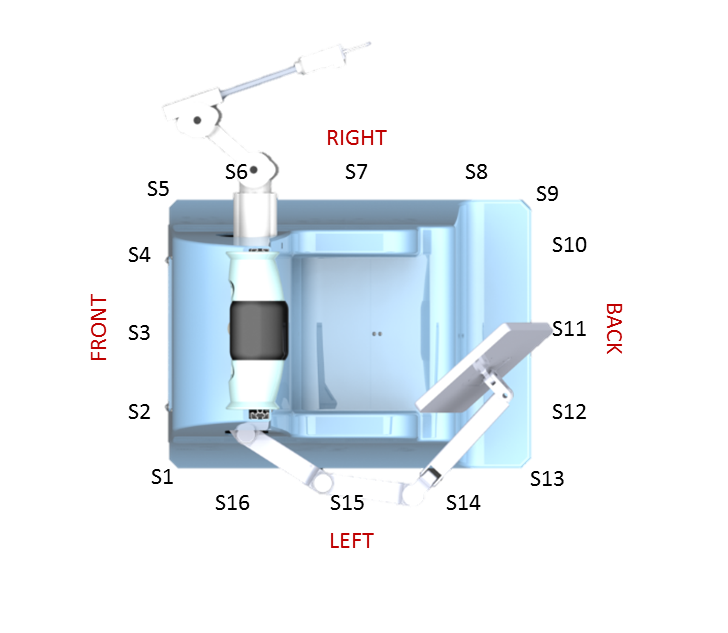 As opposed to the ping-pong protocol exclusively designed for debugging and sporadic communication, the streaming protocol is required to keep a systematic communication with the ROS layer. To that end, the streaming benefits from rosserial_arduino to publish and subscribe topics. This is the core of the FORTERC_driver as it essentially connects FORTE-RC to the ROS framework. Although systematic, the streaming is aperiodic, i.e., some topics are published/subscribed whenever the data is ready, while some others are published/subscribed periodically. Yet, as a "safeguard mechanism", the timestamp from the high-level layer will be constantly monitored by the low-level layer, so as to ensure that the connection is well-established between both layers. Whenever the timestamp freezes for more than 500 milliseconds, FORTE-RC enters in the emergency mode state. Under the streaming protocol, the ROS-Arduino exchange the following messages.