A simple robot drive system that includes skid steering joystick teleoperation, control of a panning servo to look around the robot, and Arduino firmware. 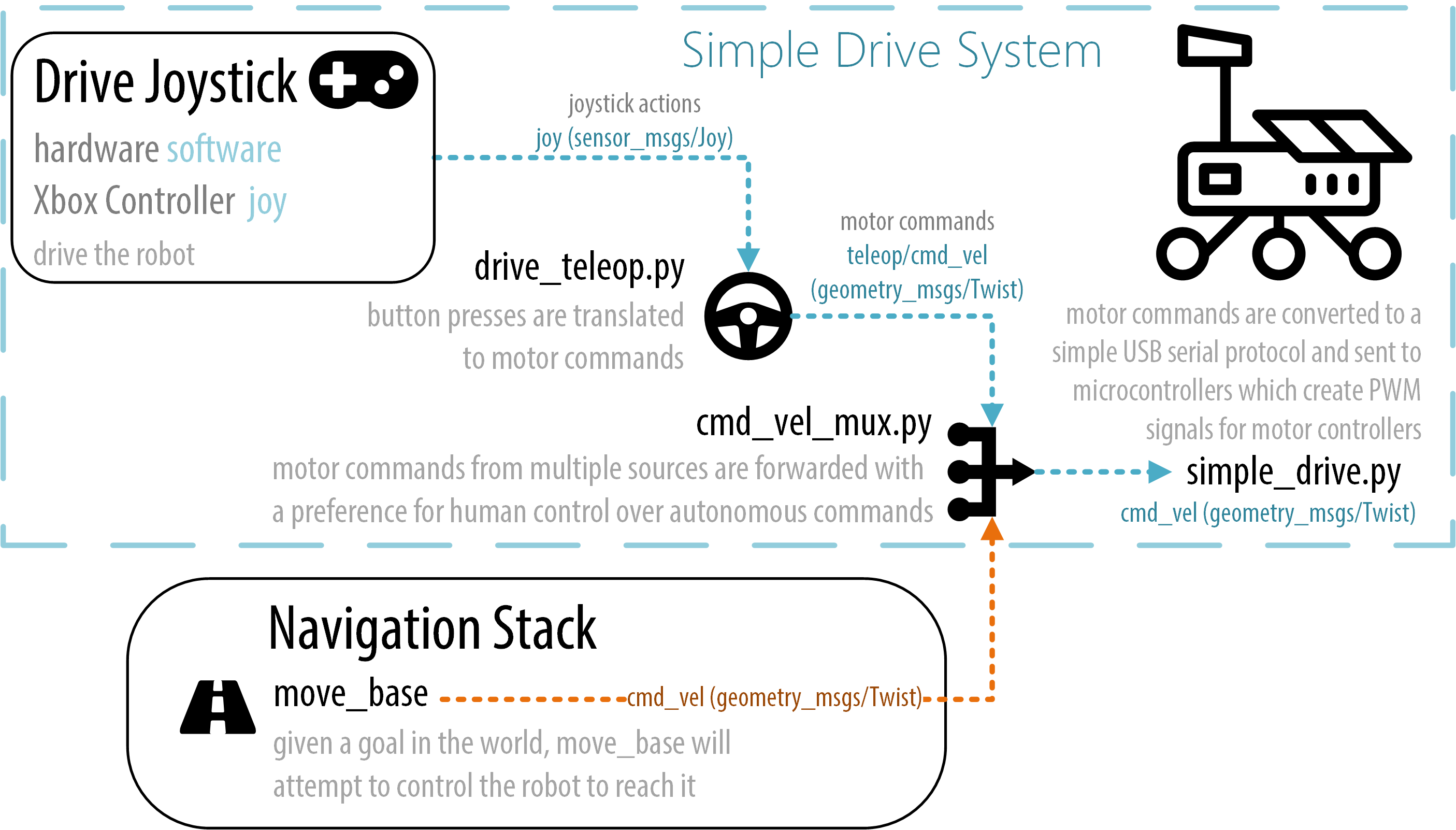 This package does not do the following:

This package is divided into four parts: 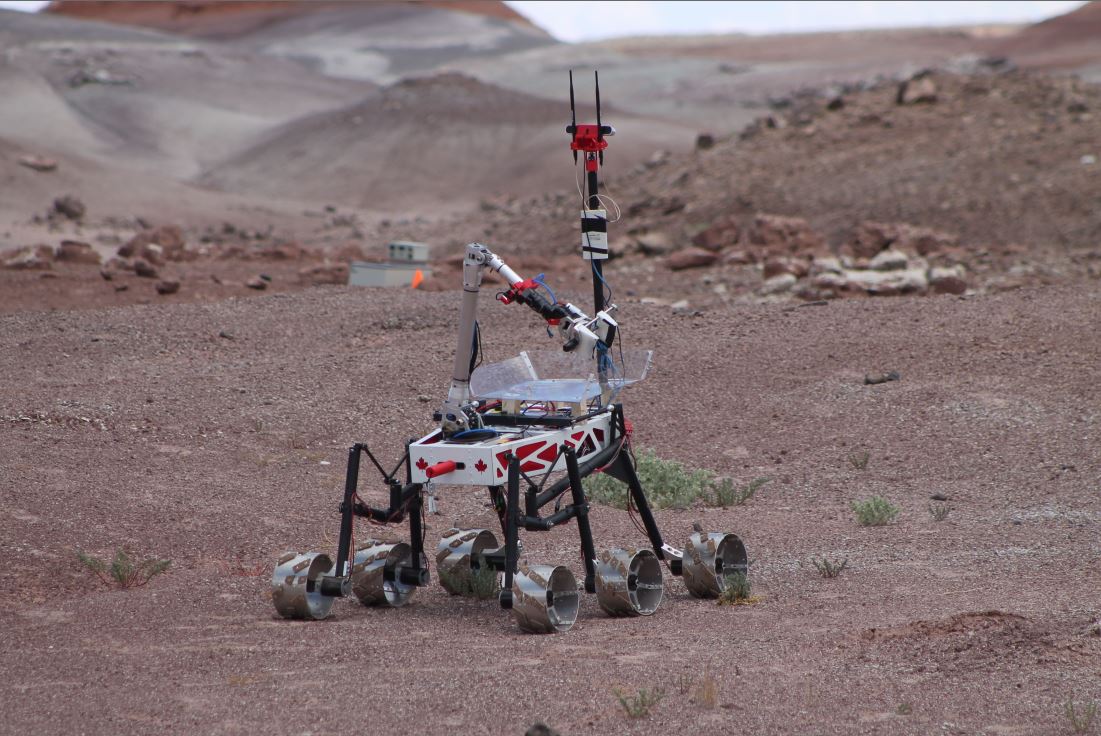 4. Drive your robot around. 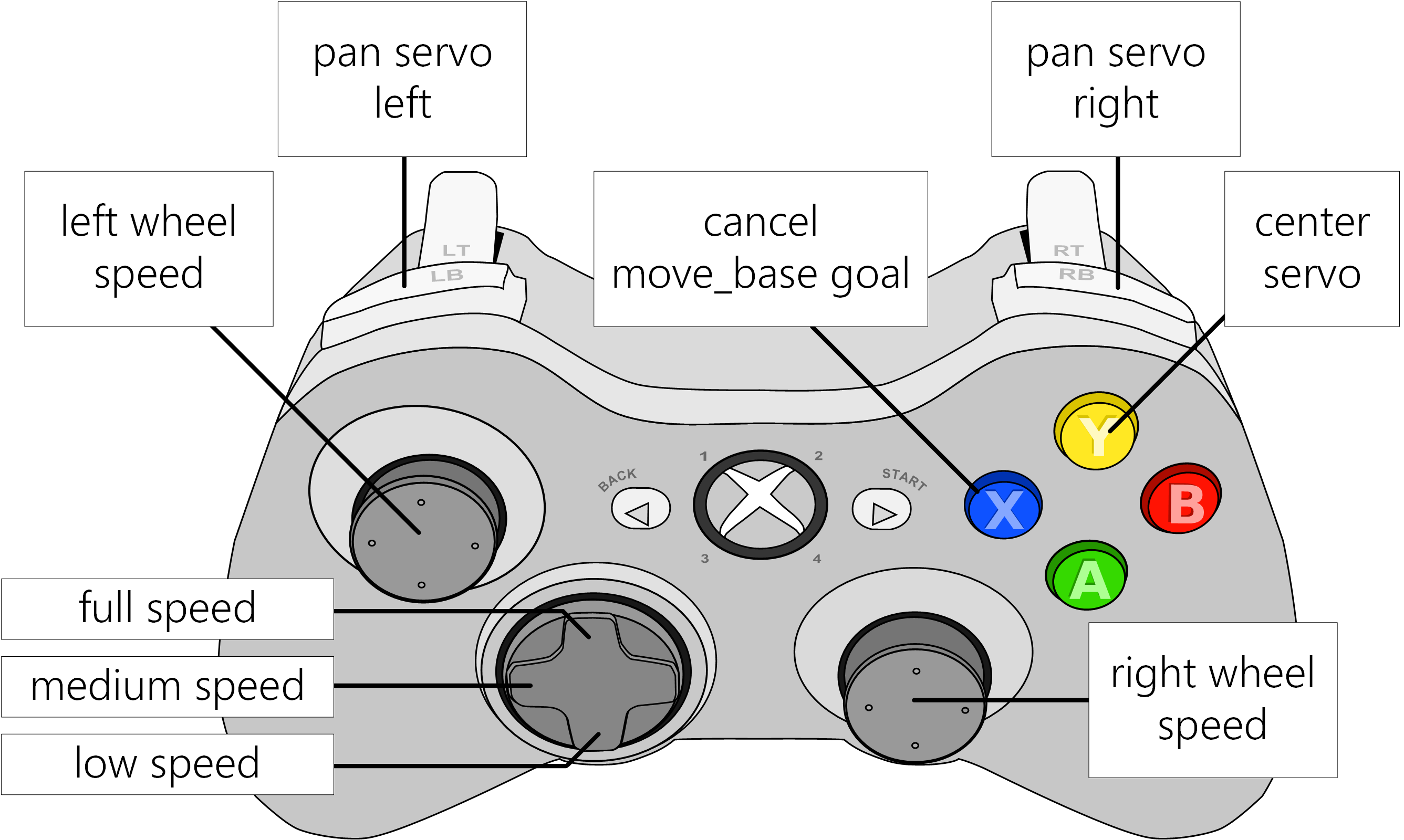 This diagram is also available in Visio format.

This node converts sensor_msgs/Joy messages from the joy node into a variety of commands to drive the robot at low, medium, and high speed, look around with a servo, and cancel move_base goals at any moment. This node simply sends commands to other nodes. Typically the servo is used to move a camera so that the teleoperator can look around the robot.

The button mapping was tested on an Xbox 360 controller and should require little or no modification for similar controllers.

This node communicates with the drive_firmware using a custom serial protocol described below. An example serial data packet could be 0,0.5,0.5 which would mean drive motors forward at half speed and rotate at half speed.

If your microcontroller supports subscribing to ROS twist messages (Arduinos can use rosserial_arduino) then it would be simpler to do that and skip this node. However, this node is written in python so you could more easily add complex functionality in python and then in your microcontroller do the minimum amount of work necessary.

The drive_firmware microcontroller code does the minimum amount of work possible to receive motor commands from a USB serial connection and output voltages to digital PWM output to be received by motor controllers.

We connected an Arduino by USB serial to our main robot computer. We tested on a Arduino Mega 2560 and Arduino Due, however many other boards should work with the same code and setup steps thanks to PlatformIO. You may need to change to change the pin numbers.

Caution! This software does not stop moving the robot if no messages are received for certain period of time. A pull request for this is very welcome.

We deploy the drive_firmware to an Arduino microcontroller using PlatformIO.

Depending on how you want to wire your microcontroller this wiring could be changed:

When a left and right joystick inputs are received by the drive_teleop node, representing left and right wheel velocities (ie. skid steering or differential drive), a geometry_msgs/Twist with linear and rotational velocities is calculated as:

When a geometry_msgs/Twist containing linear and rotational velocities is received by the drive_firmware, wheel velocities are calculated as:

http://wiki.ros.org/differential_drive - Differential drive software with support for a velocity PID target, a small GUI to control the robot, and more.

http://wiki.ros.org/diff_drive_controller - Differential drive software that is real-time safe, integrates with ros_control, and more.

http://wiki.ros.org/twist_mux - Multiplex several velocity command topics with prioritization or disabling according to a configuration file.

Feature requests, bug reports, and contributions are welcome at https://github.com/danielsnider/simple_drive.

Special thanks to anyone who sends a picture of this package in action on their robot!