rxbag is a GUI tool for visualizing, inspecting and replaying histories of ROS messages.

Some icons from the Silk icon pack are used, which is available from famfamfam.com.

rxbag is a GUI tool for visualizing, inspecting and replaying histories of ROS messages.

Some icons from the Silk icon pack are used, which is available from famfamfam.com.

rxbag is a GUI tool for visualizing, inspecting and replaying histories of ROS messages. Some icons from the Silk icon pack are used, which is available from famfamfam.com.

rx packages are replaced by rqt, which is available for fuerte and later.

rxbag is an application for recording and managing bag files. Its primary features are:

rxbag can be extended via a plugin mechanism. Core plugins are contained in the rxbag_plugins package in the visualization stack.

To run, pass the filename of a bag file, e.g.

The main window shows a timeline representing the stream of messages contained in the bag file, listed by topic. 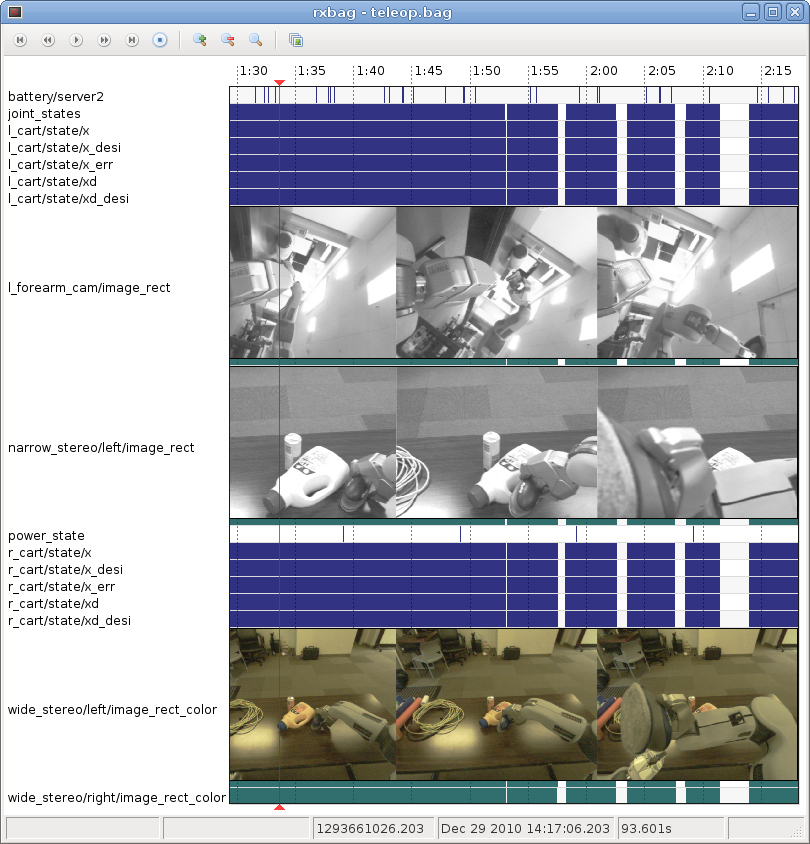 The messages are shown at the timestamp stored in the bag file. This timestamp may differ from the message's Header timestamp (if any), e.g. rosbag record stores the time the message was received.

Right-clicking on the timeline opens a menu with options for opening detailed message views, choosing which topics to display thumbnails for, managing re-publishing of messages, and exporting a time range of messages to another bag.

At the top of the timeline window is a toolbar for controlling the playhead and zooming the display:

From left to right, the buttons on the toolbars allow you to:

Also, the timeline can be shifted later or earlier using the arrow keys (Left and Right respectively.)

At the bottom of the window is a status bar:

From left to right, these indicators display:

Message views display information about the message immediately preceding the position of the timeline playhead (the vertical red line.) The message datatype determines which message views are available.

For details on common message views such as images and plotting, see rxbag_plugins.

Every message view has a toolbar for stepping the playhead forward to the next message on the topic, back to the previous message, or to the first and last messages in the bag. 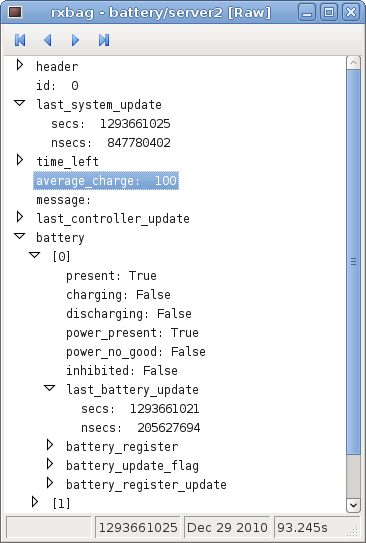 Also, the following keyboard shortcuts can be used:

String representations of message fields are truncated to 50 characters.

rxbag currently has a proof-of-concept plugin API, which is used in the rxbag_plugins package. Future versions of ROS will have a more stable API to more broadly support plugins.