Note: This package originated as pr2_teleop_booth and wasn't released before ROS Hydro.

This section will focus on the executable pr2_teleop_general_joystick, which allows control through a PS3 joystick controller.

There are several launch files offered for convenience. The first can be accessed using

This launch file enables body control, head control, and arm control but disables prosilica control. It also starts pr2_kinematics nodes for the left and right arms, which are necessary for joystick control of the arms and enabling walk_along_mode.

implements the same functionality but does not launch arm ik nodes, assuming that they are already running from another launch file.

disables arm control altogether and starts no processes associated with the arms.

Before use, the PS3 controller must be "paired" with the robot. If your controller is not already paired, you can pair it by pressing the center button, shown in the image.

There is currently no feedback from the controller or the robot during or after pairing. The best way to tell if they have been paired correctly is to try issuing commands to the robot via the joystick as described below. 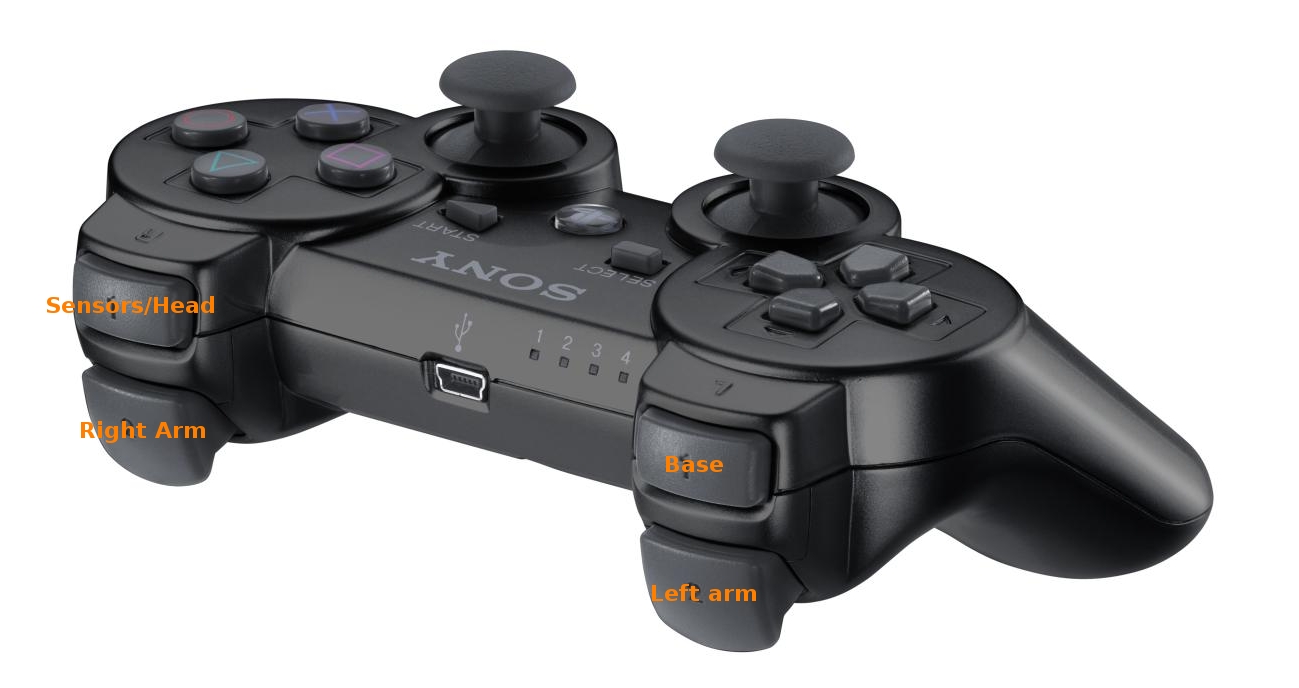 In base control mode the operator can move the base or raise and lower the torso.

This mode permits the operator to control the head, control the tilt of the laser, turn the projected light display on or off, and to set the "follow me" mode. 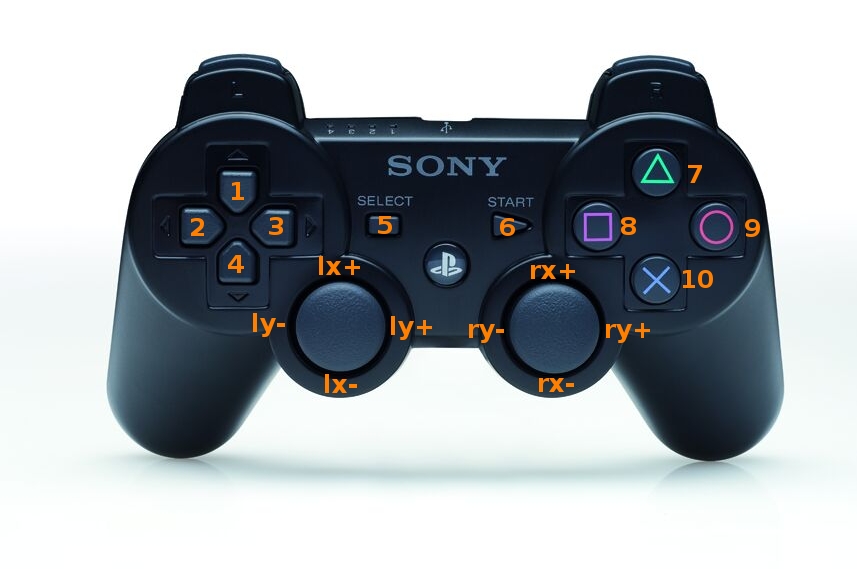 Accessing this mapping requires that the upper right front button be depressed - see the above image.

There are four control modes for the head. The first is position control, which allows the head to be tilted and panned using the analog sticks. The second and third modes point the head at the right hand hand and the left hand respectively. The final mode places the head in mannequin mode.

All of this assumes that the top right front button is depressed. In order to get into follow me mode you must double-tap Select. This will move the arms into a position in front of the robot. Do not interfere with the arms as they are moving, and make sure they have clear paths. Once in position press Start in order to initiate follow me mode. The robot will nod its head if everything was successful. Otherwise it will shake its head. To exit follow me mode press Select once.

The base control is accessible by pushing the top left front button. Base and torso controls are essentially the same as that described in pr2_teleop.

The lower front buttons control the arms. The arms may be controlled individually by pressing only one of the front two buttons. If both arm buttons are held any commands will be issued to both arms.

This section will focus on the executable pr2_teleop_general_keyboard, which allows robot control using the keyboard.

There are three launch files which largely mirror the functionality described for the joystick:

brings up arm ik and allows control of all modes

does not bring up ik nodes, assuming they are running elsewhere.

allows control of only the body and the head.

Interacting with the program

The program brings up text guides that describe the function of the keys.

ROS parameters for joystick and keyboard

As a convenience the joystick and keyboard programs implement largely the same set of ROS parameters:

There are many parameters offered by the modules that will generally not need to be changed by the users. Here we list two of the most important.